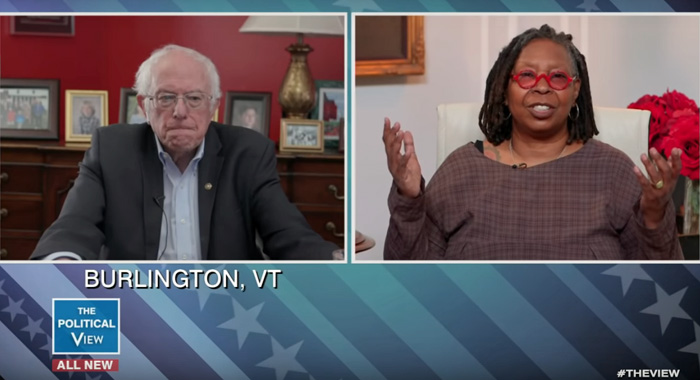 In a move normally reserved for putting a cork in Meghan McCain, Whoopi Goldberg snatched up Bernie Sanders on Wednesday’s The View by asking him point blank why he hasn’t dropped out of the Democratic primary and if he plans on repeating 2016 all over again, which are both very fair questions because, seriously, what the hell is Bernie doing? The math is against him, and yet here he is still drawing this thing out and furthering a divide between Democratic voters. Again.

“I have to ask you this question now because I have been watching to see what you were going to do, and I’m told that you intend to stay in this race for president because you believe there is a path to victory,” Goldberg said. “I want to know what that path is because this feels a little bit like it did when you didn’t come out when Hillary Clinton was clearly the person folks were going for.”

As he started to protest, she asked, “Can you explain why you’re still in the race and what this path is that you see?”

“That’s not quite accurate,” Sanders replied. “I worked as hard as I could for Hillary Clinton.”

Following a tense back and forth over how long it took Sanders to back Clinton after refusing to end his campaign until the Democratic convention — Which some might say set the stage for our current predicament, and by some I mean me. I’m saying that. Goddammit. — Whoopi once again asked Sanders more bluntly why he’s still in the race.

From there, Bernie launched into his new stimulus package, and Whoopi made the best point of the whole segment. Why doesn’t he focus on that instead of his campaign that’s going nowhere? Which might seem like a backhanded compliment, but it does play to Bernie’s supposed strengths. He should be focusing on being a senator and bringing relief to Americans who are watching their lives swallowed whole, not wasting his time on a vanity run that has no path to the White House.

Naturally, Sanders’ supporters are already flinging conspiracy theories about how this is another example of how the corporate media is out to get Bernie (Remind you of anyone?), but if there’s been one incredible silver lining about this whole primary, it’s that it proves just now completely divorced Twitter is from reality. And I say that as someone who is hopelessly addicted to the platform. But it really has been fascinating to watch just how empty Bernie’s movement was as it got completely stomped by Democratic voters, not the DNC, voters. They can piss and moan all they want, and accuse black voters of being rich boomers who hate young people, but at the end of the day, it doesn’t matter. If you can’t show up to vote, your words mean shit.

So with that in mind, I’m not going to waste too much time getting into the extremely online reasons why Bernie should continue because he’ll never have the votes, so they mean nothing on top of being flat out ridiculous. Not only are his Twitter supporters openly hoping the pandemic wipes out older voters, but when they’re not accusing Biden of having dementia, they’ve literally tried to float the idea that he died from the coronavirus. (I’m not even joking.) As for the latest attack that Biden is a rapist, I don’t want to off-handedly dismiss that allegation, so I highly recommend Amanda Marcotte’s even-handed assessment, which I think gives a fair shake to both sides of that quagmire. We’ll leave it at that.

On a personal note, I’m still getting texts from Bernie’s team in PA where he is still actively campaigning while the state is now on stay-at-home orders. As Sunny Hostin notes during another segment, it sure seems a hell of lot like Bernie is trying to leverage the pandemic to his advantage. Is that the case? Well, he’s certainly not working to back the only alternative to a president who dropped this disaster in our laps through pure incompetence and a dangerous penchant for self-preservation.

← Spoiler Review: Netflix's 'Freaks' Culminates In the Sorts of Moments Great Fiction is Made Of | 5 Shows After Dark: 'The Masked Singer' on Fox, 'Garth & Trisha Live!' on CBS →