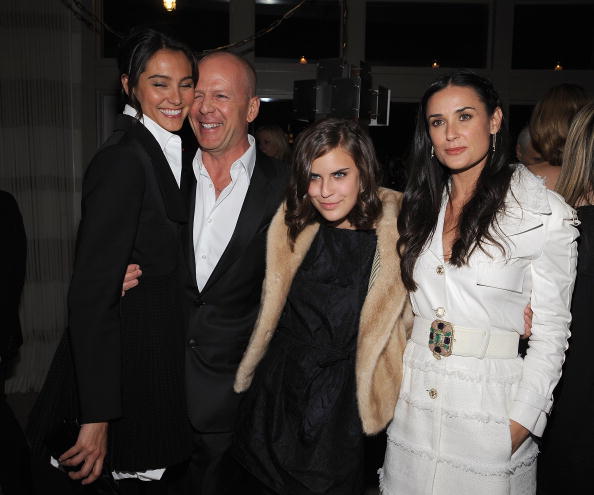 The Real Reason Bruce Willis Is Quarantining with Demi Moore Instead of His Wife, Emma Heming

Shut down the presses. The answer behind the biggest mystery of the pandemic has been resolved: Why is Bruce Willis quarantining with his ex-wife, Demi Moore, and their three daughters, instead of his current wife, Emma Heming, and their considerably younger daughters, Mabel, 8, and Evelyn, 5.

Family book club… ⁣ How to Rule the World from Your Couch — quarantine edition.

Honestly, it should have been obvious to us all from the beginning. It was about hypothermic [sic] needles the entire time! As Scout Willis — one of the older daughters of Bruce Willis and Demi Moore — explained on the Dopey podcast , Emma Heming and the five and eight years olds were supposed to be quarantining along with Demi Moore, Bruce Willis, and the others in the Idaho home that Bruce and Demi raised their three daughters. However, Bruce left early, but Emma had to stay behind to await the results of a test.

“…My younger sister, who is now about to be six years old, at a park, had never gotten the talk about not f**king with hypothermic needles that she found so she actually tried to poke her shoe with it and poked her foot.” Damn! Anyway, Emma and her daughters waited behind to make sure that she wasn’t infected by anything in the hypodermic needle, and by the time that the results came back, it was too late to travel, “so my stepmom stayed in LA with my little sisters.”

Bummer. On the plus side, it has allowed Rumer, Scout, and Tallulah to spend a lot of time with their parents in the home they were raised in. “It’s been so funny because to me they’re just like my super f**king weird parents but to everyone else, they’re at this different level,” Scout said. “It’s actually been really cool.”

Riddle solved. Also, I am willing now to concede that the Willis/Moore/Heming blended family is admirably functional.


← Spoilers: The Ending to Hulu's 'Little Fires Everywhere' Is Better Than the Book | 5 Shows After Dark: 'The Masked Singer' on Fox, 'Seat at the Table' Premiere Vice →