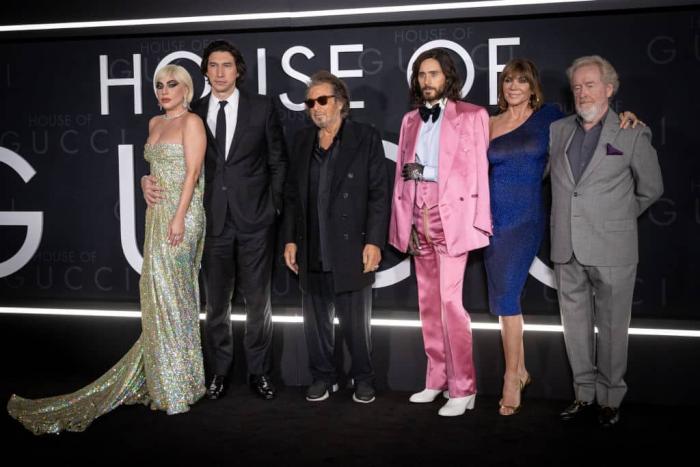 The Actual Guccis Aren't Happy About the Fake Guccis

The heirs of Italian fashion house Gucci have criticized Ridley Scott’s sort-of biographical drama House of Gucci for its portrayal of their family. In a letter signed by the heirs of Aldo Gucci, the former company chairman who is played in the movie by Al Pacino, the family wrote: ‘The Gucci family reserve the right to take every initiative (necessary) to protect their name and image and those of their loved ones.’

According to the website ANSA, the Gucci family took umbrage with how Scott’s film falsely portrayed them as ‘hooligans’ who were ‘ignorant and insensitive to the world that surrounded them, attributing to the protagonists [and] events, a tone and an attitude that never belonged to them.’ They also called out the depiction of Patrizia Reggiani, the former wife of Maurizio Gucci who served jail time for hiring hitmen to murder him. According to the family, Reggiani is portrayed ‘not just in the film, but also in statements from cast members, as a victim trying to survive in a male and male chauvinist corporate culture. This couldn’t be further from the truth.’

Reggiani herself had initially disapproved of the casting of Lady Gaga as her younger self but eventually gave her the thumbs up. She did, however, say that she was ‘annoyed’ that Gaga didn’t meet with her out of ‘respect.’

No legal action is currently being taken by the family against the film and its producers. The Guccis themselves have not been connected to the fashion brand Gucci since the ’90s. Ridley Scott has already previously dismissed the family’s criticism of his movie, telling the BBC, ‘I don’t engage with that.’

It’s understandable why the Guccis would feel this way. I mean, we all heard the accents and saw that Jared Leto cringe-fest of proportions so hammy that one could smell the pancetta. There’s no easy way to warm to someone else telling your family’s story, especially when you’re not directly involved with the production. That in and of itself is an increasing rarity in modern biopics, where bending over backward to satisfying the subject’s estate is par for the course (hello, every major musician biopic of the past thirty years.)

The bigger issue here is one of artistic freedom and what you can and/or should do when using truth as a platform to explore wider issues and themes. You totally see how Ridley Scott, a filmmaker fascinated by the corruptive nature of power and the ways it warps human consciousness, would look at the Gucci story and see stars in his eyes. You can see this at play in films like Gladiator, The Last Duel, and All the Money in the World, stories using historical figures to tackle wider notions of hierarchal structures and the toxicity that permeates them all. Hell, look at Succession: Is it truly possible to have that much money and power and unchecked privilege and not turn into a twisted little creature? Scott certainly doesn’t think so. It’s one of the most interesting aspects of his filmography, his evident disdain for the so-called cream of the crop.

Of course, it’s one thing to tell that story with real-life people who died over a century ago, and quite another to do it when their offspring are still here to tell the tale. House of Gucci was never being sold to the world by the studio as a damning indictment of Reggiani. It’s being marketed as a camp-fest with Muppets-esque accents and fashion porn. The Gucci name isn’t just a family one. It’s a highly profitable and achingly well-maintained brand run by a company that has nothing to do with the dynasty that created it. All of this makes dealing with the truthiness of the Maurizio Gucci murder much trickier territory. And that doesn’t even get into the Jared Leto sh*t.

Still, while I sympathize, I’m also not in favor of allowing the subjects/families/estates of biographical subjects to dictate the content. We see how that ends up leading to some ridiculous whitewashing of history with crap like Bohemian Rhapsody. There’s no easy answer here, just one of artistic judgment and empathy. And also not casting Jared Leto. That’s common sense.