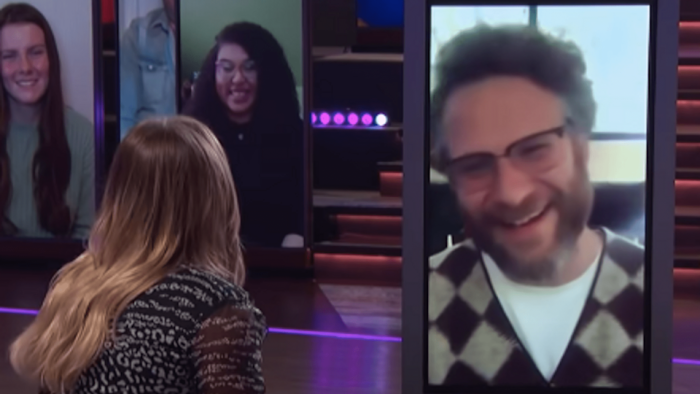 Look: Kelly Clarkson confronting Seth Rogen about writing the “KELLY CLARKSON!’ line for Steve Carell is the exact speed I’m at today. This is the content I crave.

As Clarkson explained it on her talk show yesterday, she is more associated with Carell’s exclamatory utterance while having his chest waxed than anything she’s ever done in her career. When she walks down the street, people scream, “KELLY CLARKSON!” and not because of her music or her talk show, but because of 40-Year-Old Virgin.

Rogen, meanwhile, explains that Apatow asked him to come up with a buffet of possible exclamatory utterances — some dirty, some clean — and we get a preview of his notes, which included the other alternative possibilities, like “throbbing monkey tail,” “farting jezebel,” and I believe “burger f**ker.” Ultimately, Clarkson’s inclusion on the list came because Rogen was “sitting on my couch writing the jokes and you came on television. I saw you and it was Kelly Clarkson!” Apparently, “K” sounds are also more likely to do the trick. Who knew?

Seth Rogen, meanwhile, is promoting a memoir, which includes tales of bizarre encounters with Tom Cruise and George Lucas, among others.