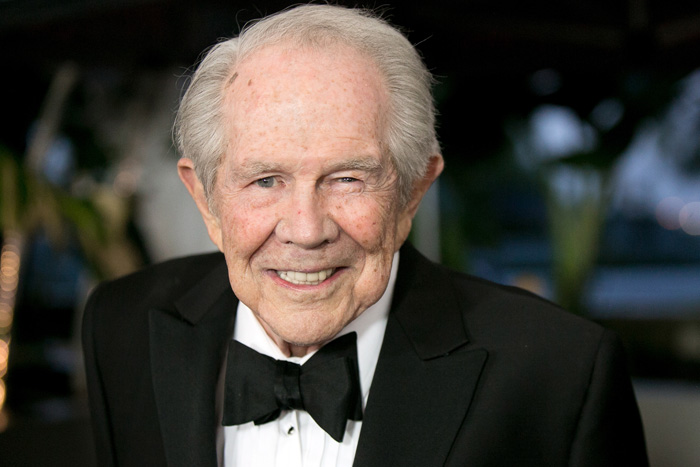 No, Pat Robertson Didn't Say Oral Sex Caused the Pandemic, but He Does Promise It Will Be Over by Easter

So, first things first. As some of you might know because, like me, your lives are hopelessly entangled in social media with no chance of escape, there was a viral tweet going around where Pat Robertson supposedly blames our current pandemic on young people doing mouth stuff.

Fear not everyone, Pat Robertson has worked out what caused the Coronavirus; oral sex! With women! Which they didn't have when he was younger! pic.twitter.com/gC41NthO9W

Sadly, the quote came from a satire site, but it spread so far and wide that goddamn Snopes had to step in, and as of this writing, it’s currently the number one search result for Pat’s name. So for the record, in case you hear it from some kids on the bus, no, Pat Robertson didn’t blame a global outbreak on cunnilingus. Although, give him a minute, and he might point a finger at his old enemy Facebook witches. You gotta be careful before tossing that one out there. Too soon, and you scare off the witches. Too late, and they possess your ultrasound photos. It’s a whole thing.

Anyway, what Pat has done, however, is waited until 11,000 Americans have died from what he calls an “inert virus” before getting to work rebuking it in the name of Jesus on today’s episode of The 700 Club. He’s also giving God a strict deadline that will sound very familiar, and I’m sure the big guy’s going to jump right on it. “As you wish, Christian Dumbestdore!”

Do you realize what has happened? This is an inert virus, and we have cowered before this inert virus. It has destroyed our economy. It has put panic into our entire population. It’s disrupting all of our way of living. And it is closing the churches of Jesus Christ, and people are not able to go and worship together in their churches because of this bug.

And I think it is time for the church to go on the attack! Instead of just cowering in our cars and in our social distancing, I think it’s time that we stand up and speak the word of God and command that thing to leave us!

All the people, all the pastors, all across America, in your services, even if you have to speak in FM radio or speak to cars or whatever you do, declare it boldly! I want you to pray with me right now, “Father, in the name of Jesus, we come before You as the author of life, as the Creator of all life. Lord, this is Your universe. This is Your world. And Your people, God, have been terrorized by this inert virus. And so we come in the name of Jesus and the power of the Holy Spirit and we rebuke this thing! And we command it to leave our society and our land. And by the day of Easter, that there will be no more new cases of this coronavirus. In the name of Jesus, we speak that, and we declare it done in His name. Amen! And amen.

Just so we’re clear, Pat Robertson has demanded that the virus end by Easter, which you can easily tell is an absolutely butt-stupid timeline because even Donald Trump abandoned it. That orange pissbag went from calling for church pews to be filled to closing down the entire country until the end of April. And, yet, here’s old Pat saying, “Nope, we’ll have this thing knocked out before the egg roll.”

Naturally, Pat’s remarks also expressed concerns about the economy, which puts him in league with such batshit evangelical pastors as Rodney Howard-Browne and Jonathan Shuttlesworth whose Twitter accounts are littered with right-wing pundits calling to end social-distancing today for the sake of stock portfolios and so Americans don’t look like pussies. (The meek shall inherit the what?) Because if there’s one thing Jesus was famous for, it’s his deep love for the rich. You can’t even make it past the first book of the New Testament without him saying things like, “Billionaires can’t miss, love ‘em” or “Hey, you know who you should never look out for because I hate them so much? The poor.”

← The 'Manifest' Season Finale Is a Disaster | 5 Shows After Dark: 'Schitt's Creek' Series Finale, 'Hot Ones' on TruTV →