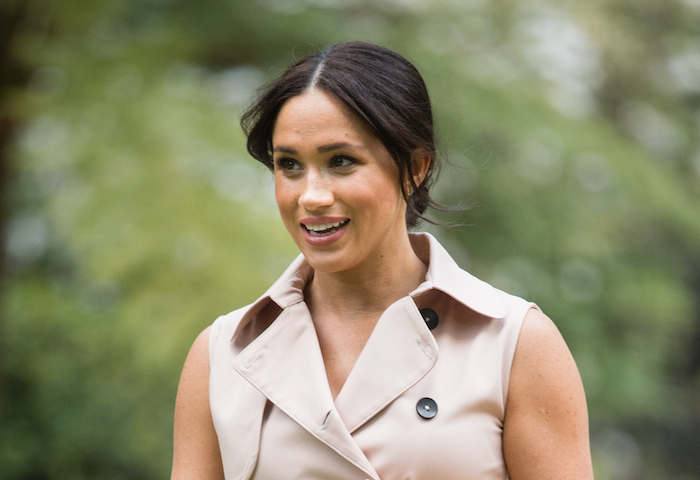 Poor Meghan Markle, what did she expect? I’ve spent a lot of time over the past few days thinking that, spinning the thought around in my head—because whatever she was expecting when she joined the Royal family, it certainly wasn’t *gestures wildly* all this.

In case you missed her gut-wrenching admission that she wasn’t OK, here it is:

I so admire #MeghanMarkle for being honest, open and vulnerable about the struggles she’s faced as a new mother and very public figure. #WeLoveYouMeghan pic.twitter.com/mWpFOwVeLk

What I’ve gotten hung up on, is this: Meghan Markle grew up in LA, a city notorious for its as*holes. One of the rudest, self-centered cities you could ever possibly go to, and still, the vitriolic, racist bulls*it the press have heaped on to her is enough to hurt her.

Then, let’s take in to account that not only is she from Los Angeles, the city of as*holes, she went into the entertainment industry. If Los Angeles is the city of as*holes (and we are, friend) then the entertainment industry is where as*holes go to level-up in this town to achieve their true as*hole potential. This is an industry that protected Harvey Weinstein, Matt Lauer, Bryan Singer, Kevin Spacey, the list goes on and on and on—and she was successful in it! She has probably seen some of the worst that humanity has to offer—and still, with all of her media training and experience with terrible people doing terrible things, she couldn’t keep the happy façade up that is required of our public figures. That’s how bad it’s been for her.

Meghan Markle was so successful in her career that she became a series regular on a cable show (Suits), and as a result, had to uproot her life in Los Angeles to move to Canada, away from her family and friends. She knows what it’s like to feel alone, in a foreign country where people act differently than what she’s used to, where even if they speak the same language, almost everything else is other. She’s used to the alienation of that and she knows there’s a learning curve to figuring out the ropes—and yet still, you can see it in her eyes in the clip above, the feelings of being alone, undefended without your people to back you up are there. It’s as if the secret sauce of how to make it stop and fit in is just out of her reach, and no matter what she does, she’ll never learn its alchemy.

Now let’s get into her personal life—she was an actor on a fairly well-known show. She got married while she was on it, and she got divorced. The point being is that there was some level of interest in her personal life pre-Royals, so she had some grasp of understanding beyond what you and I would have, how people feel entitled to know personal details about private aspects of her life. Yet still, the attention from the press has been so dehumanizing for her that she is launching legal action in the UK to hold publications accountable for it.

Then there’s her family. Let’s tackle the one she married into, first.

She was very much alive and cognizant of what happened to her mother-in-law, Princess Diana, before she met Prince Harry. The unfairness of how every pound she gained was scrutinized and printed for the world to see, every moment she tried to have in private was pried from her grasp, and how eventually, the tabloids literally killed her by chasing her car into a tunnel in Paris.

She is married to Princess Diana’s son, so she knows first-hand, far beyond what any of us could imagine, the true dangers the tabloids pose to her. She went into her marriage with clear eyes, and still, whatever she thought she was getting into, she didn’t think it would be this bad.

Finally, there’s her own family. Consistently betrayed by her father who sells memorabilia of her life (including personal letters) to the highest bidder. His children make a spectacle of the half-sister they barely know, screeching to whoever will pay them about how she’s a disgrace to the world and the extended family that by all appearances, had nothing to do with her before she met Prince Harry.

Her father’s side of the family is white. Meghan Markle was primarily raised by her black mother. I can’t speak for her directly but using an ounce of common sense (and seeing how trash the Markle side of the family is) dealing with the racist undertones of one side of her family’s sh*tty attitudes towards her is most likely not a new experience for Meghan. She has had to navigate the familial politics that are now on display for the world to see, for years. She knew (even if she didn’t want to believe it) the Markle side of the family, which included her own father, was trash. Yet still, she’s launching legal actions against the publications that printed her deeply personal letters to him, without her permission because her own father sold her out.

Like I said at the beginning of this post, I can’t get over how this woman went into this situation with clear eyes. She thought she understood the amount of s*it that was going to be flung at her, and she, more than most of us, was prepared for it. Yet still, she is not OK because it is that bad.

My heart goes out to her. She seems like a decent person who fell in love and wanted (and appears to still want) to use her newfound global platform to do good works, and be a kind, decent person.

The thing about kind, decent people is that there is always a part of them that expect everyone else to want to be kind, decent people—that’s why they’re kind and decent. Cruelty must have a point if you have that mindset—and if you can get to the root of its cause, maybe it can stop.

Kind, decent people have an extremely hard time wrapping their head around the notion that cruelty is sometimes its own endgame and its own reward. That some people are cruel not because of a deep hurt in them that is screaming out to be resolved but because they enjoy it or even worse, they simply don’t care about anyone else’s humanity.

It was announced this weekend that she and her husband are going to take six weeks off from their Royal duties to just live their lives. I hope during that time she’s able to catch her breath, decompress, and that by slipping away from public life for a while, there is a cease-fire in the press.