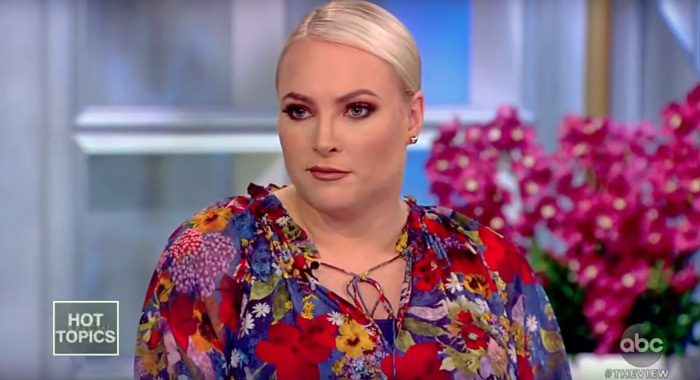 Meghan McCain Is the Real Victim of 'Send Her Back' Chant (Yup, We're Doing This Again)

Barely 72 hours ago, Meghan McCain had the flaps to go on The View and complain that Donald Trump’s racist tweets that essentially told The Squad to “go back to Africa” is making her life difficult, not the four WOC who have been watching in real-time as the goddamn President of the United States stirs up a nationwide lynch mob that’s aimed directly at them. By the next morning, Meghan was right back to being a good conservative drone and attacked The Squad for [insert whatever Fox News says here] because I guess her life really wasn’t that difficult after all. Oh well, it’s not like she’d pull the exact same sh*t twice in one week.

She did. Didn’t even hesitate.

While looking like a centerpiece with resting b*tch face, Meghan once again painted herself as the victim of a jarringly racist attack perpetrated by Donald Trump. This time, a rally in North Carolina chanted “send her back” in reference to Ilhan Omar, which is somehow both surprising and not surprising because everyone who voted for Trump is a full-on f*cking racist who isn’t going to vote for you even if you politely pamper their balls and tell them they’re economically anxious snowflakes who don’t mean to hold modern-day Klan rallies. (You can’t see my eyes, but I’m looking directly at Bernie and Joe Biden right now.)

Anyway, while the only person we should be concerned about right now is clearly Congresswoman Omar, Meghan would like to suggest that the wronged party is actually a millionaire squawking head who can’t attack a minority politician on daytime television without looking super f*cking racist. Won’t someone think of the Meghan?!

Via Raw Story (Emphasis mine):

“It was really dystopian,” McCain said. “I was trying to go out to dinner and ignore politics. My family is in town, and came home and saw it on Twitter and then saw it on TV, and look.”

After news of Trump’s racist rant spoiled her evening out with relatives, McCain said she realized that his remarks had robbed her of something else.

“Everyone at this table, and I think, people that watch this show or have ever seen the dumpster fire of my interview with Seth Meyers know I have been one of Ilhan Omar’s most vocal critics regarding Israel, regarding some of her comments I and others interpreted as anti-Semitic,” McCain said. “But the problem right now is, you’re taking away my agency to criticize her policy.”

Is it normal that my arm is numb right now? Should I talk to somebody? Because JESUS FART, MEGHAN. There is tone-deaf, and then there’s cramming two gallons of Hellman’s in your ears until the only thing you can hear is the sound of John McCain’s DNA rushing through your oblivious veins. And speaking of MY FATHER©, we should’ve seen this white lady nonsense coming at us like a rogue Macy’s Thanksgiving balloon filled with guns and Jell-O shots because Meghan’s dad has been trending on Twitter thanks to this clip.

For anyone who needs reminding of how a lot of Republicans like me were raised and how we view the world. I love you Dad and I've never missed your leadership more.https://t.co/OdXvTqlH4u

Yes, one time John McCain exhibited a bare minimum amount of human decency by shooting down a woman who made the mistake of saying the racist parts about Obama out loud. (MY FATHER© prefers more Asian-themed bigotry. Thank you very much.) Then his campaign turned around and put Sarah Palin on the ticket to ratchet up the dog-whistles, which cemented the Republican Party on a course for Trump. So, wow, what an incredible profile in courage.

But the Republican deification of John McCain hammers home how little his daughter comprehends where her worldview comes from along with her refusal to challenge it. Does she even know why she disagrees with Ilhan Omar so much besides that it’s the “hardcore conservative” thing to do? Because if I started to notice that my thoughts and opinion are strikingly similar to Trump’s Confederate Army, that would give me a whole lot of pause and make me question where I’m getting my political opinions from. In Meghan’s case, she’s told us repeatedly that it’s Fox News, so let’s see how they handled the most racist Trump rally to date.

Fox News host Jesse Watters appeared to a make a racially insensitive joke about the Democratic representatives who are members of “the Squad” on Thursday: "I’d grab my wallet" if I met "the Squad" https://t.co/hZuBvvDPZ0

Wow, goddammit. That’s definitely saying the quiet parts out loud, which MY FATHER©, an honorable man, wouldn’t stand for. You either silently bake that racism into every single policy and initiative you support, or you let some nutjob from Alaska blurt it out so you have plausible deniability and still get to go on SNL. That’s clearly the type of leadership that’s so desperately missing from Washington today.