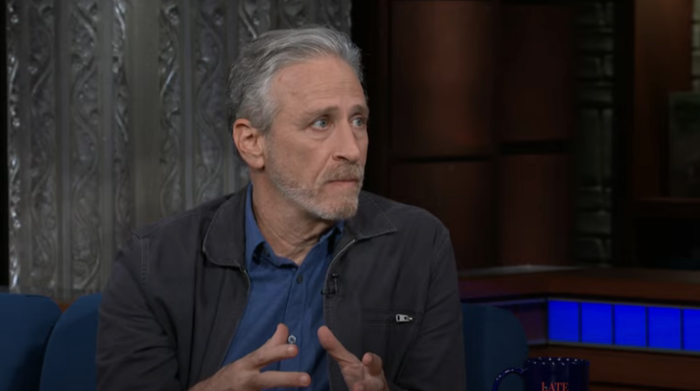 I don’t often watch Jon Stewart’s Apple TV+ show, The Problem, beyond the interviews that circulate around the Internet, but I do listen to his podcast regularly because it is a good podcast. He does what we want journalists to do, which is to invite experts on to discuss issues upon which they have expertise. Do you want to talk about inflation and the state of election politics in swing districts? Katie Porter is the perfect person to have on. You have Iranian-British journalist with BBC Persian Rana Rahimpour to talk about the #MahsaAmini protests in Iran, and you have law professors — Leah Litman, Melissa Murray, and Kate Shaw — on to talk about the United States post-Roe. That’s so much better than seeking the opinion of a Republican politician about puberty blockers.

A few weeks ago on his podcast, he talked at length about this latest wave of antisemitism ushered in by Kanye West. He made his jokes — as Jon Stewart does — but he also spoke soberly about the situation, about how surprised he was that Kayne had so much influence, how “it fucking sucks when your demographic becomes a part of a hashtag campaign.”

“Anytime you see celebrities say, ‘I stand with Jews,’ it’s not necessarily about standing with and having that moment on Twitter. It’s about understanding how deep the division goes and how it’s used cynically for power, as is being done now.” He added that he didn’t really care for the “I stand with Jews” campaign because it made him feel like a prop, like he was being othered.

“It’s such an interesting conundrum,” he added, “because any pushback [by Jewish people] is seen as evidence of the efficacy of what [Kanye] says,” which is exactly the point Chappelle made in his SNL monologue when he said that if you say anything about Jewish people in Hollywood, you will get canceled. Our collective efforts to expose Chappelle’s antisemitism this week prove both Stewart’s and Chappelle’s points, and not in a good way.

Stewart appeared on The Late Show with Stephen Colbert last night and spoke at length about Chappelle, Kanye, and Kyrie Irving. I’ve seen a couple of outlets characterize it as “defending Dave Chappelle,” but I don’t feel that’s accurate, although it would be easy to cherry pick quotes from the interview to support that belief. But Stewart was hurt by it. “Don’t get me wrong,” Stewart says, conceding that it is painful “when people I admire and people whose music I like or things like that come out and say, ‘How many of you [Jewish people] are in show business?’”

But the bigger point he is making is that yes, he is friends with Dave Chappelle, but he is not Hollywood’s spokesperson for Jews, and shutting down the conversation helps no one. Stewart doesn’t think that Dave Chappelle normalized antisemitism because antisemitism had already been normalized. Suspending Kyrie Irving for five games because he’s antisemitic won’t make him less antisemitic, Stewart says (in fact, it will be “seen as evidence of the efficacy of what [Kanye/Kyrie/Chappelle] says”). I personally believe the suspension is warranted not because it’s going to cure Kyrie Irving of his antisemitism but because it shows everyone else that antisemitism is not OK.

Nevertheless, it’s good to get it out in the open and talk about it, Stewart says, and there’s probably some truth to that. I hate that Dave Chappelle was given a platform to amplify antisemitic tropes and conspiracy theories. It sucks that so many people have defended Chappelle (holy shit, you should see my emails and Facebook replies this week). Still, we have also been able to discuss antisemitism in ways that we could not with Kanye because so many people chalked up his bigotry to mental health issues. (I also don’t understand why more people are not talking about the role of the growing influence of radical Hebrew Israelites).

But Stewart also doesn’t square his earlier thoughts on Kanye and his current thoughts on his “friend,” Dave Chappelle. When it was Kanye, Stewart said that all of this had made him very nervous. “It has clearly exposed a very deep vein of” people disapproving of Kanye’s comments while also agreeing with them, which made Stewart uncomfortable. And yet, that’s exactly what Chappelle did in his SNL monologue. When Kanye did it, it made him nervous. When Chappelle did it, Stewart says we need to bring it out in the open and discuss it. “Look, people think this,” Stewart told Colbert. “People think that Jews control Hollywood. People think that Jews control the banks, and to pretend that they don’t, and to not deal with it in a straightforward manner, we will never gain any kind of understanding.”

I don’t disagree. I also think there are better ways to bring it out in the open than for one of the most popular stand-up comedians on the planet to joke in front of an audience of millions that Jews control Hollywood and the International banking system. J.K. Rowling gives us plenty of opportunities to talk about transphobia, too, but that doesn’t justify her transphobia. All it does is embolden transphobes, and all Chappelle’s monologue managed to do was embolden antisemites.