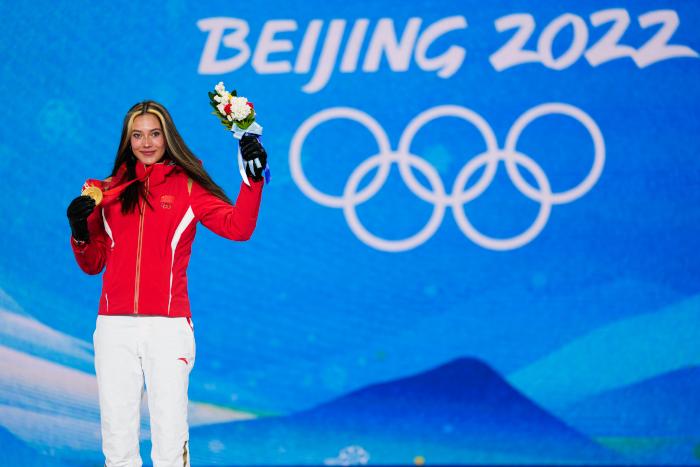 Eileen Gu Is a Teenager, Not Your Geopolitical Pawn

Hey, remember that other geopolitical conflict between superpowers?

Beijing’s Winter Olympics ended a few weeks ago, and they were a complete shitshow. US’ ratings went down the toilet, to the surprise of no one, we realized Russia’s figure skating team is founded on child abuse (and the IOC did jackshit to address it), China’s promise of a “green” tournament was bulls**t, the games were played under the shadow of China’s general track record of human rights abuses and this horrible story in particular, plus your regular double-standard sexist mistreatment.

But if there was one silver lining for the Chinese government is that these games saw the birth of a star in Eileen Gu, the American-Chinese freestyle skier who scored two gold medals and a silver one at only 18. She has a bright future ahead of her, and not only as a sportswoman: with dozens of modeling and endorsement contracts, she’ll probably be able to build a whole brand around her. To cap it all off, she was accepted into Stanford. So, what’s the problem then?

Well, she was born and raised in the USA, to a white US father and a Chinese mother, but with strong links to her mother’s homeland, so she decided to compete for China. And people lost their god-damned-minds: 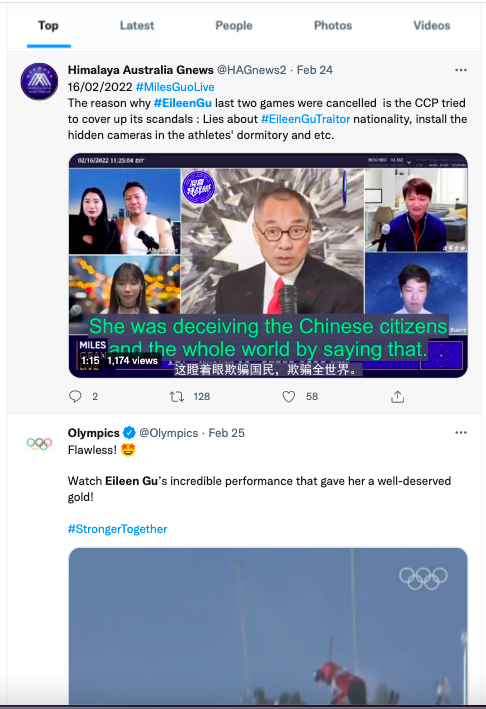 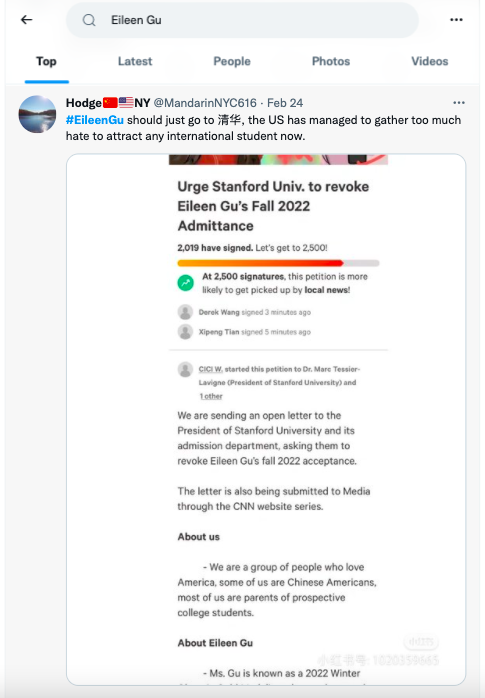 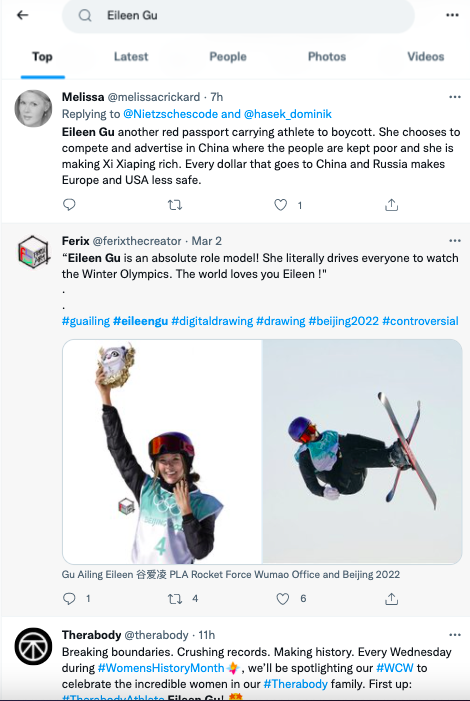 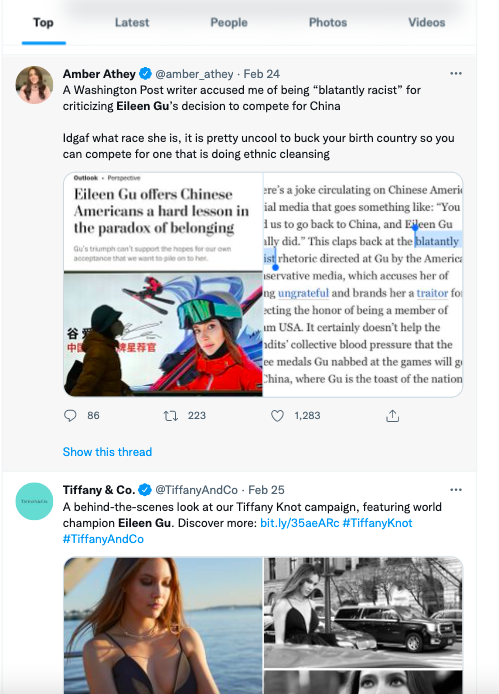 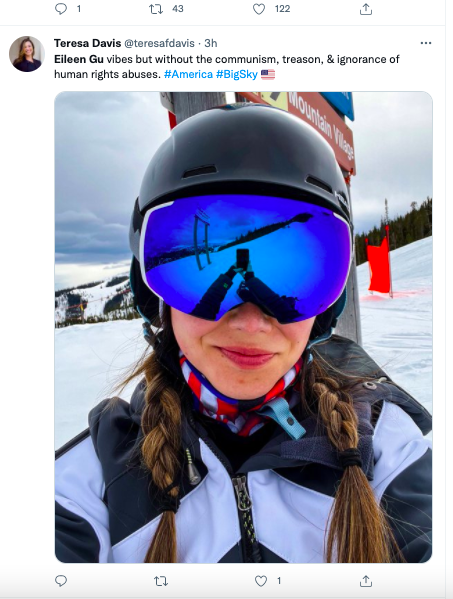 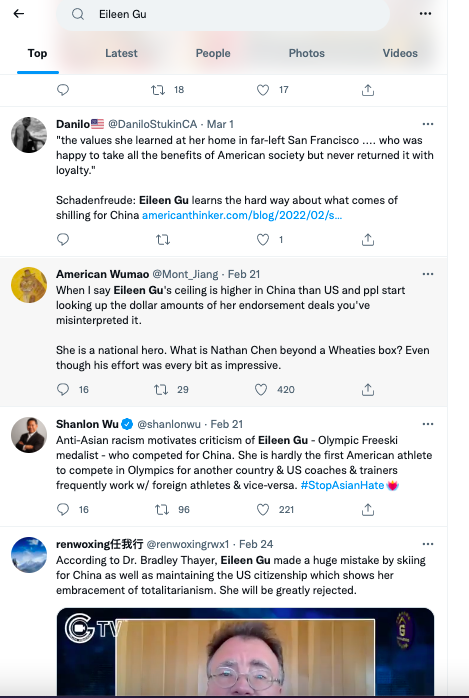 She announced this way back in 2019, right before she began reaping gold medal after gold medal in everything from the Winter Youth Olympics, the Winter X Games and the Freestyle World Ski Championships while becoming the first woman to land a (checks notes) “forward double cork 1440”. One of those Matrix-style aerial stunts that I’m guessing can only be followed with a 120 fps camera. So, all in all, a remarkably impressive young woman.

There is a good-faith argument to criticize her choice to compete for China, and is also the one the bad faith trolls are making: Why wear the flag of an authoritarian Empire involved in the widespread, systemic abuse, segregation and enslavement of ethnic minorities, when she could’ve worn the flag of the undemocratic Empire that systematically represses ethnic minorities in which she was born and raised? Yeah, I know, that’s an unfair comparison. The same one China brandishes to deflect while ignoring the fact that at least ethnic minorities in the US can vote and be represented in Congress. For now. Mostly.

Whether someone thinks Eileen’s decision is short-sighted or makes her a traitor, they both forget the most important part: She’s just 18. Her birthday was in September.

So I ask you, does she deserve to carry the brunt of this geopolitical tug-of-war at an age your brain hasn’t finished developing? Does she have to answer for the policies of two whole-ass Empires at an age most of us are worried about getting into a good College and dealing with our hormonal shitshow? Does she need to make a righteous, ethical decision on foreign policy at an age you are supposed to make one bad decision after another? Does she have to become a “bridge” between two opposing countries? Isn’t that a little bit too much pressure to put on a teenager, who is also a second-generation immigrant with probably a complicated relationship between her two identities?

Do you think, considering all that, her decision makes her “entitled, treasonous brat”? in the words of Steven Crowder, America’s biggest waste of space?

(Allow me this one paragraph to rant: Yo, Steven Crowder, you know what I wish for you? I wish for your wife to leave you for … another person. I wish that she takes away your children and leaves you with court-ordered minimal visitation rights (though you don’t seem to be the kind of father that would make good use of any custody arrangement). I wish the person for which she dumps your fragile-ass makes your wife happier than ever and becomes the main positive, reliable, and loving parental figure for your kids. And I hope that by the time you die, alone and miserable (but rich I guess), your children deal with your funeral arrangements Diane Nguyen-style: like a hassle. Rant off)

Ignoring all the US fascists, there is a good-faith counterargument to the “she’s still a teenager”: She’s far from only a teenager. She is a very bright woman. She got into Stanford. Her essay for the NYT on fear shows that she has amazing storytelling skills (one too many SAT words though, even for my taste) and like any Zoomer, she is active on her social media promoting Black Lives Matter, the fight against the climate crisis and, of course, denouncing the rise in hate-crimes against Asian Americans and Pacific Islanders. But when it comes to China, she has deflected questions.

There’s a parallel, valid counterargument that perhaps Gu only chose to wear China’s flag out of sheer opportunism, making tens of millions of dollars from her endorsement deals in the PRC, from a level of exposure she wouldn’t have gotten competing for the US. There is also a criticism to be made that she comes from economic privilege: Her mother is well-off (a Stanford MBA, who works as a venture capitalist with deep connections in the PRC), and she attended a prep school in San Francisco whose tuition is… wow, higher than Harvard’s? That and her mother being a passionate skier clearly helped her in more effective ways than her desire to “inspire Chinese girls” into the sport. Moreover, one could argue that all that privilege could’ve been an off-ramp for her to just join the US team, the country in which she was able to flourish in ways she perhaps wouldn’t have in China. It’s a valid counterpoint; perhaps it’s true.

The truth is, privilege aside, someone like Eileen Gu was bound to become a star. Sure, freestyle skiing doesn’t bring the same amount of following in the US. But she’s still a gold-medal winner, still yet to reach her prime. Winter sports have a dedicated following and she would’ve become just as prominent and win as many endorsement deals. Think of Lindsay Vonn’s career.

Perhaps the previous argument makes Gu’s decision even more baffling. But then a more interesting picture comes up when you read the extensive profile on her by the New York Times. After reading it, something immediately clicked for me.

She was raised by a single mother and grandmother, traveling to China on a regular basis to visit relatives. Speaking Mandarin at home. According to the article, she declines all questions about her American father. Now, we know nothing about their relationship or whatever the full story is, but as the son of a professional single mother, that’s what clicked for me. Everyone who has criticized Gu has ignored the emotional bonds to her cultural roots. The cultural roots that actually raised her. Now, my father is Chilean too but had he been, say, Argentinian, and had I been raised in Argentina, and had he been as present in that hypothetical as he was in my life, trust me, I would consider myself Chilean.

We also forget that cultural affinity goes beyond any government. We white Chileans consider ourselves of Basque descent before considering ourselves as Spaniards, even though our ancestors arrived 400 years ago. How many Bostonians consider themselves another county of Ireland even though their ancestors arrived between the 1840s and the 1930s? Now imagine being a daughter of immigrants, with deep ties to your mother’s home country, and that country happens to be China and all that cultural heritage/baggage. Is Eileen Gu to blame if, perhaps, she loves both her countries, but feels closer to one in particular? A gut-level decision you would reasonably make as a teenager and a fully-grown adult?

Also, let’s not forget that as an Asian-American person, with all certainty she has been racialized and otherized, even living in San Francisco. Or that she has seen her mother and grandmother being at the tail end of racial aggressions (which is perhaps just as traumatic as experiencing them yourself)? Or perhaps, and this might contradict my own points, the US Government and Olympic Committee missed out on backing her and making her a symbol of US values?

Or that perhaps, in a world that will be marked by cross-cultural pollination and migrants managing multiple identities, that have chosen to forgo the US’ cultural hegemony, perhaps the very idea of nationality will also be fluid?

Perhaps we need to back off from whatever Eileen Gu chooses to do. Perhaps she should be allowed to just be a young woman and let her make decisions on her own. Predictably, the Chinese regime has been using her as a geopolitical pawn; perhaps it’s now the US’ public responsibility not to turn her into anything.

Alberto Cox would still like to invite Eileen Gu to ditch both zero-empires and compete for a neutral hero country that also starts with Chi-le. We would really appreciate the gold medals and, simply put, she would instantly become the greatest winter athlete in the history of the Southern Hemisphere. We have great ski resorts too… just hurry before climate change melts the Andes’ snow!


← F.W. Murnau's Silent Horror Classic 'Nosferatu' Turns 100 | B*tch, Who's Madonna? The Hype and the Reality of the Upcoming Madonna Biopic →