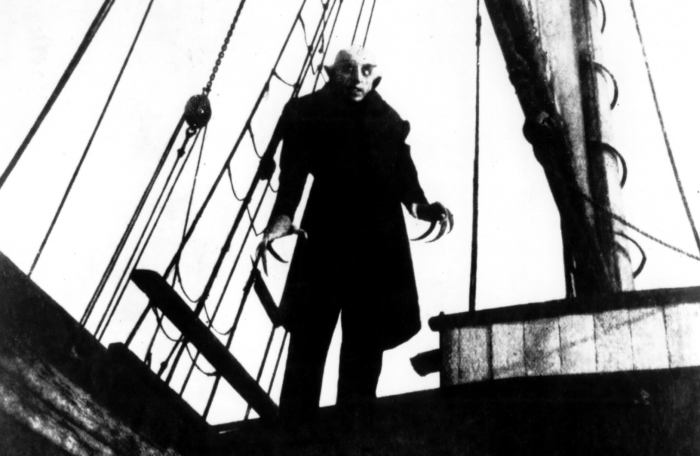 The curse cannot be killed. Many have tried, but the great shadow of the deathbird, as one of its title cards state, reaches up from the tombs of the past and leaves its mark, two to a neck, here into the present. F.W. Murnau’s silent masterpiece Nosferatu was released one hundred years ago this week, galloping up on a tide of war and pestilence and presaging a century of the same—here we are ten decades on looking back not just at this film but at the influenza pandemic and the first World War, not as piles of ash burned up in the sunlight of Modernity, but warnings; unsettling echoes as proof of history’s reach. Those who forget are doomed to repeat, and nothing’s planted its seed more entrenched in our imaginations, time and again, than the myth of the vampire, still here among our shadows and waiting, silently, watching us sleep. The time to feed is forever.

One hundred years is a lot of time for legends to sprout wings, and Nosferatu has many. An entire film was made in the year 2000 built upon the idea that its leading man under the make-up wasn’t actually a man and wasn’t actually under any make-up at all—E. Elias Merhige’s fabulous Shadow of the Vampire has a never-better Willem Dafoe playing the actor “Max Schreck” as an actual vampire, a rat-toothed creature that Murnau (played by John Malkovich) found living in the desolate ruins and decided to train his camera upon to capture true horror, verité-style. Malkovich’s Murnau, obsessed to the point of madness with capturing impossible realities, himself feels an echo of a similarly minded German director named Werner Herzog, who once famously forced his crew to drag an entire riverboat over mountain in the jungle—and Herzog of course himself remade Nosferatu in 1979. That version starred Herzog’s own personal feral madman Klaus Kinski, and I don’t think anybody would be surprised if you told them that Kinski had been unearthed living among ruins, rat-toothed, snatching bats out of the mid-air for his succulent feasts.

Another legend is how Bram Stoker’s widow Florence Balcombe, who ten years after her husband’s death subsisted only on the royalties of his most successful book Dracula, and how she became rightly enraged at producer Albin Grau (more on him in a minute) and Murnau’s efforts to get around paying the estate for the rights to the novel with their adaptation (co-written by Henrik Galeen, and more on him in a minute too) by changing all of the names. And so instead of Count Dracula we have Graf Orlok, instead of Jonathan Harker and Mina Murray we have Hutter and Ellen, et cetera. Yet this legend loses some of the color from its cheeks when you see that Bram Stoker’s book is mentioned as Nosferatu’s inspiration in its own credits.

Whatever the case, whether this was simply a producer cheaping out (likely) or whether the changes were made because the story was relocated to half a century earlier (to feed Murnau’s fixation on German Romanticism) and was being told to a Germanic audience through a Germanic lens, Stoker’s widow won her lawsuit in 1925, and all copies of Nosferatu were ordered to be burned up. However, like any good vampire, Nosferatu proved resilient—the film had been out for three years at that point and one copy (buried in a box of its home earth, no doubt) had made its way to the U.S., where Stoker’s copyright had already expired. And from this print the plague of the vampire spread. And while there remains little doubt that Murnau’s accomplishment established the cinematic power of the vampiric myth and that (along with the mid-20s stage adaptation) led to Tod Browning’s Universal film Dracula in 1931, it would seem by 1992 when Francis Ford Coppola included Stoker’s name in the title of his adaptation that the writer finally had his credit as the father of the bloodsucker properly, fully, intact.

And Murnau perhaps paid a spiritual price for his storytelling theft in the afterlife, when in 2015 grave-robbers made away with the head of his corpse, long entombed in a family plot outside of Berlin since his death in 1931, which came about in a car accident a scant nine years after filming Nosferatu (also less than a month after the release of Browning’s film, the one that cemented the visual of a very different sort of resplendent Count into the cultural imagination). Some sort of candle wax residue was reported found around Murnau’s gravesite, leading to speculation that his skull’s disappearance had occult connections—not a big reach, considering that Nosferatu itself was birthed from such.

The aforementioned Albin Grau, producer, and Henrik Galeen, screenwriter, were both occultists; Grau in particular was fundamental in Nosferatu’s creation as a conduit for his spiritualist beliefs, which were born out of the horrors he witnessed in World War I, as well as folk tales he was told during the war by local Czechoslovakian peasants about the roaming undead. Later Grau would become a member of the Fraternitas Saturni (aka The Brotherhood of Saturn), an occult group founded during a row with no less than famed magickal prophet man Aleister Crowley himself. That came in the mid to late 1920s after Nosferatu had already been unleashed, and Grau had successfully managed to steep the film both visually and thematically in all manner of occult symbols. Indeed Grau’s production company for the film, called Prana Film after the Sanskrit word for “lifeforce,” only ever produced Nosferatu. That would be its single film credit.

It is a little surprising when you watch Nosferatu now, expecting strictly the stark artifice of Robert Wiene’s 1920 expressionistic horror The Cabinet of Dr. Caligari, how much “lifeforce” does infect the film—how much Murnau shot not in sound-stages but in nature, among trees and live animals (indeed one sequence involving a hyena hunting packs of wild horses is especially memorable). The Harker character of Hutter (played with cartoonish relish by Gustav von Wangenheim, although all I can ever see is Eddie Izzard’s hysterical impersonation from Shadow of the Vampire in his place) and the Mina character of Ellen (Greta Schröder) are both strongly aligned visually with Nature—he stumbles through all sort of beautiful pastoral landscapes and we see her protecting flowers and kittens with purse-mouthed aplomb alike.

It’s the unnatural Orlok, the absolute embodiment of the German concept of “Unheimlich” or “the Uncanny,” whose presence corrupts the landscape, bringing with it not just a flood of rats and coffins that the German audiences of the early 1920s would recognize only too intimately, but also Caligari’s staginess, which swallows up the story as the vampire’s reach spreads. At film’s midpoint the famous sequence on the ship, with the ghoul in his dirt-box beneath deck devouring the crew and making his way up top—where he then skitters around phantom-like, a canted angle in human form against a blinding white backdrop of sky—slashes the throat of its erstwhile authenticity. Subsequently, as the emptied-out boat floats ghost-like into the town’s horrified port and the politicians scatter, the nightmare truly begins and the dream-logic unfurls—it’s hard here not to also picture of the similarly famous shot in Murnau’s 1926 adaptation of Faust, with the Devil’s wings blotting out the entire sky, as Nosferatu stakes his claim straight in the breast of the motherland.

And yes, one hundred years on, that deathbird’s shadow remains. While the film’s been accused of wallowing in antisemitic stereotypes, fears of the Other invading and sickening the purity of the bucolic home, one also gets the sense in some ways that the gay Murnau loved and identified with his monster, as would director James Whale a decade later with his Frankenstein films. Much is made of the question, “What sort of vampire do you prefer,” the “romantic” version like Lugosi and Christopher Lee, or the inhuman-seeming rat-toothed Kinskis and Schrecks, like we’re talking about fast or slow moving zombies. But I think that simplifies and in some ways outright ignores the pathos that Murnau and Herzog grant their creatures; the inescapability of their natures, and the manner in which their accursed embraces will become their inevitable downfall. It is sad, when the Sun comes.

Whatever the case the fact is that Nosferatu has lasted, and a century on its power is to my eye undiminished. It’s a shame that The Witch and The Lighthouse director Robert Eggers wasn’t able to get his planned remake off the ground in time for this centennial, but it’s not like the infection is going anywhere—indeed this tale of plague and menace and unnatural love terrifying the masses only seems more relevant than ever. On the night of March 4th 1922, when the decked-out masses headed to the Berlin Zoological Gardens for the film’s premiere and costume-ball (dubbed “The Party of Nosferatu”), do you think they knew a century later the grave they’d cracked open would still have its fangs in their great-great-grandchildren’s throats? That the silent black-and-white ghosts flickering on that screen would seep into the permanent cultural unconscious? And do they think of it now, from where they lay, of the beautiful music it still makes…


← 'After Yang' is a Complex Story of Humanity in a Simple Tale of a Busted Bot | Eileen Gu Is a Teenager, Not Your Geopolitical Pawn →