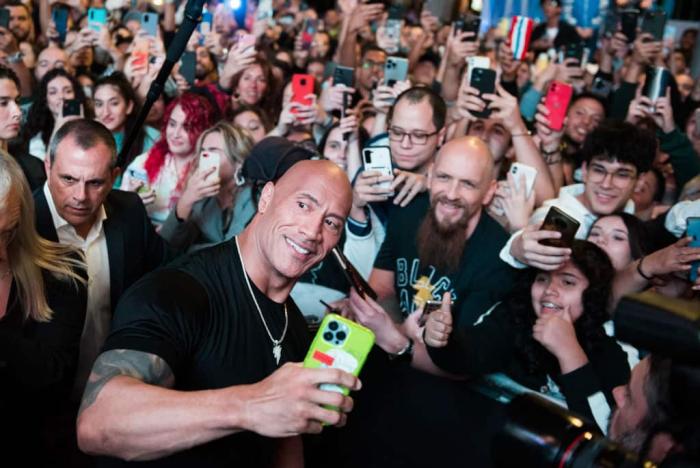 Dwayne Johnson would really like everybody to know that Black Adam did not flop, thank you very much. After Variety wrote a piece detailing the DC film’s disappointing box office grosses, Johnson took to Twitter (with a little help from Deadline) to refute such scurrilous claims.

Waited to confirm with financiers before I shared this excellent #BlackAdam news - our film will PROFIT between $52M-$72M.
Fact.
At almost $400M worldwide we are building our new franchise step by step (first Captain America did $370M) for the DC future.https://t.co/GBIgsbtnkq

In truth, he says, Black Adam ‘will PROFIT between $52M-$72M. Fact.’ He says that puts the movie ahead of the $370 million that the first Captain America grossed, and that ‘we are building our new franchise step by step […] for the DC future.’ Putting aside the fact that Captain America is an 11-year-old film that starred a then-little known actor in its title role, it’s a curious move for one of the biggest stars on the planet to get into this sort of public semantics. If your movie, which reportedly cost about $200 million, needs to prove that it’s actually a hit with a minor step into the black, is it really a success story? To put it in blunter terms, Black Adam made less money at the box office this year than the third Fantastic Beasts movie.

This public cry of technicalities and denials felt all the more desperate after Johnson released another statement to let all the Black Adam fans know that there were no immediate plans to further develop the character under the DC Universe’s new management, co-headed by James Gunn. The statement itself is pretty dry, clearly co-ordinated with Johnson’s team and Warner Bros. Discovery, but in line with Johnson’s hands-on approach to his own mega-stardom. He even gets in a plug for his tequila brand because every moment is an opportunity for the hustle.


It seems like a weird shift for a bona fide superstar like Dwayne Johnson, one of the highest-grossing actors in recent years and a rare figure of universal fandom, to make these kinds of moves. Running to Twitter to prove you’re not a flop is not typically becoming of someone with so little to prove. Yet Black Adam was Johnson’s pet project, and it was sold to the nines as the paradigm shift for the entire DC cinematic universe. To keep that narrative going, Johnson must sell the hell out of a slump, reposition it as an act of three-dimensional chess. It’s probably a greater necessity now that Gunn is taking over DC movies and apparently cleaning house with rigor. So Johnson’s enthusiasm makes sense, but it’s also another symbol of his drive. This is a man who cannot and will not lose.

Johnson is a brand spokesman as much as he’s an actor. Actually, he’s probably more the former than the latter. It’s a career pivot that has also redefined Ryan Reynolds’ star image in recent years, seeing the Red Notice co-stars lean on their well-defined public personas more than their cinematic craft. That aforementioned Netflix film (remember that one?) is the ideal example of this. Neither is stretching their muscles in terms of range because the point of that project is to strengthen their stature in the public eye while shilling their various products. It must have worked on some level since, according to the streaming service, a hell of a lot of people watched Red Notice. Yet its cultural footprint is non-existent. It doesn’t have a devoted fandom tweeting at Netflix for a sequel. It just happened, then everyone moved on, including Johnson and Reynolds. There’s always more content to be made, more places to plug oneself as the ultimate product. Are these films designed to be forgettable, to be as disposable as a tequila bottle?

The Johnson type is obvious: self-aware but always at the top of the pile; an ’80s hero throwback with 21st century meta wisecracking; family friendly but up for bro action; and always wearing that same shirt. Moreover, he’s a figure of endless amiability. He wants you to like him, to root for him, to unite around the welcoming might of The Rock. No matter what, he’s front and center, even when playing a lesser-known DC villain (hence why Black Adam has to go up against Superman now, and not his comics nemesis.) It’s a strategy that’s worked wonders. He’s one of the rare actors able to bring consistent box office successes through his name alone. He’s so popular that he pretended to seriously consider a Presidential run for years because apparently being liked is a greater political force than having any policies. Mercifully, he’s finally killed that self-aggrandizing game of will-he-won’t-he, but the fact that he was able to milk it for so long is testament to the impenetrability of that image he’s crafted. It’s one of such endless victory that he could totally ride it to the White House if he wanted, right?

The hunger to win means that Johnson can’t or won’t slow down. He recently tweeted about his next project, a Christmas adventure film for Amazon named Red One, which will also star Chris Evans and an unexpectedly buff J.K. Simmons. He describes the project as ‘our Christmas franchise film.’ It’s not even finished shooting and Johnson has his eyes on the future, on a potential multi-pronged IP that will last well beyond one theatrical run. There’s always something to move onto, something bigger to create and an ambition to nurture. Never mind whether or not audiences even care about the thing yet. They’ll maybe care about the next one.

Ladies, gents & children of all ages.. the coolest, strongest & kindest Santa Claus ever🎅🏻
Academy Award winner, J.K. Simmons got in incredible shape for our Christmas franchise film
RED ONE 🛷🎄
We’re having FUN and so will you!@SevenBucksProd@AmazonStudios#NorthSwole#RedOne pic.twitter.com/jkGdzwD86G

Hollywood is not a place where anyone stays on top for long. There’s always a younger, cheaper, fad-ready model around the corner. Even the mightiest figures have slumps. Johnson is hardly in a dip with his career. He’s still huge, with irons in a lot of fires. His ferocious drive doesn’t allow for such a decline to have the time to fester. There aren’t many actors working today who are as laser-focused in this manner. For me, the fascinating aspect will emerge when Johnson finds he cannot scale any higher. What happens when audience fatigue hits, as it always does with even the most beloved ideas and figures? What if his Christmas franchise stalls out of the gate, or he never returns to DC? Will he be impacted by decreased cinema attendance numbers and make a shift to smaller, more artistic projects? I wouldn’t write off any new direction. This is a man who can’t and won’t lose.