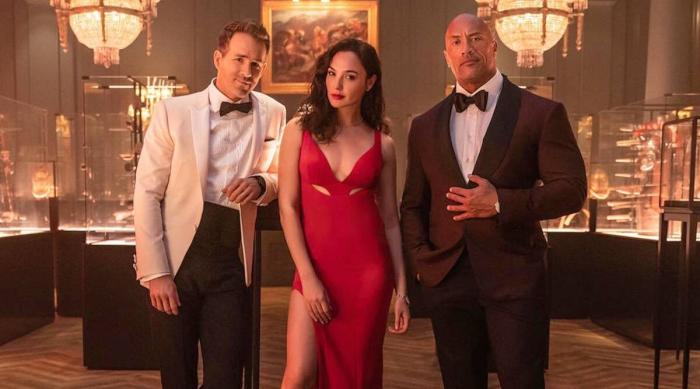 I understand and appreciate how important the theatrical experience can be, but I also ain’t mad that Netflix has gotten into the blockbuster movie game. If they want to spend $160-200 million for a big, action-comedy-heist featuring three of the biggest stars on the planet that we can watch from the safety of our living rooms during a pandemic, I say: Bless. Thank you. I could take my family to see it in the theater and risk exposure to COVID, or I can spend the same amount of money for six months of my Netflix subscription and watch a big, original action movie on a nice couch that doesn’t smell like a dead fart that’s been lingering for a decade.

Red Notice comes from our friend Rawson Marshall Thurber (Dodgeball, Central Intelligence), who reteams with Dwayne Johnson for the third time. Ryan Reynolds plays a master criminal who appears to be teaming up with FBI’s top profiler (Johnson) to take down another master criminal (Gal Gadot). There’s a lot of explosions, wisecracks, and a helluva high-kick from Gal Gadot.

It looks fun, and we could seriously use some of that right now.

Life doesn't always imitate art, but I'd wear a tux and do karate with @TheRock and @GalGadot everyday if I could. #RedNotice, coming November 12 to @netflix. pic.twitter.com/VHxJAvMqu8


← Morning Briefing: The Legacy of Donald Trump and Twenty Years of Minority Rule Continue to Ruin Us | Samantha Bee Wants To Host 'Jeopardy' And Has A Message For Texas Republicans →