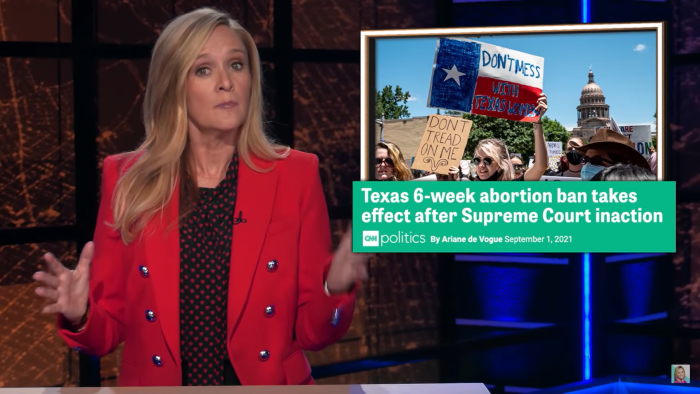 It’s been two months since the last new episode of Full Frontal With Samantha Bee. A lot has happened since then. For instance, I switched from medium to large shirts after two years of living in denial. So yeah, a lot to catch up on. On the main show, Bee tackled the United States taking responsibility for our time in Afghanistan and addressed school dress codes. On YouTube, she took things in a different direction. Her aim there was focused on Texas and Jeopardy!

We’ll start with the lighter of the two. While Bee was on hiatus, Jeopardy saw a bit of a hosting debacle unfold. Mike Richards, an Executive Producer on the show, basically gave himself the gig, was revealed to be a s***head, and then got fired after public outrage. We still don’t know who the new main host will be. Samantha Bee has a suggestion!

At this point, most people would be better than Richards. Even if it is a joke.

The other subject Bee briefly touched on via YouTube is Texas’s recent ban on abortions taking place after pregnancy has reached six weeks. It is an archaic ban with the intended purpose of banning abortions outright. At the time of Bee’s recording, the Supreme Court had yet to weigh in. Last night, they did and things got a whole hell of a lot worse. Thanks to Texas and a Supreme Court packed with Conservative Judges, Roe v Wade has essentially been overturned.

Sometimes, it’s difficult to find the words to express how one is feeling in situations like this. When Donald Trump was allowed three Supreme Court appointments, a lot of people said this was going to happen. However, “I told you so” doesn’t feel like an appropriate response right now. I guess that none of those people are happy right now. Instead, I think we can turn to Samantha Bee who sums things up pretty concisely.

← Trailer: Netflix's 'Red Notice' Starring Ryan Reynolds, Dwayne Johnson, and Gal Gadot | Who Had the Brilliant Idea of Opening School Board Meetings Up to the Public? →