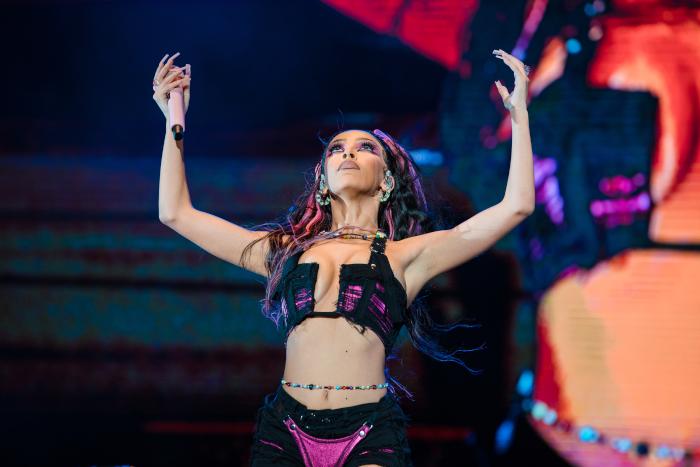 Doja Cat And South America Got Into A Twitter Fight Over a Cancelled Concert. Everybody Lost.

One of the reasons that give me hope about culture in general, and pop music in particular, is that someone like Doja Cat has somehow managed to become a hitmaker. You know, the person who kickstarted her career with… this beauty.

Quick recap if you haven’t heard of her: Doja Cat is one of the biggest names in R&B/Pop/Hip Hop right now. She has been leading the charge of this whole “Vibes” music sound that’s pretty much becoming the sound of the 2020s as embodied by SZA and Kali Uchis and pioneered by FKA Twigs. It’s a highly melodic, laid-back blend of R&B, trap-leaning hip-hop and Californian sounds that goes down on you like, well, something laced with pot or edibles. Doja adds her own sense of humor and absurdity.

Riding high on two back-to-back breakout albums and finally being able to tour (both supporting The Weeknd’s 2022 stadium tour and as a headliner), she kicked off the year performing at the main late-summer festivals in South America.

I know I should be skeptical of bougie things like corporate music festivals, but let’s face it, ever since international festivals like Lollapalooza or Primavera started dropping by the continent, it’s been mostly great. I mean, it’s bougie and prohibitively expensive for most people here, but we have always been an afterthought in most major artists’ tour scheduling. Nowadays, most major world tours by Anglo artists will schedule at least one date per South American country (other than Brazil and Argentina), but that was very much not the case just 20 or 15 years ago. When artists like the Rolling Stones, Michael Jackson, or U2 stopped by with their 90s tours, it was a national event. Now, you can actually catch up with artists that are rising or at their peak in your own country, instead of waiting for the chance of a reunion tour. And yes, the dictatorships of the ’70s and ’80s were a major hindrance. Case in point, it’s a well-known fact that Pinochet’s wife had a hand in preventing Queen from doing a concert in Chile; I don’t need to explain why a fascists dictatorship wouldn’t be into Freddy Mercury.

In that context, and after the gut-punch of two years of the pandemic actually canceling everything, I wouldn’t be surprised if South American popheads are feeling anxious. Our national economies aren’t in good shape, and bringing music festivals to the region is a considerable business risk. South American fans wouldn’t be exaggerating if they feel this little golden age of music concerts threatened by the post-pandemic world.

But so far, the summer festivals have been successful. No one was responsible with the mask protocols, so there is a new spike of COVID cases, but South Americans have this thing where most of us, you know, believe in vaccines. Unfortunately for Paraguay, probably the most isolated country in the continent, their top-tier festival (Asunciónico) had to be canceled after torrential rain fell on its second day, the 22nd of March/a>. This is something you’d think the organizer would plan for in a subtropical city with 80 days of rain a year and about 120 mm of rainfall on March. I mean, I don’t expect them to predict a weather front, just to have contingency plans.

Doja Cat’s concert was among those canceled. Being used to downpours, several Paraguayan fans waited outside her hotel in order to meet her, but she never showed up. People lost their goddamn minds. On a Continental scale.

Paraguayan fans felt disrespected by the alleged snub, which let’s face it, probably wasn’t going to happen. For context, that very same day, lightning from the same storm front struck Miley Cyrus’ plane as she arrived in Asunción. Some sources claim that Doja decided to throw a concert in a small bar with further rumors that she acted like a total diva, but these are all unconfirmed hearsay. Still, all of this escalated into South American Twitter unleashing their scorn over Doja with the indispensable #DojaCatIsOverParty in ways that will surely not stereotype us with the fiery Latino trope.

But Doja, being a twenty-something person on the Internet couldn’t help herself by making things worse, using her personal account to clap back at Paraguayan fans, going on the defensive and complaining that no one had been waiting for her as she left the hotel in Asunción. Famous people can’t let go of engaging with social media shitstorms. This, of course, led to further dragging on social media, driving Doja into “fuck ‘em kids” mode, announcing she wouldn’t be taking pictures with fans outside hotels anymore, and making the usual claims of quitting social media. This didn’t last long, as she shouted out her Brazilian audience in a concert held two days later, apologizing for not giving a pitch-perfect performance, which yes, was a pointed act of pettiness against her Paraguayan fans for acting, well, kinda shitty. However, that only poured gasoline on the wound of mixed metaphors: The one argument Paraguayan fans did have for them is that it would’ve been nice if Doja had made a video saying how sorry she was about the canceled concert like Miley Cyrus did. The expectations were also higher considering other major artists did hang out with fans in Asunción, including the Foo Fighters and Machine Gun Kelly.

A stupid scandal requires every party doing a series of small, stupid, and inconsiderate things. The end result was a Twitter shouting match between US fans of Doja and South American Twitter, two groups of people that do not know what the word chill means. Latin America is one big dysfunctional family; we can talk shit about each other all the time, but if a gringo disrespects one of our own, Latin American Unity powers combine because family is family.

Most times, it’s absolutely warranted, but this time we might’ve exaggerated. Doja’s US fans made several good points: She didn’t owe them a get-together, she doesn’t owe them her time and personal space. Plus, they claimed that some in South American Twitter made racist comments about her. I haven’t found any myself, but yeah … that tracks.

However, when parasocial communities clash on Social Media, it brings out the worst in each other. Predictably, gringo fans tweeted their own racist clapbacks.

The spiral of pricksmanship went on until the boomers decided to chime in. On the 25th, the official account of MERCOSUR, South America’s supranational trading organization and EU-wannabe, decided they had to keep it real with the kidz, and posted this: MercosurDojaCat.webp

Translation: Doja Cat dissing a #Mercosur country (red flags). They deleted it after a while. To be fair, Mercosur is about as relevant on a global scale as Doja Cat. This isn’t a dig at her, because she’s not supposed to be a international economic partnership representing 600 million people.

In the end, everybody lost, and Taylor Hawkins heartbraking death during this same season put everything into perspective. There’s no doubt Doja Cat is mostly in the right here, but I also understand where Paraguayans are coming from.

Paraguay is the underdog in an entire continent of underdogs. Their history has been tragic as hell, even by Latin American standards, and they have to contend with being a landlocked (though connected via rivers) sparsely populated country far from every major population center in South America. A regional meme is forgetting that Paraguay exists, which is a heightened version of how we feel in the Global South. The dynamics of exploitation are bad enough, but we also have a mountain to climb to gain cultural relevance. South American fans feel deeply when major global stars actually acknowledge us, even now when many of the biggest names in music are South American themselves. We want to feel recognized, having The Weeknd tell us that they loved the mountains in Santiago, Drake giving a shout-out to the food in Johannesburg, Ed Sheeran taking selfies in Bogotá, and Miley apologizing to Asunción from a bathtub, even though there was nothing she could do. That’s something you wouldn’t understand if you are from any Alpha-City, with the exception of Rio or Sao Paulo. You are already part of a broader cultural scene because you are a hub; we are used to being a final destination.

Then there’s the culture of Latin hospitality, as embodied in that one Spanish expression everybody knows. Just the perception of rejected hospitality is a major faux-pas here. Probably we need to work on that, but in the meantime, just make a Tik-Tok that is just for us in (INSERT CITY). Because unlike audiences in major cities, Latin fans are loyal as hell. Just ask any band that was huge in the 80s and played a reunion tour here.