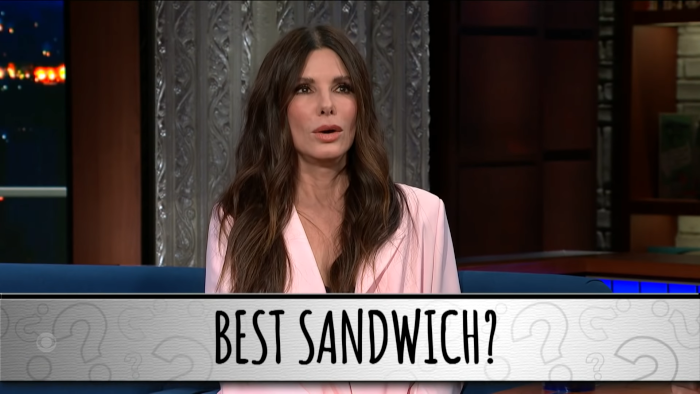 Sandra Bullock Is An Absolute Delight Taking The Colbert Questionert

Few celebrities can seem genuine during talk shows. It’s not easy to do. They have to answer questions that they’ve likely answered a hundred times already while seeming interested and charming. It is a dance that takes a lot of skill and practice. Then, some seem capable of doing it with ease and grace. One of those people is Sandra Bullock.

Bullock appeared on the latest episode of Colbert to discuss her new movie The Lost City. While there, she dared stare at the Colbert Questionert (OK, that was a little forced). In this bit, Colbert asks his guests a series of questions ranging from, “What’s the best sandwich?” to “What do you think happens after we die?” The fun of this bit is that it pokes fun at how some of these shows tend to go. Bullock rises to the challenge regardless, taking the whole thing fairly seriously.

I don’t mean that she’s being too selective with her answers; she’s not guarding herself. She’s giving each question a thoughtful answer, even when they’re silly. With that mentality, Bullock manages to show off every one of the skills that have made her the superstar she is today.

Come for her endless charm. Stay for her pretty spot-on Brad Pitt impersonation!’

← Ruth Langmore Goes Full Atomic Redneck in the Trailer for the Final Episodes of 'Ozark' | Doja Cat And South America Got Into A Twitter Fight Over a Cancelled Concert. Everybody Lost →