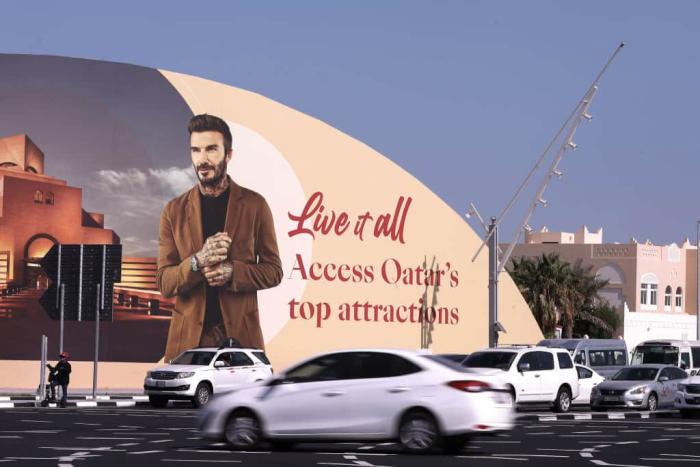 After weeks of silence and evading questions from the media, David Beckham has finally offered a statement regarding his multimillion-pound World Cup deal with Qatar.

His spokesperson sent a response to comedian Joe Lycett, who had issued Beckham an ultimatum before the World Cup opening: End his relationship with the World Cup hosts before the first match, or Lycett would live-stream himself dropping £10,000 into a wood-chipper. He did so, but then revealed that the money was fake and he’d donated the cash to LGBTQ+ charities before making the initial video.


In a special edition of his series, Joe Lycett’s Got Your Back, a comedy show with a serious focus on calling out consumer troubles with major businesses, Lycett read out the statement in full:

‘David has been involved in a number of World Cups and other major international tournaments both as a player and an ambassador and he’s always believed that sport has the power to be a force for good in the world.

Football, the most popular sport globally, has a genuine ability to bring people together and make a real contribution to communities.

We understand that there are different and strongly held views about engagement in the Middle East but see it as positive that debate about the key issues has been stimulated directly by the first World Cup being held in the region.

We hope that these conversations will lead to greater understanding and empathy towards all people and that progress will be achieved.’

Oh golly gosh, what a hero. He took the reported $10 million for the good of us lowly little people. Truly the work of a selfless being and not a money-hungry narcissist who doesn’t give a crap about human rights.

Lycett, who had been informed by Channel 4’s legal team not to give his opinion on the statement, offered a response that delved more into the way that celebrities and corporations purport to be LGBTQ+ allies when it’s convenient or profitable to do so, only to drop it when there’s money to be made elsewhere. As he said, ‘being an ally is for life, not just for Christmas.’ Lycett also noted that both Mcdonald’s and Budweiser had not responded to their questions over their involvement in Qatar 2022.

Beckham was a good way to focus on this issue, in my opinion. He’s generally well-liked, popular even among non-football fans, and definitely didn’t need £10 million from a country where queer people’s lives are at stake every day. He had nothing to gain from aligning himself with despots, aside from lining his already full wallet. He was an easy face to point to and note the wider problem, the ways that cishet people think that supporting queer liberation and equality is a nice PR boost but only when their bottom line isn’t threatened. I personally struggle to see how football of all things could lead to seismic progressive change in a country with such a dismal human rights record. All it does is whitewash their crimes and put a capitalism-friendly face to it all. Qatar will get very rich from this World Cup, while its LGBTQ+ citizens continue to suffer and the countless workers who were injured or killed building those glossy stadiums will be forgotten about.

David Beckham is a spineless rat who cares only about himself, but he’s not the only one at fault here, as Lycett noted. If only the money could talk back to them.