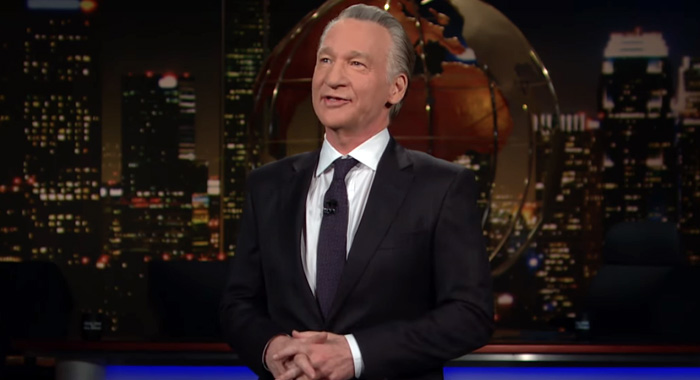 Last week, I covered a privileged mayo creature in human skin defending Chris Matthews — (It was Meghan McCain. I know you’re very shocked.) — so if it ain’t broke, why fix it?

This time around, Bill Maher is the latest media personality to defend Matthews after he abandoned his MSNBC post in the middle of a broadcast. Did he resign or get the boot? Nobody knows, but it followed a bang-bang succession of incredibly stupid shit on the air like comparing Bernie Sanders’ campaign to the invasion of France, basically revealing he thinks all black guys look alike, and a heated exchange with Elizabeth Warren about believing Michael Bloomberg’s accusers. And then there were the renewed sexual harassment allegations. It was time to put ol’ Chris out to pasture.

Unless, of course, you ask Maher who thinks it’s just awesome that Matthews constantly talks over guests like Warren as she tries to explain why we should probably believe women. Via Deadline:

“This sounds like every question Chris has asked,” Maher said. “And I hated being interviewed by Chris, because he would ask you a question, you’d start to answer, and then he’d keep talking. Because he had so many thoughts. I’d like some more people on TV with thoughts. A lot of people couldn’t interrupt themselves because they don’t have a thought without a producer talking in their ear.”

Don’t you cancel culture rubes get it? Chris Matthews is bursting with non-stop manly thoughts, as deep, smart intellectual MEN like Maher and his ol’ pal Chris are wont to do, so who are we to deny him from shouting those thoughts into his guests’ faces making the entire conversation practically pointless? Also, does that remind you of anyone? (Even when I’m not writing about Meghan McCain, I’m still writing about Meghan McCain. Never forget.)

However, Maher’s most egregious comments came when he decided to downplay Matthews’ alleged penchant for perving all over women in the workplace. Notably, Maher stuck to only one of the accusations, and not the several other accusations that NBC has allegedly overlooked. From The Daily Beast:

According to Maher, Matthews “said some things that are kind of creepy to women,” continuing, “You know, I just, guys are married for a million years, they want to flirt for two seconds. He said to somebody, Laura Bassett, four years ago, she’s in makeup, he said, ‘Why haven’t I fallen in love with you yet?’ Yes, it is creepy. She said, ‘I was afraid to name him at the time out of fear of retaliation. I’m not afraid anymore.’ Thank you, Rosa Parks. I mean, Jesus fucking Christ! I guess my question is: Do you wonder how Democrats lose?”

One of his roundtable guests, the anti-#MeToo writer Caitlin Flanagan of The Atlantic, proceeded to further mock Bassett, saying of her, “How fragile can one woman be?” and insinuating that she was only booked on Matthews’ show because “she probably looked good on camera.”

I haven’t watched Real Time in forever, but it’s nice to know that Maher is still the king of smarmy quips that sound like something the rapist on this week’s Mad Men would say. It’s important to have a niche. On that note, I love how being married is a totally acceptable excuse to make your female co-workers uncomfortable, because why disrespect one woman when you can kill two birds with one stone? Maybe I’m just a repressed schoolmarm, but it seems like Maher’s main argument is that we should never ever put any restrictions on men because they’re magnificent thought-leaders whose rightful reward is perving on anything and everything in sight.

Is Maher gearing up to start a YouTube series about making your bed or how the government should be recklessly throwing sex workers onto angry live grenades who have been unfairly denied access to women’s sex parts thanks to feminism? Because I feel like we’re rapidly approaching that territory. What else is Maher trying to say here besides endorsing Old Boys Club misogyny and acting like he’s goddamn Plato by doing it?

At any rate, try not to let this depress you even further because our only options for president in the year 2020 are elderly white men. Whee!

← 'Last Week Tonight': America's Obsession With Cowboys Is Going To Ruin Us All | With a 'Beauty and the Beast' Prequel in the Works, Disney+ Has an Original Programming Problem →