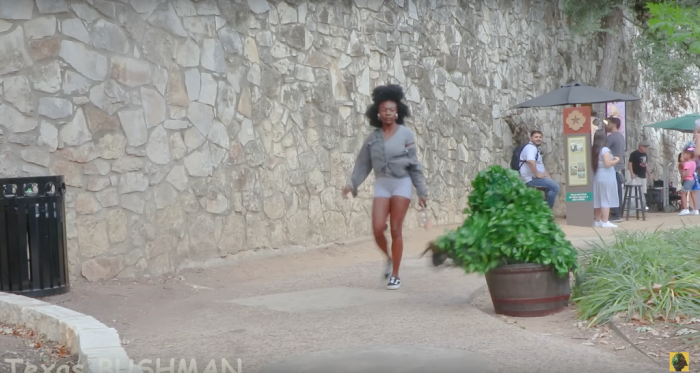 Let's Be Honest: This is Probably the Most Correct Way to React to Any Prank Against the Public

So there’s a bloke on TikTok called texasbushman, and his thing is disguising himself as a bush, usually somewhere on a public thoroughfare, and scaring people as they walk past what they think is…well, just a bush.


The funny thing about texasbushman is that he has over 2 million followers. At what point is everyone in Texas (I’m assuming that’s where most of these take place, I have no idea) just gonna be looking suspiciously at every bit of roadside foliage? An entire state, just reduced to a gibbering, paranoid mess, pre-emptively jumping at shrubbery so as to not get caught unawares.

Speaking of not getting caught out, though.

Texasbushman’s pranks are relatively harmless in the grand scheme of things. Certainly, there’s a brand of YouTuber—none of whom we’ll dignify by naming—that have made a brand out of incredibly toxic, harmful, in some cases lawsuit-worthy ‘pranks’ that stretch the definition of the word to breaking point. Compared to them, texasbushman is a benign presence. Nevertheless, you can’t be surprised when the reaction to even his brand of public prank is…


Here’s a YouTube version if you don’t fancy the TikToks (relevant bit at 10:34):


Somebody buy that woman a drink. What a champion.