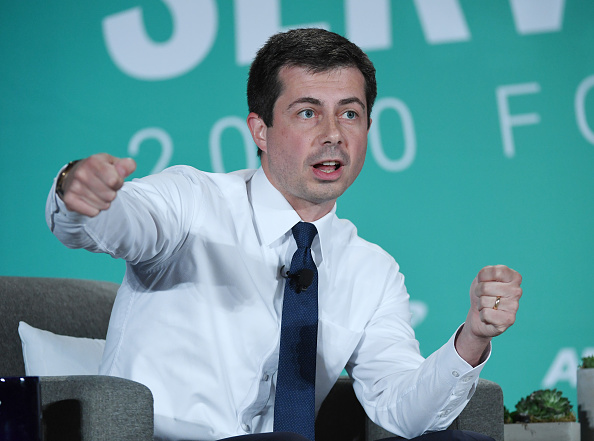 Pete Buttigieg is the TikTok of Presidential Candidates

Apparently, I am not as knee-deep in social media as I had previously believed, because when Colin Jost mocked Pete Buttigieg’s High Hopes dance on SNL’s “Weekend Update” this Saturday, it was the first I’d seen of it.

if you do this dance you should be banned from voting for the rest of your life what the fuck is wrong with youpic.twitter.com/ilPKrdHhgY

Oh my God, I love it so much! I spent at least an hour on Sunday watching “High Hopes” videos, trying to guess in advance if it would be an earnest one or a mocking one. Like, here’s an earnest one, which reminds me of the figurative “Oh, honey” head pats TK gives me every time I naively decide to believe in the best of people:

All over America, young people are learning a new dance. It’s not “the dab” or “the whip and then shanaenae”, it’s the mayor Pete Buttigeg dance, a hip modern routine set to panic! at the disco smash “high hopes” pic.twitter.com/Nzzkwvy9oV

Seeing that one primed me for the rest, because I knew there wouldn’t be a twist in all of them, like there is in this one:

I feel this sort of wave of relief when a “High Hopes” dance is revealed to be a troll job. This one, I think, is my favorite, because everything about it shouts, “REAL! EARNEST!” until the final second of the video, which reveals the sly subversion.

Finally mastered the Mayor Pete dance! Check it out! pic.twitter.com/8lgleOApDk

But then you’re like, “Look at these guys! This is gonna be a terrific parody!” And then it turns out to be 100 percent genuine:

doing the sick #highhopes dance for mayor pete with my pal pic.twitter.com/mafMDPxLOx

As for this one? I don’t know! I genuinely do not know! Genuine? Or mockery?

This one reveals itself early on. In fact, a lot of the “High Hopes” parody videos are engineered by Bernie folks, because this is the way the youths duke it out:

Forcing my friends to do the cursed Pete Buttigieg High Hopes dance after class pic.twitter.com/5irL06BsQx

Meanwhile, I don’t know how many times I’ve seen the most popular TikTok video meme applied to the “High Hopes” dance, but it makes me laugh every time.

me when I’m forced to campaign for pete buttigieg and do the high hopes dance pic.twitter.com/PpfcRH2PgX

My fascination with the “High Hopes” video is not necessarily a knock against Buttigieg, who I understand refuses to do the dance. I’m not a fan of Buttigieg — or at least, the iteration of the centrist Buttigieg that has evolved over the last few months. When the ultra-lefties on our site call Elizabeth Warren a neoliberal, the progressives get our hackles up, but when they call Mayor Pete a neoliberal and suggest he’s a CIA plant, we all shake our heads in agreement. Yeah, maybe? ¯\_(ツ)_/¯

What I do find so fascinating is how this dance cements Buttigieg as the 2020’s TikTok candidate. For those who don’t spend a lot of time on TikTok, it is fascinatingly uncool. I don’t mean that in a negative way. It is an unpolished version of Instagram where people genuinely feel free to be themselves. It’s sort of the Napoleon Dynamite Dance of social media.

That is a huge part of its appeal, and what it has done tremendously well is capture both young people and their parents. It’s not where you go to show how above-it-all you are. It’s where you go to revel in how much you love your parents. Here, for instance, is Caroline Bullock with her father, Presidential candidate Steve Bullock (who is still running, by the way):

Well Steve Bullock has now appeared in a TikTok

It’s silly and dumb and earnest, and kind of great, but also so aware of its own silliness that it’s immune to mockery, like this guy:

All over America, young people are learning a new dance. It’s not “the dab” or “the whip and then shanaenae”, it’s the mayor Pete Buttigeg dance, a hip modern routine set to panic! at the disco smash “high hopes” pic.twitter.com/Nzzkwvy9oV

I’m sorry, but if you make fun of that guy with a mean spirit, you’re an asshole. That dude is just living his truth. I don’t agree with his truth, but I ain’t mad at it.

Meanwhile, check out this headline from the NYTimes over the weekend:

That’s kind of how I see the “High Hopes” dance: Deeply corny, but gloriously free. In terms of Buttigieg’s supporters, it’s free of pretense, but it’s also draped in a kind of obliviousness, like confronting Trump’s Cobra Kai with Buttigieg’s Napoleon Dynamite dance. You’re gonna get your clock cleaned. TikTok, like Mayor Pete, is not interested in advancing systemic change; it’s interested in unifying folks with corny dances and fucking mint. There’s absolutely nothing wrong with that if you’re running for mayor of a small town. But if you’re running for President, you have to believe in something beyond this sort of vague sense of unity. Otherwise, you’re not a candidate; you’re a meme owned by a Chinese company.