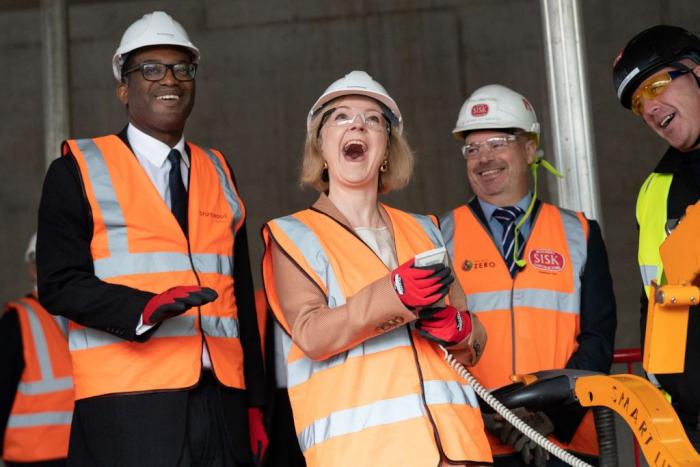 Just All the Best Liz Truss Memes, Because It's Still Hilarious

Going forward, I’m sure ‘Where were you when Liz Truss resigned?’ is going to be a fun question at social gatherings around the UK. We’re gonna need something to entertain ourselves with as the country implodes further and comes apart at the seams completely amidst rising global turmoil for god’s sake! I’m quite pleased with my answer to the prompt, as I know I’ll never be able to forget it: I was at a wedding, and it cracked me the hell up.

Last Thursday one of my good mates was set to be married. A joyous occasion for sure, though one with a proviso attached to it: It was to be held in the middle of nowhere. A ‘beautiful, secluded location’ somewhere near the picturesque Lake District. It had no problem living up to the description, especially when it came to the secluded part, as it was nigh-on impossible to get any phone signal or Wi-Fi outside of the place you were sleeping, which was separate and distant from the venue in which the actual wedding ceremony, dinner, and celebration was to take place—so for pretty much the whole of Thursday 20th October (a day that is now written in history books for hilarious reasons), we were all without any access to news of what might be happening in the outside world. Occasionally, though, some signal would get through to someone. They’d wander into a magic spot that seemed to forever shift location, and a brave messenger would burst through the defences, bringing word from the outside world.

This is how the hundred or so people at this wedding in the middle of an impossibly verdant nowhere found out who our shortest-ever serving Prime Minister would be. And it was hilarious. Starting from that solitary receiver, the message pinged its way across the venue, lighting up each person’s face in turn like a beacon of Gondor. ‘Truss is gone!’, ‘Truss has resigned!’, Truss is toast’! went the cries, as every recipient went through the same wave of reactions in rapid succession: Disbelief, joyous laughter, and then manic, fatalistic laughter at the knowledge that whoever came after would be just as bad if not worse anyway. I had a great time in the chaos, as I was the one who got to break the news to the bride and groom, the latter of whom then even worked it into his speech. So congrats, Liz Truss, you might’ve been mostly good for enacting a rapid plundering of the public purse, but hey, you added a fun bit of spice to an awesome wedding too! Cheers! To celebrate, here’s the internet taking the p*ss out of it all, because how else do we pass the time on a sinking Titanic?

IM IN TEARS THERES NO WAY CHANNEL 4 DID THIS HAHAHAHAHAHAAHAB #LizTruss pic.twitter.com/6ikuRQWnri

‘Believe’ by Cher was number one in the UK for five days longer than Liz Truss was Prime Minister pic.twitter.com/kPmjjHyyYK

German TV news on what is happening in British politics is amazing. No need to understand German, watch to the end pic.twitter.com/RFPnD1iOFF

Liz Truss is the only PM to not have an episode of #DoctorWho air during their premiership since the show began in 1963.

As an Arab, I have to ask: Is Britain ready for democracy?

thoughts and prayers to the authors of this book. out December 8th! pic.twitter.com/nFUUYpWruj

In light of Liz Truss' resignation, I made a chart to explain UK politics for anyone confused pic.twitter.com/uBweUvQU0o

Liz Truss looking at the Google Images results for “shortest-serving prime minister of all time” pic.twitter.com/awKuJn9Hu5

wagner lasted longer in the x factor than liz truss did as prime minister pic.twitter.com/sxjIOLQARZ

Liz Truss The Titanic
🤝
Defeated by an
iceberg

me on my me when i’m
way to work at work pic.twitter.com/IlWJ8zl108

If you have more than 1,080 hours in a video game, you've played it longer than Liz Truss was Prime Minister of the UK

It is quite amazing that Liz Truss was voted in by 0.3% of the adult population, had the job for 45 days, crashed the pound and now gets £115k every year until she dies.

It has been pointed out to me that I was #PrimeMinister for longer than #LizTruss
🤦🏾‍♂️ pic.twitter.com/KEquvXi3lK

If you started shipping Halbrand/Galadriel after the raft scene in episode 2, you've been a Halatariel shipper for longer than Liz Truss has been Prime Minister of the UK.

On current pace, King Charles could surpass his mother’s record of 15 prime ministers before the end of 2024

cant believe she came, she killed the queen, she crashed the pound, and she left.

she is an Irish operative https://t.co/XZykExl1T5