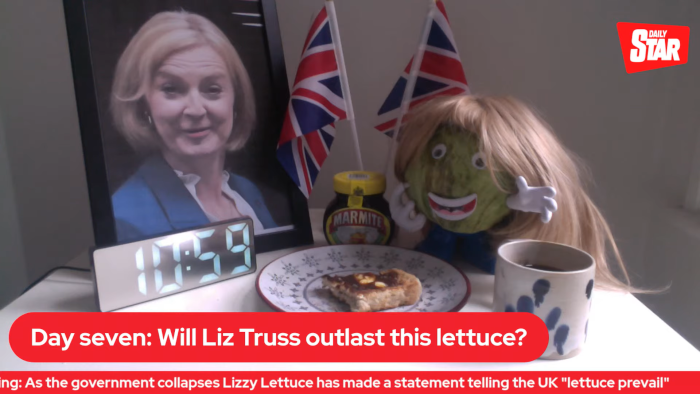 What do a lettuce, the C word, tofu, and crying MPs have in common? They’re all featured characters in the latest meltdown of the Tory government that led to Liz Truss resigning. I know, it feels like we do this every week, but this time, things are somehow even more bananas than usual. Where to even start?

Just a few minutes ago, Truss announced her resignation as Prime Minister, ending a tenure that lasted for less time than it took for the Tories to have the leadership contest to replace Boris Johnson. Yes, this actually happened. So, how did we get here?

Liz Truss spent the shockingly short time she was in charge revealing herself to somehow be even stupider than first thought. She pushed forward a mini-budget designed to deal with the cost-of-living crisis, which has seen inflation bring food prices to their highest in decades. That budget, pushed by then-Chancellor Kwasi Kwarteng, was so disastrous that it briefly caused the British pound to fall to its lowest-ever level against the US dollar. Kwarteng was dismissed from his job 14 October after 38 days, making him the second shortest-serving post-war Chancellor. He was replaced by Jeremy Hunt, the former Health Secretary and the man widely seen as the most destructive force on the NHS in its decades-long history (and yes, we all struggle not to swap out that H with a C.) He then announced a U-turn on most of that budget, including the sliver of half-decent policies that would have been of some help to the poorest in this country.

THEN Suella Braverman, then the Home Secretary, faced pushback for blaming recent anti-oil protests on ‘Guardian-reading, tofu-eating wokerati, dare I say the anti-growth coalition.’ It was a moment so parodic that it made me want to give up meat forever. Braverman then quit her position, but said it was because she ‘sent an official document from my personal email to a trusted parliamentary colleague as part of policy engagement.’ Of course, she still got in some parting shots at Truss, whom she previously aligned herself with for many months during the leadership election. Her time as Home Secretary lasted 43 days.

THEN Labour basically laid a trap for Truss by calling for a vote on fracking, attempting to force the introduction of a draft law to ban the extraction of shale gas in England. Truss, whom I can only assume has a personal vendetta against the environment, is all for fracking. That’s not necessarily a popular policy even among Tories. So, Labour decided to see how things would go with this. Would Tories have a backbone or be forced into staying loyal to a crumbling PM?

Truss’s government wanted this to be a confidence vote to show how totally united they are against the evil tofu lot. It didn’t go well. As many Labour MPs noted, Climate minister Graham Stuart told MPs that the vote wasn’t a confidence motion but there seemed to be serious doubts among the party as to what was going on. Labour MP Chris Bryant claimed he had seen Tory MPs being manhandled into voting chambers to vote for Truss’s stance. Ian Murray MP said Tory whips (the ones who are supposed to keep everyone in line but not like bouncers) were ‘dragging people in’ and that Jacob Rees Mogg, a fascistic pencil that became a real boy, was ‘shouting at colleagues.’

I’ve never seen scenes like it at the entrance to a voting lobby. Tories on open warfare. Jostling and Rees Mogg shouting at his colleagues. Whips screaming at Tories.
They are done and should call a general election.
Two Tory whips dragging people in. Shocking.

Chris Bryant is currently telling @SamCoatesSky on Sky among the “manhandlers” were cabinet ministers Jacob Rees-Mogg and Thérèse Coffey pic.twitter.com/L2QLiTKIla


This is obviously a big deal. The whole point of the voting system in the UK Parliament, which is kind of like sheep pens with nicer furniture, is for MPs to be able to vote without intimidation. Having Walter Softie drag you into a room to do as he says isn’t exactly democracy in action.

Tory MPs THEN told the BBC that chief whip Wendy Morton and deputy chief whip had resigned in protest, but that’s apparently not true. We can see why MPs would be confused given that the deputy chief whip, Craig Whittaker, was allegedly heard saying, ‘I am fucking furious and I don’t give a fuck anymore.’

That wasn’t the only profanity heard throughout the Tory-shambles. Krishnan Guru-Murty, a newsreader and reporter for Channel 4, dropped the ultimate C-bomb in relation to MP Steve Baker. It was amazing.

NOW, many MPs are actively revolting against Truss. Long-time Tory MP Charles Walker, who seemed visibly shaken, was extremely candid to the BBC about how shambolic the entire affair was. He laid part of the blame at the feet of dumb careerists who put their own jobs ahead of the country.

Conservative MP Charles Walker: "It's a shambles and a disgrace… I hope all those people that put Liz Truss in No 10 think it was worth it… because the damage they have done to our party is extraordinary." pic.twitter.com/PxdvZkiWSJ

Seven Tory MPs had called for Truss to resign. Weirdly, Boris Johnson wasn’t one of them. We know he’s hungry to get that job back. I’d rather the entire island sink into the sea. Our options with the Tories are not great.

But Kayleigh, I hear you ask, what about the lettuce? WELL, the Daily Star, one of the lower-grade British tabloids, decided to see how long Truss could hang onto her job. They’re betting that she’ll be gone before this lettuce rots away. They even put up a live-stream for people to check in on the lettuce, which now has a wig and cup of coffee to start a fresh new day. Sometimes, the pettiness of the UK press pays off.

I’m not sure I have the words to describe the sheer madness of British politics this year. This is abject humiliation for the Tories but somehow not as much as they deserve. We’re going to get our third PM in one year, the second we didn’t actually elect. This is disastrous for democracy and our country, which seems set to fall further into right-wing chaos and cruelty. This is all hugely entertaining — who doesn’t love a bit of schadenfreude for the Tories? — but we’re in a devastating period of hardship for the majority of citizens and it’s only going to get worse. This lot won’t help. The very least they deserve is some worldwide embarrassment.