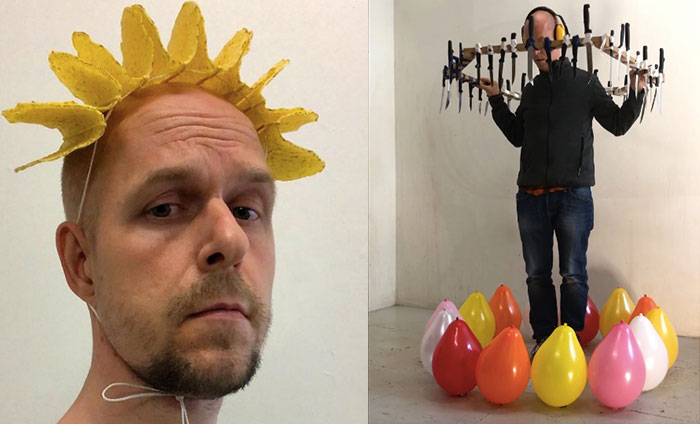 Pajiba Investigates: Why Did This Man Go On An Elaborate Balloon Killing Spree

Balloons are a symbol of celebration, of childish fun, and—yes—sometimes murderous clowns. Even popping them can be fun. But one man has dedicated a substantial chunk of his time to eradicating balloons, an inflated menace he apparently cannot abide. And we’re not talking taking a pin to pop them post-party. This dude has busted out a bunch of knives and contraptions in Saw-like scenarios to annihilate the rubbery bubbles.

My first thought watching this colorful carnage was, “Why though?”

Is this a high-concept music video that forgot to actually put the music on?

Is he just giving a world of nope to the upcoming It: Chapter 2?

Are the fae involved?

Is this a condemnation of internet culture in which videos as inexplicable as this can go viral?

Is there a code in the color of the balloons in each segment? Is this a coded protest against the great sins of the world that could be taken down if we banded together like a frame of knives in a pointed attack to deflate their wickedness?

Or am I overthinking this? Did a balloon murder his family and this is just his ruthless revenge, done not in private, but in public as a warning to all those other balloons who might be tempted to violence?

Well, the man in question is Norwegian artist Jan Hakon Erichsen. And if you want more balloon mayhem, there’s plenty more that didn’t make the cut on his Instagram, where he also smashes hard taco shells with his face.

Yes, balloons are not the only victims of Erichsen’s unique brand of violence. He also headbutts bananas.

He squashes a squash.

And f*ck this clock.

As to the why of it all, it’s part of his Destruction Diaries, which he spoke to Vice about. Yet didn’t exactly answer the burning question of WHY THO?

“I had just finished a longer time-consuming art project and just wanted to make something short and funny for my own amusement. I just took some parts I had lying around my studio and decided to make a contraption to destroy something. I filmed it with my phone and decided to share it with a few friends on Instagram and it has just escalated from there.”

Erichsen did suggest there’s something deeper at play in these scenes of destruction, saying, “If people only see the humor in the videos that is fine by me. Hopefully, some of my more dedicated followers will see that it is more to it than just laughs, but it is by no means necessary to understand my references to enjoy my work.”

Please share your interpretation of this balloon slaughter in the comments.