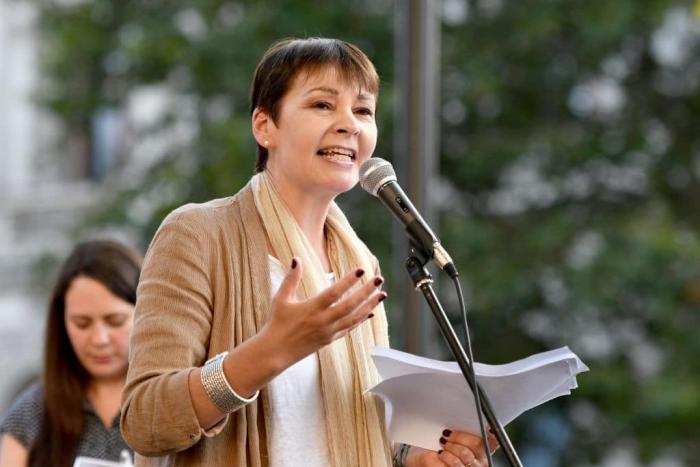 As Britain continues to spiral downwards into the Brexit hellhole, with Boris Johnson stumbling at the front as if it was his intent all along, we have begun to scramble for any solution possible. How do we stop our country from descending into the final levels of madness? Can we put an end to a No-Deal Brexit, and what level of blood sacrifice is required? Well, Green Party MP Caroline Lucas thinks she has a solution. Let the women sort it out.

In a piece for The Guardian, Lucas explains her proposal for an ‘emergency cabinet’ made up exclusively of female MPs across the political spectrum:

Why women? Because I believe women have shown they can bring a different perspective to crises, are able to reach out to those they disagree with and cooperate to find solutions. It was two women, Betty Williams and Mairead Corrigan, who began the Peace People movement during the worst of the Troubles in Northern Ireland; it was two women, Christiana Figueres and Ségolène Royal, who were key to the signing of the Paris climate agreement; intractable problems have found the beginning of resolution thanks to the leadership of women.

So I have reached out to 10 women colleagues from across the political spectrum at Westminster and Holyrood - Conservatives, Liberal Democrats, Labour, the SNP, Plaid Cymru, the Independent Group for Change and independent - asking that we join together to stop the dangerous pursuit of a crash-out Brexit.

This is not an attempt to replace one coup with another. A small group of us should not be deciding on Britain’s future and that is not what lies behind my initiative. But we need to find a way forward that allows the British people to decide which course they want to take.

Yes, this is an all-white women list. No, it does not include the shadow Home Secretary, Diane Abbott, who has been fiercely Remain since the beginning and is still the most prominent black woman politician in Britain. Her explanation for this didn’t exactly help matters.

“It’s all white women who voted remain. How can that be a government of national unity?”@CarolineLucas says all those she has invited to form an emergency all-female cabinet are in senior positions in their parties, and “all happen to be white”.https://t.co/aZyu9cbCO1 pic.twitter.com/qltAWdt7jy

The whole stunt reeks of patronizing nonsense to me. How will an unelected cabinet of white women, some of whom are still in bed with the insidious dog-whistle bigotry of the Conservative Party, fix this problem or be a better solution than an unelected Prime Minister? Plenty of terrible women voted for Brexit. This wasn’t something with a strict gender line down the middle (although it is true that women were more likely to vote remain than men, but the divide was way bigger in terms of race). And boy, does it stink of obvious nastiness to include Yvette ‘end freedom of movement’ Cooper in there but not Diane Abbott, who is actually in the shadow cabinet. In what world does Abbott have neither the influence, the skills, or the relevance to be part of this fantasy feminist league?

This is a bad stunt and one that would be totally unworkable in practice, but it looks good on paper for Lucas’s supporters and has the facade of action without ever having to be put into action. It’s t-shirt slogan equality, not palpable and radical political action, the kind that’s depressingly necessary right now.