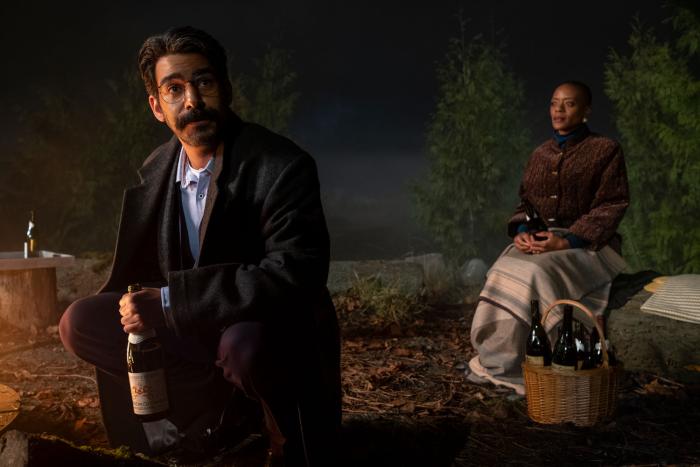 What Do Rahul Kohli's Farts Have to Do with 'The Haunting Of Bly Manor?' Only His Amazing Twitter Feed Will Tell You

I’m not much of a horror fan. I’ll admit that’s partly due to relative ignorance. I haven’t seen too many horror films in my time. I loved Get Out. Don’t Look Now is fantastic, but is it fully ‘horror’? Let the Right One In is amazing, but does it count as horror? Or does that fall under the ‘vampire’ umbrella instead. I guess it’s a bit of both. And Snyder’s Dawn of the Dead—great fun, but is that zombie, or horror, or both? My horror ignorance extends to not being aware of where exactly horror aficionados draw the boundaries of the genre.

Anyway, what I’m getting at is that I just don’t watch that much horror. My girlfriend, however, loves the stuff. Loves it. She’s got great taste too, so when she recommended I watch Netflix’s The Haunting Of Hill House, I dived right in despite my slight apathy to the genre. I’m very glad I did because I really enjoyed Hill House. It was exactly what I do want out of horror if I ever watch it: An intense feeling of dread instead of a reliance on jump scares, and—crucially—a grounding of the horror in deep character work where the real horror is more likely to be the psychological or social minefield that humanity treads.

I watched Hill House only a few months ago, so my excitement was high in the run up to its successor, The Haunting of Bly Manor. Sadly, Bly Manor felt to me like a bit of a let down after the highs of Hill House. There was less dread, the hauntings weren’t as deftly integrated with the themes or characters, and the writing in general wasn’t as strong. Don’t get me wrong, it’s still good TV. It just didn’t live up to the very high bar that Hill House had set. I suspect the series may struggle with that going forward. Hill House may well be showrunner Mike Flanagan’s equivalent of the first Boston album.

One area in which Bly Manor definitely didn’t slip was its casting and performances. Pretty much uniformly excellent, a particular highlight is old Pajiba favourite, Rahul Kohli, who plays Bly Manor’s resident chef and moustache host, Owen. We’ve been fans of Kohli here for a while. By all impressions, he seems like a top lad, and we want nothing but good things for him (he’s also an avid gamer, and a Londoner, so I feel like me and him are best mates already). Kohli’s been taking to his Twitter celebrating the hell out of Bly Manor since its release, and it’s proven a predictable delight:

Warning: Some spoilers ahead.

I have no choice but to stan ❤️ pic.twitter.com/swkkV2yNyi

To my dearest Hannah Grose… 💕 pic.twitter.com/YXAkgFnZhc

This was my first day working with the absolute scene stealer that is Amelie Bea Smith (Flora). This part wasn’t scripted, I just wanted Amelie to know that I will stop at nothing to pull focus but I couldn’t outshine her. This girl is a star in the making! ⭐️ https://t.co/dw5mtE5SgO

Choke me da… you know what? Imma leave it. #thehauntingofblymanor pic.twitter.com/VkOtW5YqFi

“Luke! Take these vegetables to Paris will you, I want them chopped up before dinner.” https://t.co/i6oUCHrXLy

I never want to hear the line, “In Paris I was a sous-chef which means they only let me chop vegetables…” for the rest of my life

OMG THIS WAS ONE OF MY FIRST EVER SPEAKING ROLES I FEEL SICK. CHICKEN SHOP MANAGER WALKED SO OWEN COULD RUN https://t.co/ooj4cJjf4t

Loool! Ravi Chakrabarti was and still is my favourite character. It was an absolute joy playing him for 5 years. I owe my life to him and iZOMBIE ❤️ https://t.co/xc4SqT25jj

The Haunting of Bly Manor in 6 seconds. pic.twitter.com/xzo2UhHZTJ

Don’t know if anyone cares but I like to make playlists for characters I’m portraying. I usually start picking songs during prep that I’ll listen to throughout shooting. Here was Owen’s playlist 💕. #TheHauntingofBlyManor pic.twitter.com/qpOmaOZskv

The ladies didn’t need protecting by any man, they just needed their dinner cooked on time. Owen was more than happy to oblige :) https://t.co/lqKaQAKM81

Benjamin Evan Ainsworth and Amelie Bea Smith not only carried our show but they also had to work with my unprofessional arse. They deserve ALL your praise. Love you both 💕 #TheHauntingofBlyManor pic.twitter.com/s8zhjoB6K1

All these new followers from The Haunting when they find out how much of a dickhead I am on social media… pic.twitter.com/FS4YkBXqik

True story, @flanaganfilm is a HUGE Whovian. When deciding on the costume for this scene, I asked for a bow tie and tweed jacket as an homage to The Doctor for Mike. https://t.co/XuCF9YyRjN

Woah! We were shown at Times Square!? Speechless. #TheHauntingofBlyManor pic.twitter.com/voCRmbpGKY

Little bit of @haunting trivia. @flanaganfilm changed Owen’s last name to my real life Mum’s name. I wanted to thank her for being the one who read with me on my audition tape for Bly. Was an amazing surprise for her. Thank you for that, Mike 💕

It isn’t. I didn’t put on an accent for the show

This last one has nothing to do with Bly Manor really but I have to include because if you didn’t already like Kohli you will now:

Wow. So today is the first time I was mentioned in an article by The S*n and I’d just like to say on behalf of the city of Liverpool: