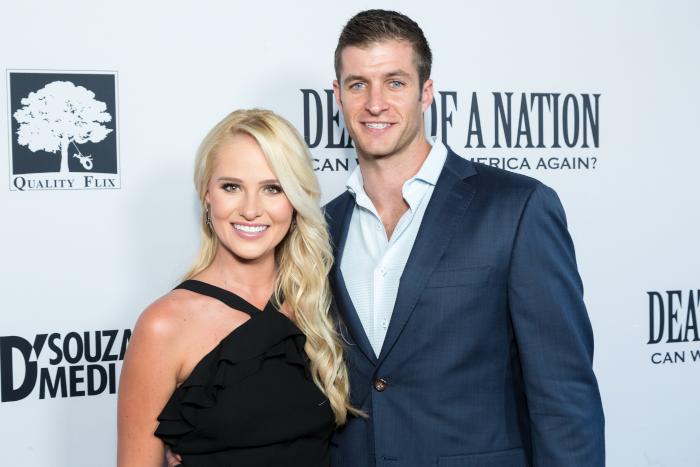 Let’s dive straight in: There is this new… platform? network? streaming site? that is aimed at far-right Zoomers. Or wants to promote GOP values to Zoomers by jumping on whichever new computery fad kids are into now. It’s called Today In America … I’m sorry, Today Is America, because nothing says I love the USA like confusing Subject-Verb-Object arrangements. Apparently, all these people originate organically from conservative Tik-Tok or something, and are in no way being funded by the Koch family nor are they a seeder from which they will find replacements for Tammy Lasaña types, once they turn 35. So what you have here is a collection of acceptable-looking under-25s, with the fashion sense of someone that picked a Town & Country magazine from the late 80s and said: “Yes, that’s class.” Also, so much spray-on tanner that it might be a Freudian slip about cultural appropriation.

But the thing is, that’s not what I am here for. After Will Sommer at The Daily Beast published some screenshots from their upcoming shows, the good side of Twitter came out in force with some A+++ snark material. They only needed four or eight screenshots to come up with a barrage of chef-kisses putdowns and I’m just going to embed them here for your enjoyment:

Gen Z Republicans have their own streaming service now. pic.twitter.com/qYsBsqymFA

"Siri, show me a meth dealer from a futuristic dystopia." pic.twitter.com/7UY5xDACXl

It looks like Miami Vice if they only investigated crimes involving cryptocurrency.

It’s not a good sign when your content for Zoomers reminds people of Millennial classics such as Dick in a Box and LMFAO:

Remember when these guys did My Dick in a Box pic.twitter.com/1lgV5lt8W0

We have lmfao at home pic.twitter.com/k6U4e5WaTx

All of them? I thought the mavericks guys looked like gay hipsters out on a date.

For the show called “Firefight”, they clearly went for somebody that would appeal to Middle Four-Generations-In-The-KKK America, but also, his name might’ve overshot the mark:

I refuse to believe Gunnar Thorderson is a real name and not an etity dreamed up by the collective unconsciousness of the right wing. Like a republican Tidus or Sin

I have a hypothesis that giving your kid a weird ass name might really fuck them up, and now it’s no longer a hypothesis.

For Firefight did they pick the host based on the most Scandinavian sounding name ever or the most that looks like a member of the Hitler Youth?

Hmm where have I seen that first guy before 🤔 pic.twitter.com/K6YF1kSkHg

I agree, his name is too hard to pronounce, ironically, for most white Americans:


At least one of these people is probably going to become the next Ben Shapiro/Toni Lahren right-wing breakout star, and I’m just gonna guess it’s not going to be Gunnar Thorderson.

But for that same amount of money you can get an even blood-purer BMW!


Gunnar's dad bought him a $70,000 GMC Sierra for a graduation present.

Colbert would be proud of this one:

One of these shows is hosted by a guy called Joe (who looks like a dehydrated Stephen Miller) and it apparently goes in the morning. Try and guess what they called it:

Damn, Cup of Joe, cause his name is Joe and it’s on in the morning? Like when you drink your coffee?? I dunno about this guy’s politics but that’s fucking genius bravo dude.

Even the subtitle of his show knows he's wrong about everything pic.twitter.com/noa1zmJt9S

But that means they would have to pay attention during English!


Imagine coming with a tag line for your Republican show as "politically right, not correct" and think that was a win


These two came in with the precision-targeted burns:


the guy in the cup of joe one looks like an honest to god hapsburg and I don’t think the morgonnn one is right either. unsettling is the word


they cropped out the roller backpack pic.twitter.com/G2gV0phN0d

The following are “suggestions” for other shows (and hosts) for this thing. Among them there is a real one, try finding which one is it without clicking on the links:

when you feel the need to remind people that your party does, in fact, allow women to join. And some of them even have! Wow!

There is still a good chance that all of this is an ellaborate prank. They do look like one of those fake shows from Dear White People or:


Starting the countdown to the embezzlement scandal … Now.

Obvious question: Where do they find these people?, well:


These aren't their real names. They just legally can't identify them as young Republicans until they become comic book villains, it's part of the process.


There is one iconic Millennial GOPer missing though:


How does Jacob Wohl not have a show?


But for real, if you wanna know where these people come from, please do read these threads:


This anti-vaxxer getting humiliated by @waltermasterson is named Ashley Jefferey.

Ashley Jefferey is an actor, with an IMDB profile.

He has no visible means of income. He has unlimited free time to attend anti-vaxx events 5 days a week.

Some context: in the late 90's-early 00's, there were numerous nationwide talent searches that would advertise at the high schools in Southern California