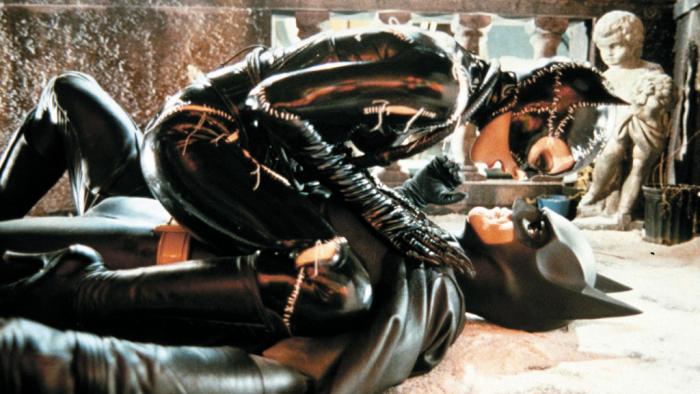 Yesterday afternoon, Variety posted an interview with the showrunners for WandaVision (Jac Schaeffer), The Umbrella Academy (Steve Blackman), and Harley Quinn (Justin Halpern and Patrick Schumacker), and discussed with them what it’s like to adapt a comic-book property for television and how to use these characters to tell stories that will keep viewers entertained and coming back for more. When Halpern and Schumacker discussed their approach to making Harley Quinn and how the show being centered around villains makes it easier to get away with what happens onscreen, they conceded that there are still limits as to what some of the characters in the series are allowed to do. Like Batman, for instance.

“It’s incredibly gratifying and free to be using characters that are considered villains because you just have so much more leeway,” says Halpern. “A perfect example of that is in this third season of ‘Harley’ [when] we had a moment where Batman was going down on Catwoman. And DC was like, ‘You can’t do that. You absolutely cannot do that.’ They’re like, ‘Heroes don’t do that.’ So, we said, ‘Are you saying heroes are just selfish lovers?’ They were like, ‘No, it’s that we sell consumer toys for heroes. It’s hard to sell a toy if Batman is also going down on someone.’”

(In fairness to DC, both Halpern and Schumacker went on to say that the company has been remarkably supportive of their series and has allowed them to push the envelope numerous times. Still, it remains to be seen if Batman and Catwoman will be shown engaging in some bedroom antics in Season 3 or if it will simply be implied via cunning linguistics.)

Of all the things to end up becoming a topic of conversation on a Tuesday morning, Batman and his sexual activities when he’s in the company of Catwoman was most definitely not on the list. And when Twitter found out about this, well…Twitter reacted exactly like how you would expect them to, by making plenty of jokes and talking plenty of sh-t.

Me: God damnit, that's it, I'm done with twitter.

Also me, on Does Batman Eat Pussy Day: pic.twitter.com/j9WVeBGYrg

Batman absolutely does and that's why his mouth ain't covered by a mask. Catwoman could demand service at any time

Batman and DJ Khaled have a lot in common pic.twitter.com/r9CAC4sFml

Meanwhile Spider-Man is up for anything. pic.twitter.com/6VMYKMcBKR

Those tweets are only just the tip of the iceberg when it comes to all of the jokes that have been made about Batman having sex, and what he’s willing and able to do when he’s having sex.

But before we get further into how funny and filthy Twitter has been about this, let’s keep the focus on Batman and what DC Comics won’t let him do to Catwoman. According to them, their reason for not allowing Batman to go downtown is because “heroes don’t do that.” 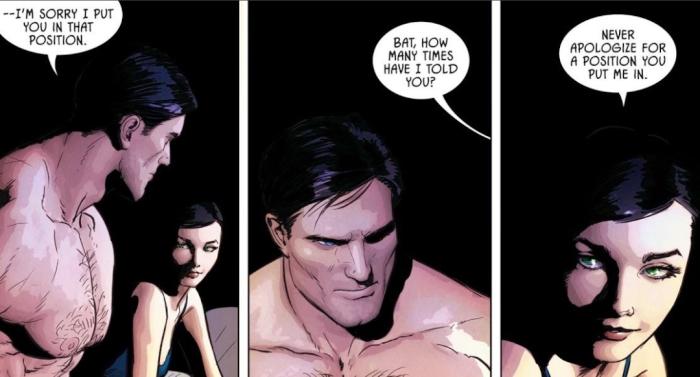 Uh … huh. Heroes don’t do that. All right, DC Comics. Let’s dive deep into some of the questionable and not entirely heroic things that you’ve allowed Batman, one of your flagship characters and one of the most popular comic-book heroes in all of existence, to do as a hero.

- Setting a member of the Red Triangle Circus Gang on fire with the Batmobile’s afterburner, even though he really didn’t pose that much of a serious threat.

- Strapping an active time bomb to another member of the Red Triangle Circus Gang and then smiling at him before knocking his ass into the sewers so that he can explode into pieces.

- Defeating Ra’s al Ghul in combat aboard an out-of-control monorail that is about to derail and crash, and choosing to not save his life like he did before so that he can bring him into police custody, but instead exit the train before it crashes and leave Ra to die helplessly. (“I won’t kill you, but I don’t have to save you.”)

- Using even more brutal methods to take down criminals (methods so brutal that even the citizens of Gotham City are more terrified of him than usual), such as using a bat-shaped branding iron to mark the criminals he defeats before they are arrested and sent to jail, which results in them being targeted and attacked by other inmates, sometimes fatally. (Yes, Batman was traumatized and lashing out after witnessing the arrival of Superman and his destructive fight against General Zod, and the murders of said criminals behind bars were financed and organized by Lex Luthor in order to make Superman go after Batman, but still)

- Who can forget that time when Batman and Batgirl (you know, the daughter of his longtime friend/colleague, Commissioner Gordon, and the ex-girlfriend of his adopted son/former crimefighting partner, Dick Grayson a.k.a. “Robin” a.k.a. “Nightwing”) got into a heated argument that ended with the two of them having sex on the roof of a building.

- Or when he arrives back home from patrol, strips off his entire Batsuit, and walks around in the Batcave completely naked with his Bat-braciola swinging in the wind for all of the readers at home to see. (At least before that issue of Batman: Damned was pulped and replaced with a panel that was a lot more shadowy and a lot less Dirk Diggler-esque.)

- And let’s not forget this unforgettable exchange from All-Star Batman & Robin, the Boy Wonder, courtesy of writer Frank Miller:

Robin: “Who the hell are you anyway, giving out orders like this?”

Batman: “What, are you dense? Are you ret**ded or something? Who the hell do you think I am? I’m the goddamn Batman.”

Hell, even other characters in Batman’s orbit weren’t immune from such questionable behavior that DC Comics seemingly had no complaints about. Remember The Dark Knight Strikes Again, Frank Miller’s very unnecessary sequel to his groundbreaking graphic novel Batman: The Dark Knight Returns? Well, the second chapter in that sequel involved Superman and Wonder Woman having sex with one another after Superman is viciously beaten by Batman. It actually has Wonder Woman attempting to motivate Superman and restore his confidence by punching him in the face while saying things like “Where is the man who stole my Amazon heart? Where is the hero who threw me to the ground and took me as his rightful prize?” right before they have sex that literally causes a tidal wave and an earthquake to occur while they’re f-cking.

Because heroes do that. They do all of these things, but the very thought of Batman letting Catwoman ride his face like the Batpod during sex is what makes The Powers That Be over at DC Comics slam their hands down on their desks like Iyanla Van Zant and say … 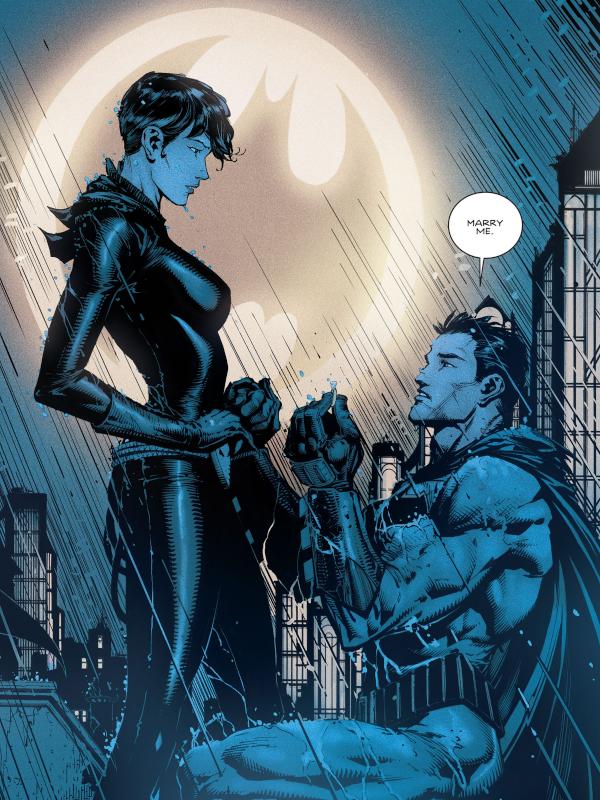 As you can see, Batman asking Catwoman to marry him is the only time that he’s allowed to be on his knees in front of her without getting into any trouble for it.

Going back to Twitter’s reaction to Batman being forbidden from getting high off of Catwoman’s watermelon sugar, the conversation soon led to people wondering which versions of Batman (Adam West, Michael Keaton, Val Kilmer, George Clooney, Christian Bale, Ben Affleck, Robert Pattinson, and even Kevin Conroy and Will Arnett who voiced the animated and LEGO versions) were willing and able to perform oral sex…

Every Batman that does or does not eat pussy, a thread: pic.twitter.com/uEnqYItdQA

Here's what I have to add to today's Batman discourse pic.twitter.com/v72KpYVY8g

…as well as discussing which male comic-book characters could f-ck and f-ck well.

Some of the names that were brought up as excellent and considerate lovers were Superman (the man not only gave up his superpowers for Lois Lane so that they could be together as a couple, as well as have sex in the Fortress Of Solitude, but he was so horny for Lois that he jumped into a bathtub with her and immediately took off his clothes so that the two of them could start f-cking) to Green Arrow (who clearly loves to head on down to “Sherwood Forest” when he’s with Black Canary) to Thor (who, according to a couple of Twitter users who shall remain nameless, would definitely go from being selfish and inconsiderate in bed when first arriving on Earth and learning how not to be a f-ckboy, to someone who would gladly eat the booty like groceries as soon as his partner gives him the green light to do so) to Daredevil (who could possibly put James Bond to shame when it comes to his sexual appetite and the number of women who are drawn to him like a magnet) to Nightwing* (who not only has the best ass in all of comics, but is considered by many to be the one who would do all the things that Batman can’t and won’t do).

*If he’s not going to complain or say no to Starfire wanting to keep her boots on when they first have sex, then it’s safe to say that Dick Grayson would be open and willing to do anything else that his partner asks of him sexually. (clears throat)

I’m sure that some of you who are reading this article and who have seen these tweets are probably rolling your eyes and wondering why there are so many grown-ass adults who have nothing better to do than talk about comic-book characters having sex and how they would actually do it.

2) Being attracted to fictional characters and fantasizing about them certainly isn’t new, and it sure as hell isn’t going away anytime soon. Hell, I just learned not too long ago that the first crush that many Twitter users had was the animated Disney version of Robin Hood (which is quite understandable after watching that film recently), so there you go.

3) There aren’t nearly enough female characters who are shown having their (cat sound) being skillfully and enthusiastically eaten, not in movies or on television (blame that on the MPAA being prudish as usual, and on men calling the shots in Hollywood who are just as selfish and inconsiderate about female sexual pleasure in fiction as they are when it comes to female sexual pleasure in real life), so yes, this is definitely going to be talked about on Twitter.

4) If we can’t talk and make each other laugh about Batman not being allowed to eat out Catwoman (and by the same company who actually once said that Batman doesn’t sit, even though he sits in the damn Batmobile when he’s traveling through Gotham City), about fictional characters and what their sex lives would/wouldn’t be like (within reason, obviously), then just what exactly is the point of this hellmouth of an app?

5) If you thought that this article I wrote was lewd and disgusting, then you don’t even want to know what the rest of the Pajiba staff had to say about this topic (it’s still less disturbing than their obsession with Eddie Redmayne in Jupiter Ascending), which left me saying the same thing about them that I say about many of the people who I’m mutuals with on Twitter. And that is… 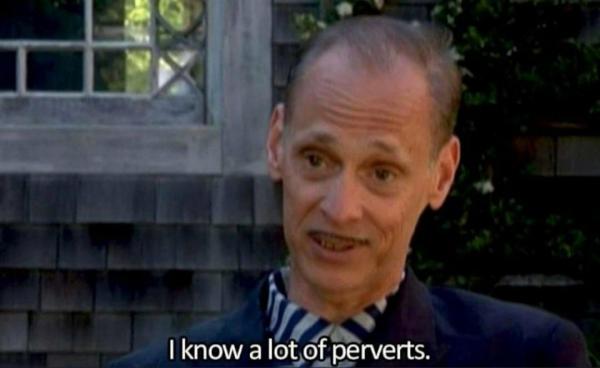