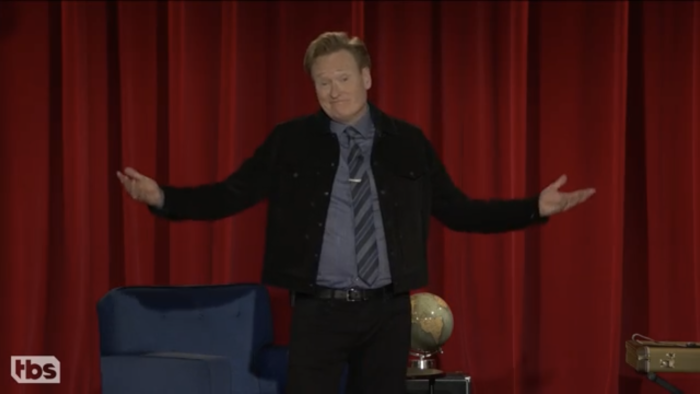 Conan Welcomes Back Live Audiences And No, You're Emotional

It’s been a long, strange, 16(?) months. Witnessing someone like Conan O’Brien perform to no audience was, and still is, strange as hell. Don’t get me wrong, Conan crushed it. There may have been a slight adjustment period (because of the mass death and uncertainty), but as time went on, O’Brien began to feel like his old self. Then, he announced that he would be leaving the late-night landscape. As we wind down to Conan’s last two weeks hosting a late-night show, audiences have returned. It was glorious.

Let me begin with the most important tidbit: HE DID THE STRING DANCE. For those of you unfamiliar, allow me to:
A) Assume you are annoyingly young.
B) Show you the string dance in all its glory.

Given the fact that Stephen Colbert also welcomed back live audiences tonight, that GIF is perfect.

Conan went on to deliver a monologue like he hasn’t missed a day. You can see him feeding off the energy of the crowd immediately. There’s a level of joy that pierced even the cold, steely heart of Conan O’Brien (I’m kidding, he seems lovely). He was up there with Andy Richter, no longer banished to the crowd of cardboard cutouts. Even a small change like that got me a little choked up. Andy was there with Conan at the beginning, almost 30 years ago, and he’ll be there with him at the end.

Conan was then joined by Patton Oswalt, who also could not contain his happiness. It was infectious. You can truly see the need to perform in front of people, which has driven the career of these two men, worn right out on their sleeves. You can see how much this means to them in their faces, and you can hear it in their voices. I’d like to bottle those feelings and wear them like a scent when I’m feeling down.

Everything about the show was wonderful and yet, bittersweet. This is the first step in Conan’s last late-night walk. The magic and emotion will soon crescendo with such force that the whole world will feel it and it’s going to be even sweeter with a crowd.