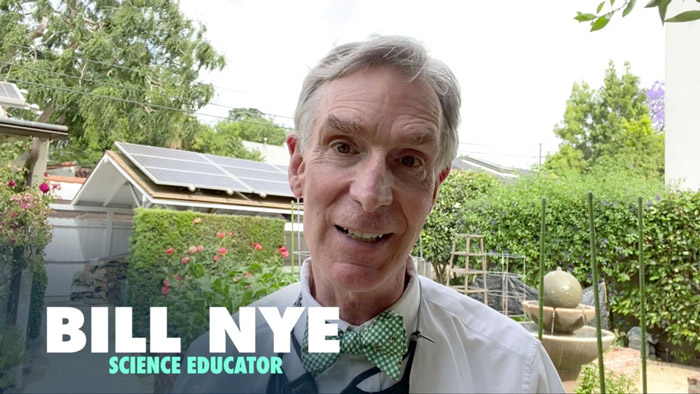 To children of the ’90s, Bill Nye The Science Guy was an icon of breaking it down. You want to understand volcanoes, phases of matter, or evolution? Bill Nye was your (science) guy. But Nye’s qualifications don’t end at TV show host for kiddos. He’s used his fame and scientific knowledge to advocate for climate change-fighting measures, and the pro-choice movement. He created a new series called Bill Nye Saves the World to tackle hot topics like vaccinations, artificial intelligence, and gender identity. Having TV show production shuttered around the world won’t stop Nye from speaking truth to ignorance. So, he took to TikTok to bring back his “Consider The Following” segment to break down the pandemic’s hottest issue: masks.

Nye adds some graphics and sound effects that give the clip a ’90s flare. He begins with his warm patter, the kind that invited kids in for years on his shows. Using a candle and an N95 mask, he gives an easy-to-follow visual example of how the mask works to keep respiration particulate from exposing others to one’s potential germs. Then, he turns to camera, to explain wearing a mask in terms even a toddler can understand:

So when you’re out in public, please wear a mask.”

“Bill Nye” is now trending on Twitter as people shared this video over and over. While most are trying to spread the word about how to combat COVID-19, there’s also tweets like this one from comedian Terrence K. Williams.

We don’t need #COVID19 tips from a washed up scientist.

Another wanna be expert

I’m not listening to Bill Nye or Fauci

Bill Nye is an engineer & a left wing propagandist. I'm not listening to his leftist propaganda. Masks are about control not safety. If you want to wear a mask do it if you feel it protects you, but do not force your dress code on me.

So even speaking proven facts in terms children can understand won’t be enough for some people. Don’t be a stupid ass. Listen to Bill Nye and wear a mask.

← The Supreme Court, Including Trump's Two Appointees, Deliver a Defeat to the President | Why Make a Cake That Looks Like Toilet Paper Though? →