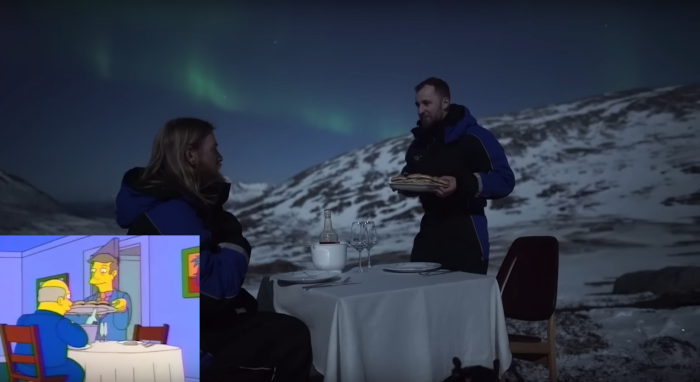 What if 'Steamed Hams' Happened For Real, Underneath the Real Northern Lights

Of all the memes to ever have memed; of all the ridiculous bits of replicating hilarity; of all the slices of shared consciousness that manifest on the internet and on other forums in times gone by, I’m glad that perhaps the greatest one of them all comes from such an ancient and hallowed place: the golden age of The Simpsons. I’m talking, of course, about ‘steamed hams’, the famous and perfect skit from the twenty-first episode of the show’s seventh season, 22 Short Films About Springfield, in which Principal Skinner tries to maneuver his way out of an escalating series of inept lies that he spins for Superintendent Chalmers in the hopes of covering up his failed cooking.

I’ve written about ‘steamed hams’ and the way it has become one of the internet’s favourite memes before, and I’m pleased to say that I’ve discovered another very worthy entry into the canon. A quite beautiful, ambitious, and unexpectedly moving one as a matter of fact. One I assumed was brand new and fresh off the meme grill, but which has actually been around for a few years! Shame on me. Shame on me for only just imbibing this lovely creation: