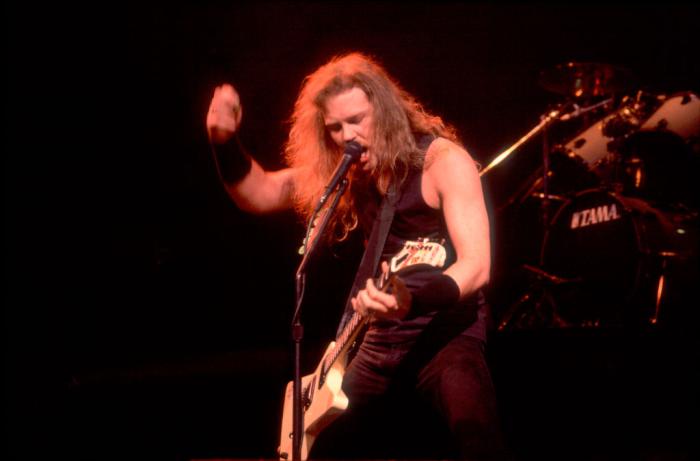 The Best Damn Live Music Clip Of All Time: Metallica Absolutely Tearing Their Way Through 'Battery' in Seattle in 1989

Slayer may have been faster, Megadeth more technical (as well as being the authors of the single greatest song the sub-genre has ever birthed), and Anthrax had a comic, mischievous element that imbued them with a unique presence, but of all the bright, ferocious lights in the constellation of metal that we now consider The Big Four Of Thrash, it’s difficult to argue against the position that Metallica were—and are—the most complete of them all.

We can be quick to take them for granted now. With time, success, and the legions of imitators and subsequent innovators that followed and then took the genre into new places, it’s sometimes easy to forget just what the entity known as Metallica means. Those first three albums the band made constitute a body of work that is for my money some of the finest music ever recorded. 1983’s ‘Kill ‘Em All’ is the raw and primordial cosmic roar of an entirely new world being born, and listening to it now is still as an electrifying experience as ever. ‘Ride The Lightning’, which followed only the very next year, is one of the most insane quantum leaps in ambition found in any medium, the songwriting and performances therein reflective of something closer to a normal band’s decade of progress (it’s also my personal favourite). And then there’s ‘Master Of Puppets’, the highlight of thrash metal’s banner year of 1986, and a mammoth work of consolidation and confidence—the sound of a band at the very peak of its powers. The metal world would be a very different place without these records. Yes, it’s been a long time since they’ve recorded anything even close to the quality of that trilogy, and they likely never will again, but it doesn’t matter. Releasing just one of those albums would have been enough to secure your place in eternity.

Iron Maiden from 1980 to 1988. Bob Dylan from 1963 to 1966. Stevie Wonder from 1972 to 1976. That is the prestige level of quality that Metallica’s initial run exists in. Truly mind-boggling stuff. 1988’s ‘…And Justice For All’ is genius in places—and a lot of people’s favourite—but it suffers from a bit of bloat, a sometimes plodding nature, and issues with bass (not your fault, Jason, you rock). 1990’s ‘The Black Album’ has some undeniable bangers, but the seismic shift it represented, while perhaps historically necessary, took it away from what Metallica did best. There are a good number of damn fine, often amazing, songs scattered in the band’s discography in the years since then—plus I’ll always fight for the overall deliciousness of 2008’s ‘Death Magnetic’—but everything will naturally always suffer when compared to that initial run. And that’s fine. Nobody can keep that kind of material up forever. You’re not meant to. It would likely violate some fundamental law of physics. Even the most gifted, hard-working, otherwordly geniuses can only produce so much before moving on, one way or another. What matters in the end, really, is the quality, not the quantity. Sure, many bangers are great, thank you very much, but just one can be enough to blow your mind to smithereens and scatter the microscopic remains among the stars.

I know I gave the title of greatest thrash song ever to the towering achievement that is Megadeth’s ‘Holy Wars… The Punishment Due’, and I do stand by that. In its scope, aggression, ambition, dynamics, lyricism, and instrumentation (that final Mustaine solo being a serious contender for best metal solo ever), it really is hard to put any other track up against it, and not have it wither away in the face of its nuclear firestorm. There are those, however—and I’m sure it’s a significant number—who would champion the title track from Metallica’s third album instead. It’s plain to see why. I wouldn’t even fight too hard against it. It’s not the wrong answer. It’s just not the right one, either. Funnily enough, though, there is a track on ‘Master Of Puppets’ that I might draw attention to instead here. It might not be the best thrash song ever—though it wouldn’t be far off—but it might well be the most thrash thrash song ever.

Sorry for all the italics. Thrash just gets me all amped up. Italics levels of amped up!

Since you presumably read the title of this post before reading anything else it’s nearly redundant to say it, but, yes, it’s ‘Battery’. I have a soft spot for album openers, and ‘Battery’ does a perfect job of opening what many consider to be Metallica’s finest. It also serves as a fantastic example of a particularly delicious metal tradition: Starting an album with a short instrumental that leads into a ferocious first track proper—think of Maiden’s ‘The Ides Of March’, Priest’s ‘The Hellion’, or Annihilator’s ‘Crystal Ann’. That gentle yet ominous acoustic guitar figure, gradually layered and harmonised in three parts for 36 seconds, sets the scene for the slaughter that is to come: A 192 BPM face-melting monster that is the epitome of ‘not fuc*ing about’. Once it fully gets going, there’s only 4 minutes before it’s done. It doesn’t need 6 or 7 or 8 minutes—not that there’s anything wrong with that, and in general I’m very much inclined towards long songs—but in just 4 minutes (5 if you include the intro) ‘Battery’ picks you up, whips you into the sky, lashes you with a lightning storm mosh pit, and then ends by abruptly meteor striking you back into the ground, all the while somehow making time for a post-first-chorus solo and dynamic mid-section. ‘Battery’ does not fu*k about. Nothing is longer than it needs to be. Every single note is in perfect service to the aggression that defines thrash metal. Even the subject matter is pure thrash: ‘Battery’ is named after a club that was very important to Metallica in their early days, the Old Waldorf at 444 Battery Street in downtown San Francisco, and it is a love letter to the community of like-minded people that got Metallica to where they are. So, best thrash song ever? Maybe not. But most thrash thrash song. No doubt.

All this might make it sound like I’m building the case for Metallica’s legacy as being one that was made in the studio. While the immortal quality of that record is undeniable, just like the best bands their true essence exists in the ephemeral chain of ineffable magic that is their gig history. Live music, man. That’s where it’s at. Fittingly, it’s a live version of ‘Battery’ that is the real heart of this effusive bit of Metallica worship. So let’s take a trip back in time, to Seattle, August 1989, to the boys’ ‘…And Justice For All’ tour. It’s three years since the tragic death of their good friend, founding member, and crucial musical inspiration, Cliff Burton. They’re touring the first album to have been recorded without him, but at least half of the songs they will play will be from albums that Cliff still featured on. For some bands that kind of thing might be a reason to go about it all in a sombre, or downbeat, fashion.

This live clip of set opener ‘Battery’ is one of my favourite live clips of all time. I watch it far too often. It’s an absolute masssacre. A masterclass in aggression and precision. ‘Fuk em up’ it says on James Hetfield’s guitar, and that is exactly what Metallica do here. ‘Battery’ is already a fast song. It is stupidly hard to learn to play, and easy to injure your hand trying. Here, the band play it even faster, brutally tearing through it in a hellfire tribute that would make Cliff Burton proud. Kirk is pure quicksilver, his fingers almost flying off in that already-blistering-on-the-record post-first-chorus solo. Lars plays as if a man possessed, smashing the drums with a speed and force that beggar belief. Jason Newsted, stepping into some truly formidable shoes, more than does justice to the legacy of the man who stood in his spot before him.

And then there’s James Hetfield.

It’s a well known fact that James Hetfield’s right hand is the eighth wonder of the world. We know this. It’s not news. Certainly not in 2022. Yet watching this video, even for the thousandth time, I find myself slack-jawed in amazement. Famously, the band don’t keep time to Lars’ drums, they set their tempo and lock themselves in to the ludicrous beast that is James Hetfield’s right hand. The international definition of a second is based on the radiation frequency of the caesium 133 atom, and to be honest: Fuc* that weak sh*t. Just set it to James Hetfield’s right hand and be done with it. How he plays guitar like he plays in this clip of ‘Battery’ while also managing to sing, command the crowd, and to exude the power and force that he does defies belief. The whole band plays like creatures from another planet. It’s a performance beamed from another dimension, and a record of a band scaling heights that few ever do.

‘Fuk em up’ indeed. Watching this clip, all I can ever think of is the words of the lads from Lost in Vegas: ‘It’s crazy how you’re sitting down, and you’re sweating.’ Because this? This is fuc*king thrash!