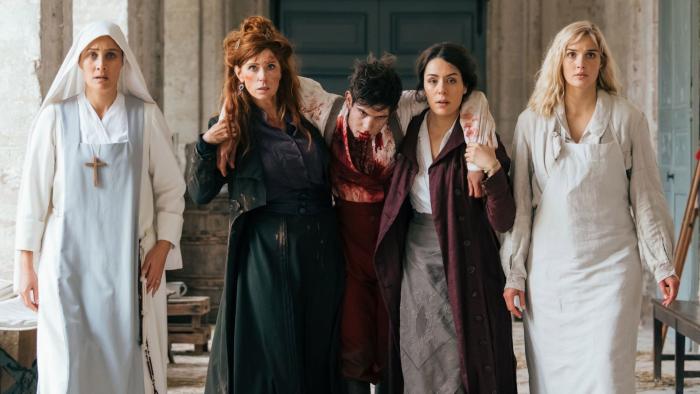 'Women at War' Review: The French Can Do Schlocky Prestige Melodrama as Well as Americans

Here’s an underrated cultural misconception: That the French don’t make schlock. Not in the sense that they can’t make bad movies or TV, but in the sense that even their most mid-Middlebrow is a few tiers above whatever a Julian Fellowes or a Ryan Murphy could come up with. That’s how Luc Besson managed to convince the Anglo market that his movies were an elevated breed of action-thriller-sci-fi and not just a glorified Paul W. S. Anderson.

No, the French are just as capable of making mediocre stuff that is beautiful to look at, easily digestible, and easily forgettable. It’s just that the “Product du la France” label adds a mystique of arthouse that may trick us into thinking we are seeing a legit work of art, even moreso if it’s a period piece

That’s the case with Women at War (Les Combattantes), produced by the private French channel TF1 and currently streaming on Netflix. It is a spiritual sequel to 2019’s The Bonfire of Destiny (Le Bazar de la Charité), produced and directed by the same team of Iris Bucher and Alexandre Laurent, it reunites the same leading cast of Audrey Fleurot, Camille Lou and Julie de Bona, with the addition of Sofia Essaïdi, this time for a story set at the outbreak of World War I.

It’s 1914 and the German Army is advancing quickly over a little town in Eastern France. The French Army is still wearing red pants, so the dead and wounded pile up while the lives of four women, all Strong and Ahead of Their Time, intersect. There is Marguerite (Fleurot), a sex worker in her late 40s who arrives in the town and starts working at the local brothel. She carries suspicious maps tracking the movements of the army, but it is quickly revealed that she is actually following the son she gave up for adoption, Colin (Maxence Danet-Fauvel). There is Suzanne (Lou), a feminist nurse running from the law after a botched abortion. She winds up in the local convent, being used as a campaign hospital. There is Agnès (de Bona), a Mother Superior at the convent, facing a crisis of faith and of calling. And finally, there Caroline Dewitt (Essaïdi), the wife of a local industrialist starting up a truck manufacturing company, whose husband and entire male workforce is drafted for the war, because again, the French Army was at the peak of its idiocy and somehow, they couldn’t figure out that manufacturing trucks is something you need to keep going during an all-out war. Caroline also shares a past with Marguerite.

From this set-up, and in just eight chapters, Women at War crams in more A-plots and subplots and sidequests than a Brazilian novela. Suzanne takes the identity of the woman who died helping her run away, but it turns out she had a “husband,” Lucien (Vincent Rottiers), a French aviator being blackmailed by the Germans into spying for them. Also, she falls in love with the dashing surgeon at the convent-hospital, Major Duvernet (Tom Leeb), whose father is the general commanding the zone. Agnès tends to a shell-shocked soldier found wandering naked in the woods, who turns out to be a kind-hearted (and dashing) German soldier. They fall in love, do the dirty and she is blackmailed by the convent’s priest who is also abusing novices. Marguerite clashes with the sinister pimp of the brothel, Marcel (Yannick Choirat), who also falls for her and sells heroin to the nearby military camps. At the same time, she strikes a friendship with her kindhearted son, who unaware, falls for her too. But poor Caroline takes the cake, as she has to contend with her unresolved issues with Marguerite, a mother-in-law (Sandrine Bonnaire) who detests her, a shady and rapey brother-in-law (Grégoire Colin) that wants to take over the factory and turn it into a munitions plant while also trying to kill her. Caroline manages to keep the factory afloat by hiring the wives of her employees while coming up with the idea that these trucks things could be used as ambulances. Who could drive them? Why, former sex workers from the brothel fired because they had syphilis.

It’s a lot, almost comically so. Based on the actual contributions of French women during World War I, the production values are spectacular (the same Production Designer from Bonfire, Hervé Gallet, returns) and the director tries his hand at long takes. But the problem is that this miniseries, just like its spiritual predecessor, thinks that being graphic — about the war and what women went through back then — for historical realism. The characters are either brave, kind, and selfless with a few flaws, or cynical and cruel villains. But the biggest problem is that Women at War, just like The Bonfire of Destiny, thinks it’s smarter and more feminist than it actually is. Every single plotline is resolved too neatly and too quickly for the melodrama to land into any other idea than “The Great War sucked and women back then had it terrible, but things have changed, y’know?” In the case of Marguerite, too tragically in a predictable way. Overall, Women at War is perhaps less schlocky than The Bonfire, but it’s way more melodramatic and yet perfectly Middlebrow.