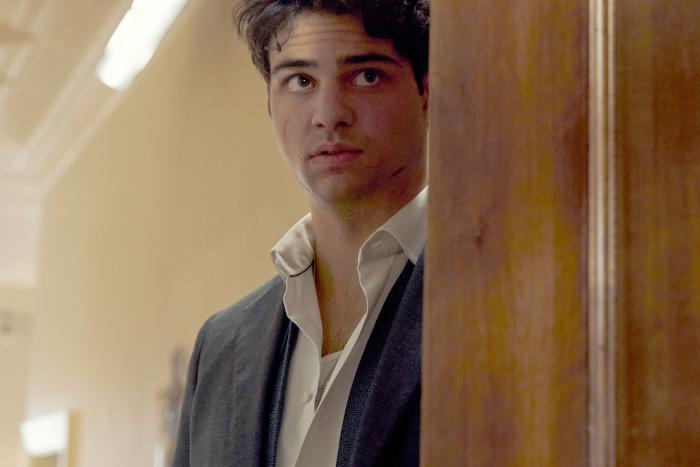 Noah Centineo may not be as famous as Timothee Chalamet, but thanks to Netflix, people under the age of 25 have probably spent more screen time with him. He starred in the charming and hugely popular To All the Boys trilogy. Netflix has endeavored to parlay that popularity into a couple of barely mediocre films, The Perfect Date and Sierra Burgess Is a Loser. Unfortunately, even outside the Netflix ecosystem — Black Adam and Charlie’s Angels — barely mediocre has been Centineo’s brand. The Recruit, alas, doesn’t change that.

The good news, however, is that The Recruit is Centineo’s first real foray into episodic television, and while the series itself is slightly better than OK, viewers do get to spend the better part of eight hours with the actor who, to his credit, hasn’t shaken off his scruffy, Ruffalo-like charms.

The Recruit comes from Alexi Hawley (brother of Fargo’s Noah), the guy behind Castle and The Rookie, and the Netflix series plays in that same ballpark: It’s essentially a workplace sitcom masquerading as a spy drama, like Chuck, only Centineo is better than Zachary Levi, but everything else — including the supporting characters — about Chuck is otherwise superior. As network fare, I lean into these kinds of shows to provide a break from the heavier cable and streaming dramas and Netflix binges, and ultimately I think The Recruit might have been better suited to weekly viewing.

Alas, it is what it is, and what it is is Centineo playing an entry-level lawyer in the CIA who is given entry-level grunt work but stumbles upon a big case involving a former spy, Max Meladze (Laura Haddock), who has resurfaced. That main storyline involves a lot of international settings, decent action sequences, double-crosses, and the odd murder or three, but it’s also the least compelling part of The Recruit. It’s nothing we haven’t seen in dozens of other spy series.

Where The Recruit excels is when Centineo charms his way through the workplace comedy opposite asshole co-workers (Aarti Mann and the always fun-to-see Colton Dunn from Superstore), the reluctantly supportive boss (Vondie Curtis-Hall) and the no-nonsense office hook-up (Kaylah Zander). There’s also an effective will-they/won’t-they situation between Owen and his roommate and ex-girlfriend, Hannah (Fivel Stewart), who is almost as winning as Centineo himself.

It is Centineo that carries most of the series on his back, and he acquits himself well in a lightweight and entertaining series that doesn’t deserve him. I’m sure it’s been good for his career, but Centineo should take a break from the Netflix algorithm and find a sitcom or romantic comedy worthy of his talents. In the meantime, The Recruit gets the job done.

Be warned, however, that the series ends on a major cliffhanger, and Netflix is fickle about its renewals. The hours watched suggest that renewal is 40/60 against returning for a second season: It fetched 95 million hours viewed in its first full week on Netflix, which is well below Wednesday and Emily in Paris and comparable to Pieces of Her in its first full week, which was canceled after one season. If the series holds well in the coming weeks, it may get a renewal, but if it bottoms out, I wouldn’t expect it, which means viewers may feel intensely frustrated with the cliffhanger.