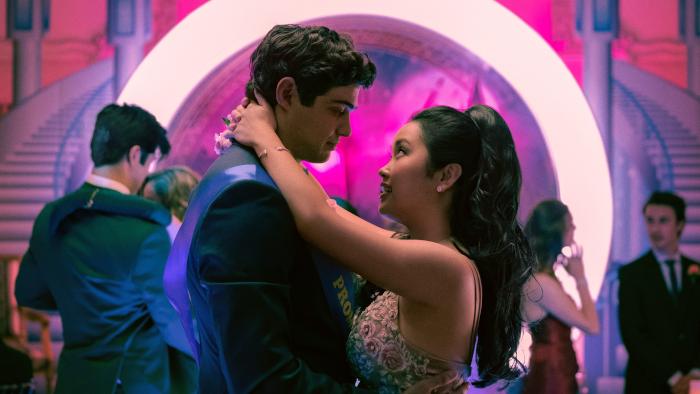 Review: 'To All The Boys: Always And Forever' Falls Prey To Main Character Syndrome

First came To All The Boys I’ve Loved Before, which introduced rom-com lovers to bookish heroine Lara Jean Covey (Lana Condor), and her unexpected Dream Boy, Peter Kavinsky (Noah Centineo). Then came To All the Boys: P.S. I Still Love You, which gave this picture-perfect romance a juicy love triangle. Now, comes the final chapter in the franchise adaptation from Jenny Han’s YA trilogy. And To All The Boys: Always And Forever suggests that’s for the best.

P.S. helmer Michael Fimognari returns to direct this third installment, which is set in Lara Jean and Peter’s senior year. They’ve survived jealousy, insecurity, romantic rivalry, and now seem destined to be college sweethearts at Standford University together! Naturally, aspiring author and devoted dreamer Lara Jean has the rest of their futures planned out. A rollicking fantasy sequence rolls audiences through graduation confetti to wedding bells, house painting, baby-having, and a book signing. However, this train to happily ever after is derailed when she doesn’t get accepted to Stanford. (Peter got a lacrosse scholarship.)

Hijinks ensue as she tries to hide the bad news from Peter, then pivots to planning to go to a neighboring college. But then this compromise is threatened when a class trip to New York turns Lara Jean’s head to take in the wonders of Manhattan and NYU. With prom approaching, the couple has to face a future that could fling them to opposite ends of America. It’s a familiar problem for teen romances in film, TV, and real-life. Unfortunately, Katie Lovejoy’s script brings little specificity to this issue.

Stanford is defined by school colors, a fight song, and a quirky tree hat. UC Berkley is defined solely by dialogue that notes it’s nearish Stanford. Even NYU is thinly depicted, showing prospective students playing tourist in Washington Square Park, then rocking out at a rooftop party. As such, what Lara Jean and Peter want from these places is ambiguously defined, as are their fears about doing long-distance. No new love interests are introduced as a symbol of the threat of falling for another. No discussion of post-collegiate life is discussed that might keep them apart. So the presumed failure of a long-distance relationship feels vague and not all that threatening. After the first two films offered such thoughtful takes on rom-com expectations, this fumbling feels infuriatingly lazy. Yet it’s not To All the Boys: Always and Forever’s greatest problem. That’d be Lara Jean.

Poor Lara Jean has fallen prey to Main Character Syndrome. It’s a sickness most often seen in the protagonists of romantically inclined sitcoms (rom-sitcoms?) like Scrubs, Sex and the City, and How I Met Your Mother. Like To All The Boys, these shows are grounded in the mindset of their love-seeking main characters, who own the voiceover narration, usher audiences into their wild fantasies, and have the final thoughts on every lesson learned. As the series goes on, the supporting characters around them go through major changes, taking on new jobs, getting married or divorced, and having kids. But the hero remains in arrested development because if they truly mature the series has no juicy problems to build episodes around anymore. So, J.D. turns into a vexing third wheel. Ted Mosby becomes an increasingly detestable Nice Guy. Carrie Cheats on Aidan with Big. And we’re left screaming at our TVs in frustration, watching our blossoming hero turn rancid.

Lara Jean doesn’t go to the maddening lengths of her TV predecessors. However, she aggravates as she burrows into her own fantasies, and leaves Peter out in the cold. Over the first two films, he’s repeatedly proven a warm shoulder to cry on and a trusted confidante. Yet, she still keeps secrets from him and prefers the fantasy version of Peter who pops into her room like magic. Plus, despite having one single romantic relationship under her belt, she’s spouting off romance advice on everything from shared interests to wedding aesthetics, no matter that such advice is unsolicited. Her friends and family take it in stride, even as Lara Jean begins to regard her beloved boyfriend not as a person but as an obstacle to her new dream.

A sullen subplot introduces springing a cross-country relationship on Peter would be a pretty big blow. There’s even a scene where he explains directly to Lara Jean that “there’s nothing worse than feeling not chosen.” And yet! Lara turns to rom-com nonsense of grand gestures and prom tropes to try to comfort her living breathing boyfriend, who has made quite clear his emotional needs. Spoilers: a box of trinkets is not it!

To All the Boys: Always and Forever is just as visually sumptuous as its predecessors. It boasts the same crew of colorful characters, including Lara Jean’s snarky bestie (Madeleine Arthur), mischievous little sister (Anna Cathcart), and big-hearted dad (John Corbett). It name-drops more rom-coms and rolls out a surprising and solid tribute to The Big Lebowski. Condor and Centineo still crackle with chemistry, and the latter reminds us why his Kavinsky became a summer sensation. Yet the charm is dying on the vine.

Rather than giving a fresh feel to familiar rom-com beats, To All the Boys: Always and Forever feels like it’s going through the motions. Instead of the rapturous conclusion with careful callbacks to big moments, it feels like a hasty photo montage slapped together by an app. It plays on our affection for past magical moments but does not offer enough on its own. So, in the end, this final chapter may be pretty and cute, but it’s far from the sendoff this sweet series deserves.

To All the Boys: Always and Forever hits Netflic on February 12.

← Review: Bone Dry 'French Exit' Understands Michelle Pfeiffer's Star Power, Seems Confused About Everything Else | So, You Want To Read a Romance Novel This Valentine's Day? Here's Our Genre Primer →