Who Is Kamala Khan, Why Did Disney+ Change Her Powers, and Why Are People So Mad?

I remember when Disney+ released the Ms. Marvel trailer like it was yesterday. It was vibrantly colored, full of Scott Pilgrimesque thought bubbles and peppy music. We saw Kamala Khan (Iman Vellani), a Pakistani-American teen Avengers super fan, particularly of Carol Danvers. She’s a Jersey City girl navigating her family, faith, and high school issues. I watched it no more than 20 times and then went on Twitter to see that everyone found it as joyous and uplifting as I did and we all celebrated together HAHAHAHAHA NO.

Instead, the Extremely Online crowd divided themselves into 3 fairly equal groups with their own take on the Ms. Marvel trailer. Some of us were thrilled with the trailer. It looks fun! Then there were the usual suspects who come out every time there’s a new woman-forward or non-white superhero production. You know the type:

But there was a third group I didn’t expect, though perhaps I should; the number of fans who were upset at the non-canonical nature of Kamala’s power origin and appearance. And there were a lot of them. So here’s a quick explainer on Kamala Khan, aka Ms. Marvel, and why it seems like so many people are down on this version of the character.

So who is Kamala Khan?
*deep breath*
Okay, here goes. In 2013 there was a cosmic Marvel comics event called “Infinity.” Yes, Infinity War and Endgame are partly based on these events. That led to another multi-title event known as “Inhumanity.” See, in the Marvel-616 universe no one had screwed up the Inhumans so bad they were retconned out of existence, unlike here. During that war, a battle between Thanos and Black Bolt — leader of the Inhumans — ended with the Terrigen mists that activate Inhuman abilities spread all over the earth. Every human with recessive Inhuman genes grew a cocoon. They emerged with physical mutations and/or superpowers.

Enter Kamala. A self-proclaimed second-generation “brown girl from Jersey City,” Kamala was a Captain Marvel fanatic who dreamed of becoming a hero or at least being accepted by her peer group, who ran the gamut from obnoxiously fake tolerance to outright hostility. After managing to hide her emergence from the Terrigen cocoon from her loving but conservative parents, Kamala models a costume after Carol Danvers’ suit and tries fighting crime. She’s a polymorph, able to change the size, shape, and appearance of her body. Her classic “Embiggen!” move typically involves punching someone with a super-sized fist. After a couple of heartwarming and entertaining team-ups, including one with Wolverine that goes down as the most adorable odd-couple pairing in comic book history, Kamala gets the blessing from Danvers herself to use the Ms. Marvel moniker. She works her way through the cultural and social issues around being a superpowered Muslim American girl.

Why are people upset?
Great question! There are a few groups upset by Bisha K. Ali and Iman Vellani’s interpretation of Kamala. The first, the “usual suspects,” have their typical excuses. She’s too brown. She’s too Muslim. She’s not anorexic. She’s a she. The trailer is too poppy, too cartoonish, too joyful. They hate it for the same reasons they hated Captain Marvel, Shang-Chi, and frickin’ He-Man. They have no coherent argument, just a lack of imagination that keeps them from enjoying properties that don’t align with their subjective view of the world. Exhibit A:

Can't wait to skip this crap

And that’s enough about them.
There’s a collection of comic purists who, for one reason or another, are disappointed in Kamala’s new gifts. Rather than manipulating her physical structure, this Kamala uses hard light constructions much like Carol Danvers or Monica Rambeau (from WandaVision). It’s a significant change and some feel it’s derivative. Exhibit B:

I’ve been thinking on it and I really dislike the change to Ms Marvel’s powers, I get you can’t do terrigen mist but come on.

I just really hope they don’t change anything else, Kamala is important. pic.twitter.com/KGfdr3nM0g

Others have more valid concerns: if Ms. Marvel fails — which I strongly doubt — Marvel/Disney may learn the wrong lessons. Exhibit C:

There are also people who feel she isn’t Muslim enough … ? Exhibit D:

in fact Ms Marvel doesn't represent Muslims at all.

As a white dude who’s never attended church, I’m not qualified to address that critique. All I can say is the cast, directing, and writing team makes me confident they’ll do as well as anyone when it comes to showing Kamala’s home and school life, including her faith. I don’t see anything in the 108-second trailer that suggests otherwise.

Why DID Disney+ change Kamala’s powers?
I don’t work for Disney. But I can think of several good reasons for the change. First, the effects team already knows how to handle light projections. They looked great in Captain Marvel, Shang-Chi, and WandaVision. It’s an effect that works very well and I’m sure they have any number of templates from which to work.

Second, it creates continuity between characters who are part of the current batch of Avengers and the ones coming after. Carol was the original; Monica and Kamala are the inheritors of her gifts. As the MCU becomes more “cosmic” in scale, it links these powerful women.

Third, the Inhumans are DOA on the small or silver screen. I don’t know what Scott Buck thought he was doing in 2017 when he created ABC’s Inhumans, but the end result was a show with effects and writing so shoddy that Mickey Mouse put it down faster than he did Old Yeller. The 8 episodes hiding in a shameful corner of Disney+ like Quasimodo in the bell tower are likely the last exposure Inhumans will have any time soon. If you ask Daisy Johnson about her lineage today she’d say “Haha no… I thought I was Inhuman but it turns out I’m just a regular ol’ mutant. Actually, I received my invitation to join the X-Men yesterday, sooo…” The Inhumans are done for the foreseeable future. Disney won’t tie that albatross around Kamala’s neck.

Finally, the explanation I thought most obvious: no studio can create realistic human flesh and features via CGI. Don’t believe me? Exhibits E - H:

That screenshot of Banner in the Hulkbuster armor is trash but it doesn’t look any better in the movie. The Adam Project is brand new and I enjoyed it much more than Jason, but there’s no denying that the young version of Catherine Keener still looks awful. At one point her forehead expands to street mural size. We are not yet at a place where we can imitate human skin, muscle, and expression and have it appear lifelike. Here’s a typical example of an embiggened Kamala. 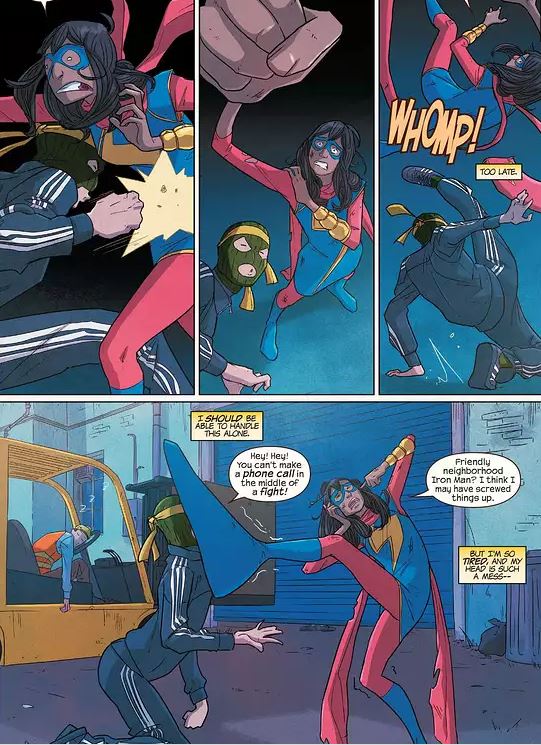 It looks great on the page! It works in traditional animation and is serviceable in a game like Marvel’s Avengers, albeit less so. But live-action? The best we could hope for is it looks cartoonish. At worst, it will look like Kamala’s arm was replaced by a giant phallus. The animators won’t need to sneak it in, like “SEX” in The Lion King’s dust clouds. The internet will do it for them. And so Kamala projects giant light fists rather than expanding her own body.

That’s not to say people’s concerns aren’t valid. Kamala’s Inhumanity is an allegory for her life as an outsider. Like her faith and ethnicity, it separates her from most of the people in the community. It’s a source of conflict with her family as she tries to hide her nature and extracurricular hero work. It works. But there’s no way to tell from this trailer what path her journey takes. My guess? The power bracelets that have everyone worked up are a temporary measure and by the end of the season, we’ll get a “the power was in you all along” scene. We always do.

So relax. Wait until we’ve seen more than two minutes of footage. With almost 3 months to go before the premiere, it’s important to conserve your energy. Watch the pilot in June and then jump to conclusions.


← 'Pink Flamingos' At 50: John Waters' Cult Classic Celebrates Half A Century Of Unparalleled Filth | The Best & Worst of the Scammer Series: 'The Dropout,' 'WeCrashed,' and 'Super Pumped' →


Image sources (in order of posting): Screenshots for Avenger's Infinity War, Rogue One, The Adam Project, The Goldbergs; Marvel Comics