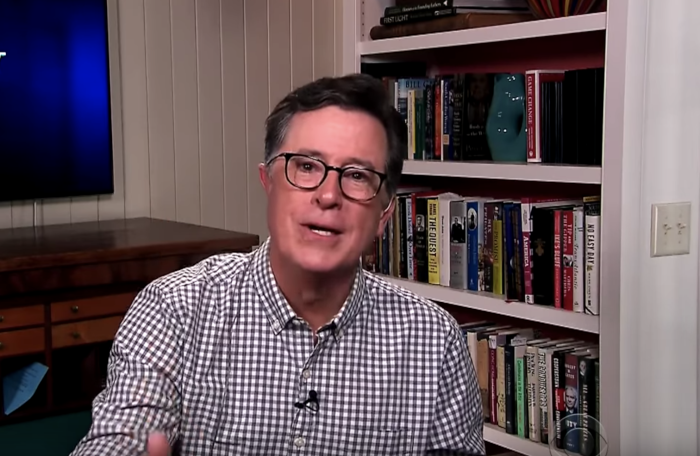 'Who Gives a Sh**?': An Exasperated Stephen Colbert Is Fed Up with The President

Good morning. It’s Wednesday. Today is the first day of Passover. Chag Sameach. Yesterday, the number of fatalities spiked again in NYC, although officials are still hopeful that the city is plateauing, because of the declining number of hospital admissions. This all tracks along with social distancing efforts, and I’ll tell you why: Those who are passing away typically do so around four weeks after transmission. This is going to be hard to believe, but it’s only been about four weeks since those lockdowns went into place in NYC, California, and in other parts of the country. It’s April 8th. On March 8th, the NBA season had not yet been canceled. Because we lack the ability to test on a massive scale, hospitalizations and deaths are the true indicators of how much this virus has spread. As hospitalizations begin to decline, deaths from those hospitalizations should decline about two weeks later.

Meanwhile, I know that a lot of us have also been reading about cytokine storms — this is generally what happens to otherwise healthy people when their immune responses overreact, which has been killing some people who otherwise do not fit into those risk groups. (And whenever I see Chris Cuomo, I think, “Oh sh**. That guy has a kick-ass immune system, doesn’t he?”) The good news on that front is that, in New York, they are finding therapies that have been effective against those cytokine storms — some sort of steroid plus some sort of IL-6 inhibitors. These therapies will soon go into clinical trials, but they are already seeing good results. From NPR:

“It looks like if they get the interleukin-6 [drug] right as this cytokine storm is ramping up, the impact was dramatic,” he says. In one case, a woman who was close to being put onto a ventilator regained the ability to breathe on her own in a matter of hours. Another patient spent only a brief stint on a ventilator, as opposed to the weeks typically required. As of Tuesday, he says he is treating dozens of patients with steroids and IL-6 inhibiting drugs.

“The impact was dramatic,” says Dr. Daniel Griffin, chief of infectious disease for ProHEALTH Care Associates, a group of physicians that serves the New York City area. The first six patients he treated all appear to be improving, at least for now, he says. “Yesterday was a good day.”

it’s one thing we may be able to worry about a little less in the coming weeks.

I’m sure many of you have also read about treatments being conducted with the plasma of those who have recovered, and the results there have also been heartening. Trials will roll out in NYC on that front, as well. There’s a really good episode of Radiolab out right now about a doctor in California who was trying to find plasma for her father — also a doctor — and in doing so, ended up becoming a plasma hook-up for many others across the nation. Ursula steered me toward the episode, and if you’re in the mood for heartwarming stories, check it out. Really, the sort of nice thing about this is that, for those who have had the virus, it offers a real opportunity to help, and as pointed out in the Radiolab episode, there is some symmetry to it: The infection rate is about 1:3, meaning one person typically infects three people. Meanwhile, the plasma from someone who has been infected can also aid in the recovery of three people.

I bring all of this up because it is reality. It is what is actually happening. Social distancing efforts are slowly, painfully starting to work. Doctors are experimenting with new treatments and finding some success, and those successes will be tested in clinical trials. New tests are being developed. Small companies — like a tiny one in Guilford, Maine — are working double-time to make the supplies necessary for those tests. Research universities — like the University of Pittsburgh — are doing fantastic work right now, and antibody tests are coming on board. Here’s the thing about those antibody tests, too: It will not only tell us whether we had it — even if we were asymptomatic carriers — but it will also open up the universe of people able to give potentially life-saving plasma (when I was younger, I used to give plasma 2-3 times a week for several years. It’s a trip!)

Again, this is reality! Donald Trump’s press conferences, on the other hand, are clown shows. Aside from their ability to piss off journalists (and late-night hosts), and drive more stories, they don’t really mean anything, because Donald Trump does not actually say anything of value. But those news conferences are putting the nation into moods that are already worse than they are. Anderson Cooper and Don Lemon lashed out yesterday. Chris Cuomo — whose fever has returned — is feeling “mean,” especially about in-person voting in Wisconsin yesterday.

Stephen Colbert is also on edge, as many of us are after having been at home for a month. Colbert lashed out at the President last night on Late Show.

“You know what? Who gives a sh**? Trump doesn’t understand that no one cares about these hissy fits anymore. All of this drama no longer plays to the camera, sir. Not even to your own supporters, because it doesn’t matter who you voted for. Everyone just wants to know the truth, because that’s how you stay alive. So grow up, and do your damn job. We have to. You should, too,” Colbert exclaimed before asking, “Is it still Tuesday?”

Colbert also tackled in-person voting and the sh*tshow that’s going on in the Navy right now, but I would rather leave you with this. Roxana and Lainey put this in Pajiba Love yesterday, but it’s worth seeing again. It’s Stephen Colbert playing with John Prine a while back. It didn’t make it onto the show at the time, but as Stephen Colbert notes in the video — again, this predates our current situation — “We’ll probably do this just for the Internet unless something terrible happens, and we have to cheer up the world.”

There has never been a better time to cheer up the world, and what a terrific performance. RIP, John Prine.


← Kaley Cuoco Has Been 'Forced to' Live with a Dude Name Karl She Forgot She Married | R. Kelly Tries and Fails to Use Coronavirus To Get Out of Jail →