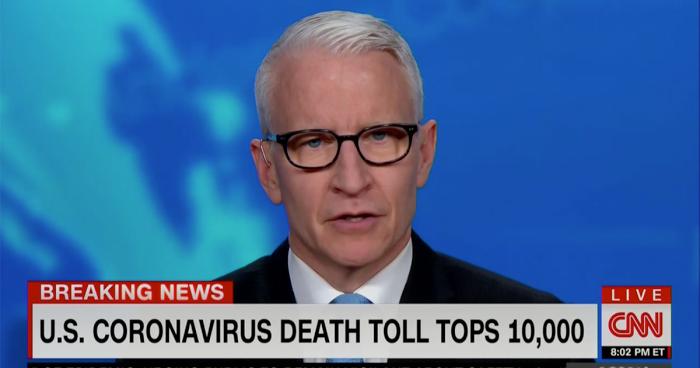 Livid CNN Anchors Are Done with the President

There are two things that I rarely watch these days, and that is cable news and the White House Task Force briefings, and that is because both are often fairly useless. Last night, however, CNN anchors Anderson Cooper and Don Lemon separately unloaded on the President for hijacking these press conferences and using them, not to provide information from medical experts, but to rewrite the narrative and campaign for reelection. The only thing that Donald Trump cares about — has ever cared about — is maintaining power. Anderson Cooper is sick of it.

“If you tuned into the [press conference] hoping to hear from the country’s top scientists, you were likely disappointed. What we mostly heard was the President. What we saw was a hijacking. A hijacking of the task force press conference by a President who was determined to rewrite the history of his early and reprehensible irresponsible response to this virus … the President now uses these news briefings as a reelection platform, an opportunity to lie, to deflect, to attack, to bully, and cover up his own deadly dismissals of the virus for weeks … this is not normal, and it matters, because this is life or death.”

Meanwhile, Don Lemon also took issue with Trump for hijacking the briefings, but he highlighted how Trump has used the news conference to bully journalists who ask questions he doesn’t like, why are hospitals still suffering from severe shortages? Trump attacked two journalists last night for quoting the report of an Inspector General appointed by him because she also worked under the Obama Administration.

“Americans are mad as hell. How much more can Americans take?” Don Lemon asked, channeling Howard Beale. “Every single day, he berates people and lies. First it’s a hoax, and then ‘All along I knew it was serious. I knew it was a pandemic.’ How much more? How many people have to die?”

He’s 100% insane, and nobody in the administration has the balls to tell him that. https://t.co/SlS06oYaoq

The right will claim that Jake Tapper, Anderson Cooper, Don Lemon and CNN are being biased, anti-Trump journalists. It’s not true. They’re speaking facts. Fact are impartial, but the truth is decidedly anti-Trump.

Anyway, here’s Curt Smith of Tears for Fears singing the anthem of this era with his daughter. You’re welcome.


← Our Sincerest Condolences, Michael Che | The Insane Plan Major League Baseball Is Considering In Order to Restart Next Month →