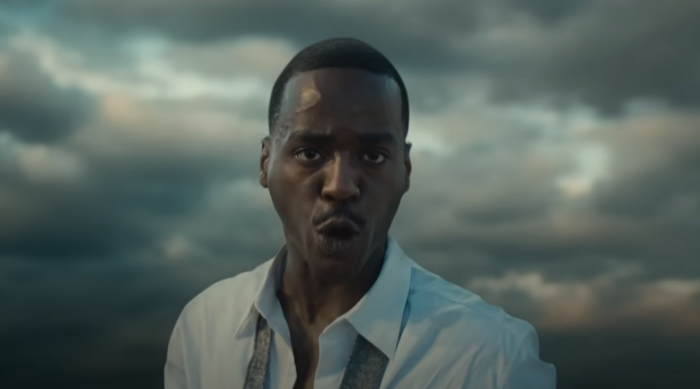 When Will We Actually See Ncuti Gatwa as the Doctor in 'Doctor Who'?

Like a lot of folks, I sort of slipped off the Doctor Who train during the last few seasons because, for all the frustrations that Steven Moffat brought to the series, the Chris Chibnall era has been unfortunately dull. It’s a shame, too, because Jodie Whittaker has been a fantastic Doctor, otherwise wasted and often overwhelmed by too many companions.

I fell behind in series 12 but forced myself to catch up ahead of series 13, but then fell behind again, but caught up ahead of the specials. I still haven’t gotten around to the 2022 specials so I did not see Whittaker end her run along with the rest of the world in October. Therefore, I did not realize until the new Doctor Who trailer arrived this week promoting the 60th Anniversary specials that Whittaker’s Doctor was not replaced — by Spoilers —
.
.
.
.
.
.
… the incoming Doctor, Ncuti Gatwa, but by David Tennant, the 10th Doctor.

Only David Tennant will now play the 10th Doctor and the 14th Doctor, as he is set to appear in the three 60th Anniversary Specials in November 2023 along with Catherine Tate, who will reprise her Donna Noble character. They’ll appear opposite Neil Patrick Harris, who will play the “biggest villain” the Doctor has ever faced (I’m assuming The Master):

If Tennant is returning — along with the show’s best showrunner, Russell T. Davies — as the 14th Doctor, when will Ncuti Gatwa appear as the 15th Doctor? That’s not entirely clear, although he does appear in the 60th Anniversary trailer, as does Yasmin Finney — who will play the mysterious “Rose.” The 14th season, the first full one with Gatwa, is expected to begin during the “festive period” in 2023 (so, a Christmas or New Year’s Special) and be followed by the rest of the season sometime in 2024. Gatwa’s casting was announced in May 2022, so it’s likely to be around two years before he will appear onscreen full-time as the Doctor. That’s insane, but it’s also Doctor Time, which means that the weeks and months will somehow disappear before our very eyes.

Doctor Who will return in October 2023, now on Disney+ in the United States.