What the Hell Was That, 'This Is Us'?

In its first episode back since the break, This is Us delivered a pretty solid, all-around This Is Us episode. Kevin, who we now know will be engaged to a woman who will be pregnant (presumably with Kevin’s child) by his 40th birthday begins his search for his fianceé. The dating apps do not work, but when he catches the eye of a woman, Lizzy, played by Sophia Bush, in a coffee shop, Kevin thinks he may have found his perfect love story.

Kevin and Lizzy do, in fact, hit it off, and with Lizzy going back to Chicago the next day, Kevin decides to go full-court press and woo the hell out of Lizzy, going so far as to bring her to the Hollywood Bowl for a private concert with John Legend, which was too much, Kevin. Before Kevin can kiss Lizzy, however, she reveals why she kept looking at her phone all day. She wasn’t texting her mother, as she’d told Kevin. She was texting her husband. Kevin is a hall pass, and in the end, she can’t bring herself to go through with it. Ooof.

It’s cool, though, because by the end of the episode, Kevin’s getting a call from his first wife, Sophie, who probably is his soul mate. (This presumably also means that we won’t be seeing Sophia Bush again, although I am very curious about the role that Pamela Adlon will play in the back half of this season — I am guessing, based on the previews, that she will play Randall’s therapist).

Meanwhile, over in Kate’s world, she’s still fuming over the text message Toby received from a woman at his gym, and when she confronts Toby about it, he convinces her it was nothing. However, a few weeks later, when Kate throws a party for Toby with his work-out friends, she finds out that Toby had switched gyms, because (Bill Clinton voice) “that woman” tried to make out with Toby, and Toby begged off. But none of that is the reason why there’s been tension between Toby and Kate. The real reason is that Toby is depressed because their baby is blind, and he’s been avoiding both Kate and the baby. However, at the end of the episode, when baby Jack responds to light, Toby seems to light up himself.

That said, Kate and Toby are totally not going to make it.

I feel like they are determined to kill us with the Rebecca storyline. On the one hand, in flashbacks, we see her big, amazing love story with Jack play out in the 1980s, while in the present day, we see what is likely the beginning of Alzheimer’s. It’s far more affecting, frankly, than I want in an episode of This Is Us, but it does really hammer home the ravages of Alzheimer’s and puts into context the value of memory. Here’s Rebecca in the present day clinging to memories of Jack, to memories of spending mornings rocking in a chair with baby Randall knowing that these memories — the foundations of our very lives — could be slipping away. To see it potentially play out for what may be the remaining seasons of This Is Us is going to be very painful.

Finally, the episode ended in what was, all things considered, a cheap trick. Randall flew across the country to take his mother to the doctor for a consultation, and when he returned to Los Angeles, it was night. He checked in on his daughters, kissed his wife, and went back downstairs for a drink of water. This is what he found: 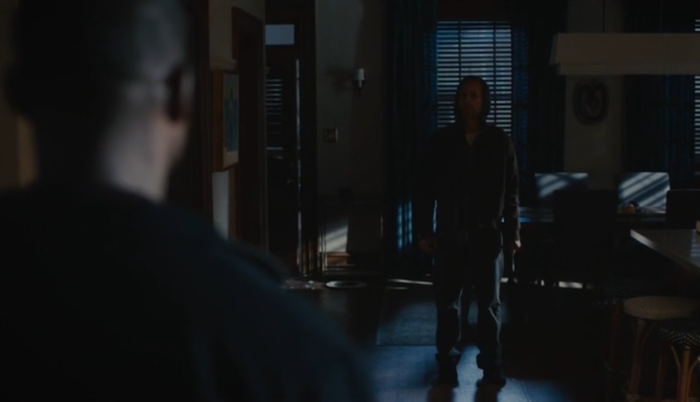 The hell was that? Presumably, it’s a home intruder, but that shot is all we get before the episode abruptly ends. I rewound two, three times to make sure I didn’t miss anything. Then I checked Hulu this morning to make sure it was the same. It was. That’s it. That’s all we get. A cheap scare to set up next week’s episode. I got no problem with the storyline — an apparent three-parter that will tackle Randall’s fears and insecurities — I just think that introducing it this way was cheap.

Anyway, here’s the preview for next week’s episode.

← Where Have You Seen the Stars of Amazon's 'Lord of the Rings' Series Before? | Eddie Murphy Didn't Get Fired at 'SNL' Because He Ate Dog Food →