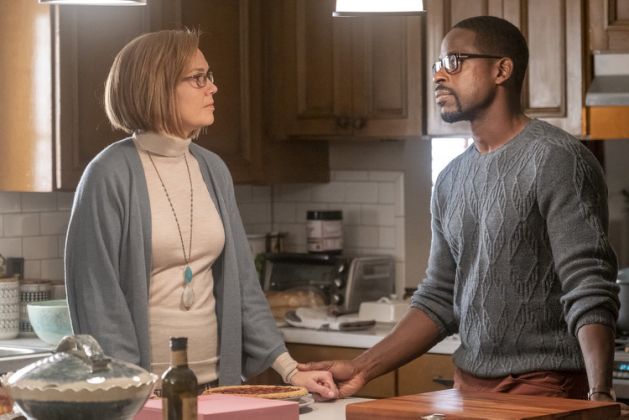 This week’s episode of This Is Us was the winter finale, so let’s just cut to the chase here: The end of the episode jumped ahead nine months to the 40th birthday of the Pearson siblings, i.e., the events what will ultimately take place in full on the fifth season premiere. It’s their 40th birthday. Kate and Kevin are at the Pearson cabin, along with Rebecca and (Saint) Miguel.

Here’s what we know: On his 40th birthday, Kevin will be engaged and his wife will be pregnant. We have no idea who he is engaged to. Randall and Kevin are no longer on speaking terms. The absence of Toby suggests that Toby and Kate may be on the outs — and in the present, Kate finds a text to Toby from another woman — but Kate is still wearing her wedding ring, so they are not yet divorced.

Rebecca will be suffering from the same memory loss that has started to avail itself in the present. We can conclude that Rebecca has Alzheimer’s, or something similar. However, thanks to flash-forwards in other episodes, we know that Rebecca will survive another 12 years, which in and of itself is kind of heartbreaking because we know that from now on in the present timeline, Rebecca will be suffering from memory loss. In a show that’s so often about memories of Jack and Rebecca’s past, this will be devastating.

Now, let’s back up to the present timeline, where the family is getting together for Thanksgiving. Here, Kevin encourages Tess to come out to her school on social media, and when she does so (by admitting to a crush on Zendaya), it is well received. Deja’s mom pays a visit, and she is doing very well, much to the consternation of both Beth (who is afraid she will attract Deja’s attention away from her) and Deja (who is upset that her mom couldn’t clean up her act for her). Toby and Kate are having relationship difficulties because Kate hates Crossfit Toby because Crossfit Toby is annoying. Kate also finds a text on Toby’s phone from a woman that says, “Don’t let her bring you down. Here for you.” If they divorce over weight issues, I will be furious, because goddamnit, give Kate another defining characteristic.

Meanwhile, Uncle Nicky introduces a new Thanksgiving tradition — 5 pounds of shrimp — based on a Thanksgiving tradition that he and Jack once tried to get started before it was interrupted by the war. Nicky also tells Kevin that he’s squared away now and that Kevin needs to get back to his life in Los Angeles. Kevin, meanwhile, tells Randall that he’s ready for the simple life now, that he wants a wife and kid by the time he’s 40. As we see in the flash-forward, he’s well on his way to fulfilling that promise.

Outstanding Questions? Who is Kevin engaged to? Why aren’t he and Randall speaking? Are Toby and Kate divorcing? Those are the questions that the back half of the season will answer, while it will also deal significantly with the abusive boyfriend of Kate’s past, as well as Rebecca’s memory loss.

← The tl;dr on the Gordon Sondland Impeachment Hearings | Everything Else You Need To Know About 'Nailed It! Holiday!' Season 2 →