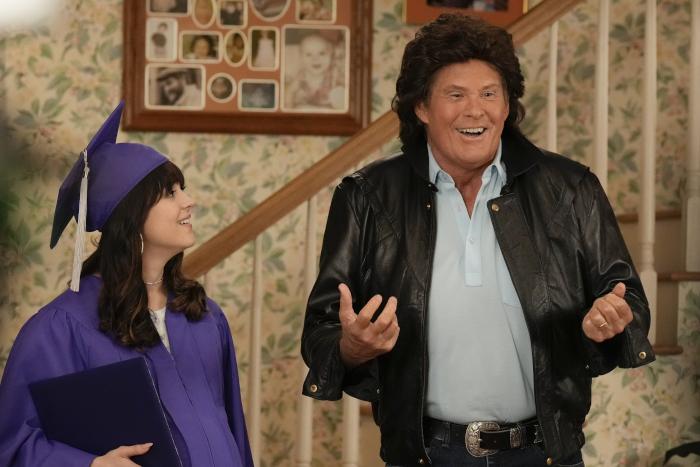 What the Hell Happened to 'The Goldbergs'?

Because I couldn’t otherwise get through a week without it, here’s another of my quibbles with the logic of a 10-year-old family sitcom that has long overstayed its welcome. Hello, and thanks for reading! Reminder: In the first few episodes of the 10th season, Beverly has demonstrated what a horrible mother she is by letting her son skip college while encouraging his girlfriend to return, and wrote out the father with almost as little fanfare as Kevin Can Wait wrote out the wife.

In this week’s episode, Erica is about four more months pregnant than she was last week and she has somehow managed to graduate early from college. How long did she actually attend college before graduating? That’s unclear on a sitcom where it has been “1980-something” for a decade now. I did, however, appreciate that her diploma contained a typo, referring to her as “Eric Goldberg,” which is the name of the real-life Adam Goldberg brother upon whom Erica is (very loosely) based.

While it’s not clear how long Erica attended college, what is clear is that both her husband, Jeff, and her brother, Barry, began college after she did, and yet there is no evidence whatsoever at the moment that they continue to attend college. In fact, Erica and Jeff now live at home with Erica’s mother, Beverly, and Barry — who is also apparently in college — has nevertheless moved back home and lives in the same childhood bedroom with his college-aged brother, Adam. Apparently, killing off Murray allowed the sitcom to completely reset and pretend as though it was totally normal for the entire family to live at home where no one has a job anymore. I believe we know from Schooled, the short-lived ’90s spin-off of The Goldbergs that both Jeff and Barry become doctors. How did they accomplish this by never attending college?

Meanwhile, Adam — on a gap year — has already been fired from his job as a personal assistant on a David Hasselhoff project that decided to move its production from Jenkintown, PA back to Los Angeles, which makes no sense because the only major project Hasselhoff was involved in during the ’80s was Knight Rider, which I’m positive never shot in Pennsylvania.

In either case, it did give Hasselhoff another chance to appear and scare the bejesus out of little children watching.

I’ve been patient and loyal, but 70-year-old David Hasselhoff portraying 30-something David Hasselhoff wearing the first wig the crew could find at the Spirit Halloween Store may be my last straw with The Goldbergs. pic.twitter.com/bF0C2HCJu1

The B-plot was about who would become “the man of the house” now that Murray is gone, a competition that apparently came down to who — between Barry and Adam — could fetch ice from a convenience store first. Adam won, but it ultimately didn’t matter because Adam — using Hasselhoff as a proxy — gave a speech to Barry about what a fantastic big brother he is.

This scene had us like 🤣🤣🤣 Stream last night's episode of #TheGoldbergs on Hulu now! pic.twitter.com/Slbt7cUnHs

Thank you for indulging me for another edition of, “What the hell happened to ‘The Goldbergs’?”