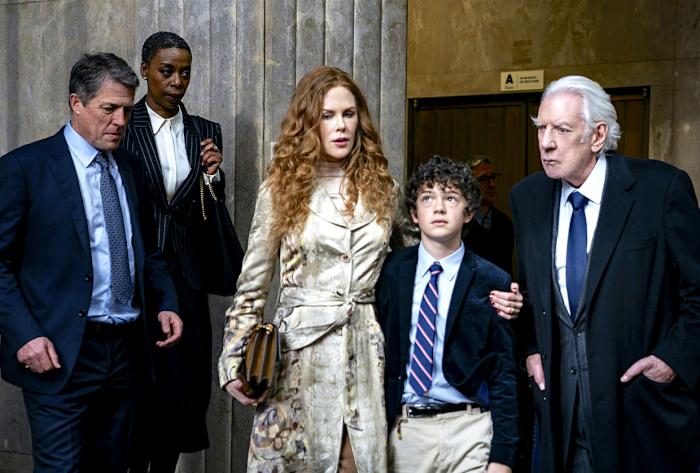 What the Ending of HBO's 'The Undoing' Says About Us

As soon as the finale of The Undoing ended last night, I did what many of you probably did. I looked up the ending of the novel upon which the HBO series is based, You Should Have Known by Jean Hanff Korelitz. It’s interesting the way David E. Kelley transformed the novel into the series — the book is set at the beach house, where Grace and Henry live, and most of the events we witness in the series are flashbacks to many of the events we see in The Undoing. In the novel, there’s never a question about the guilt of Hugh Grant’s character, and his time in the book is spent on the run (he’s captured in the final pages). There’s no trial in the novel, either, nor is there a mystery. It was Jonathan all along.

It’s interesting — though Jonathan was the most obvious murderer — that we, the audience, turned The Undoing into a mystery. I’m as guilty as anyone, obviously, because I wrote weekly installments of our Suspect Watch, where we assumed from the outset that the odds that Jonathan was the killer were low. Why? Because he was the most obvious suspect, and we have been so conditioned by mystery thrillers and true crime documentaries to rule out the obvious (in point of fact, in reality, Fernando was probably the most obvious suspect because — as Sylvia noted in the pilot — “it’s always the husband,” which is true more time than not).

What does it say about us that so many of us ruled out Jonathan even as the evidence suggested otherwise? How many of us thought Henry — an adorable kid! — could have been the killer? How many of us spun theories in our minds about Grace killing Elena and framing Jonathan for it? How many thought that Lily Rabe’s character, Sylvia, was the other woman with whom Jonathan had an affair? Why are we so willing to ignore the charming man with the twinkly eyes who hid an affair and a $500,000 loan from his wife and fled the scene of a murder in favor of more remote possibilities?

Obviously, David E. Kelley planted several red herrings to lead us toward alternative explanations — the hammer found in Henry’s violin case; Grace’s flashbacks of Elena and the fact that she was near the scene of the crime; casting Donald Sutherland as the father; inserting Sylvia into each episode just enough to remind us that she’s there — but why were we all so willing to follow those weak threads away from the obvious?

This is how conspiracy theories start, isn’t it? We ignore what is in front of our damn faces and instead manufacture less obvious possibilities. Reddit and Mad Men and Damon Lindelof and True Detective and Donald Trump have really done a number on all of us, haven’t they?

Indeed, the twist in The Undoing is that there isn’t a twist. The guy who had the motive, means, and opportunity; the guy who lied repeatedly to his wife; the guy who ran away from the scene; the guy who exhibited the traits of a sociopath was … twist … a sociopathic murderer! But before you beat yourself up too badly for not noticing our nose despite our face (to mangle an idiom beyond recognition), recall that Grace had the same instinct to believe that Jonathan was innocent. And so did Henry. And maybe that was the point: We were witnessing Jonathan’s actions through the biased eyes of his wife and child (and 30 years of romcoms, where Grant always plays the cad, but never the killer), and so maybe we were supposed to give him the benefit of the doubt despite all the evidence telling us to do otherwise.

At least Grace came to her senses in the end, once she realized that — not only was Jonathan guilty as hell — but that escaping prison would mean that Jonathan would remain in Henry’s life forever. That, as Franklin Reinhardt stressed, is obviously not ideal. And so Grace hatched a plan to feed Sylvia some information about Jonathan to the prosecution, and the prosecutor would use that information against Grace on the stand. It’s a very David E. Kelley ha! moment, only in one of his dramas, Jonathan would have been escorted away in handcuffs yelling at Grace for selling him out (the actual ending, with the manhunt, was likely a nod to the source material).

And there we are: The Undoing is done, and after six episodes, it’s exactly what we suggested it was at the outset: Not a great television show, but perfect for this moment: High-brow trash that allowed us the occasional escape from the menaces of reality. It was great escapism.

— Listen, David E. Kelley: We want a spin-off legal drama centered on Noma Dumezwent’s character, Haley Fitzgerald. How f**king good was she? And how perfect was her disgust with Jonathan? “She was in your camp. And you lost her. Because you kept. The fucking. Hammer. You kept the hammer. How stupid can you be?” Forget Hugh Grant’s crinkly eyes and Nicole Kidman’s dewy stare. If anyone, Dumezwent should get the Emmy nod for this show.

— The courtroom scenes, by the way, were entertaining, but completely unrealistic. But then again, Kelley — who has a law degree — has always been more interested in drama than in verisimilitude. If you want realistic courtroom scenes, watch … well, nothing, but at least the OG Law & Order cites real caselaw.

— I don’t feel that bad about thinking Henry could have killed Elena, but I do feel guilty for throwing Sylvia under the bus. But Kelley cast Lily Rabe! It was the perfect misdirection. When has Lily Rabe ever played the loyal, supportive friend with no ulterior motive? How were we supposed to know?! We were hoodwinked!