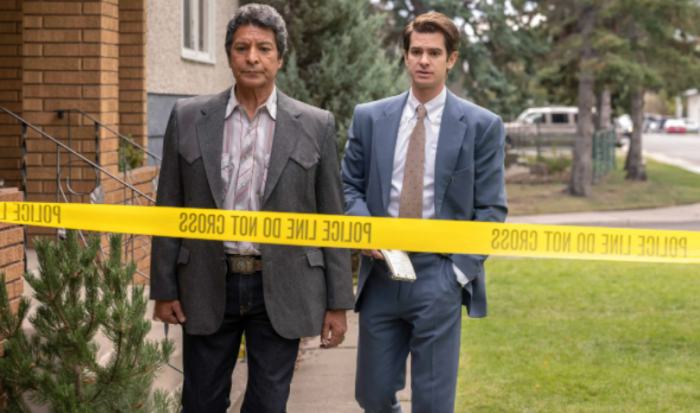 'Under the Banner of Heaven' on FX Is an Engrossing, Eye-Opening Murder Drama

I live in an old farmhouse that was built in 1842, and it boggles my mind to think that Mormonism has only existed for a few more years than my house. It has taken hundreds if not thousands of years for humanity to normalize small cults and turn them into worldwide religions, but it took less than 200 years for 14 million believers to buy into a religion that is, honestly, really out there. I thought I had a fairly basic understanding of Mormonism until I read Jon Krakauer’s eye-opening Under the Banner of Heaven a few months back, but I was shocked by how far the religion has come in such a short period of time.

It’s a wild religion marked by a lot of bloodshed inflicted both upon Mormons and by Mormons. Most of us are familiar with the temple undergarments and plural marriage — discussed extensively in Krakauer’s Under the Banner of Heaven — but there’s also, for instance, a practice called Baptism of the Dead, in which members can baptize anyone with whom they have even a tangential connection on their family tree. You can imagine how upset the Jewish community was when the Mormons started baptizing deceased victims of the Holocaust. There are also a number of cultish rituals in the evangelical sects that might fit right in on an episode of True Detective.

Krakauer’s book investigates the brutal murders of Brenda Lafferty and her infant daughter Erica in 1984. The murderers are identified in the first chapter before Krakauer does a deep dive into the history of Mormonism to explain how the beliefs of the murderers influenced their acts. Many of their beliefs date all the way back to Joseph Smith and Brigham Young. While the LDS Church (which rejects polygamy) is the mainstream branch of Mormonism today, some Morman evangelicals still apply the teachings of Smith and Young in a literal sense today. That not only entails large families where the wives are subjected to the rule of their husbands but also rejecting governmental authority, like taxes and fines. The family of Tara Westover as described in her memoir Educated belonged to a similar fundamentalist branch, which is a close cousin to those involved in the kidnapping of Elizabeth Smart and a more distant cousin to the men involved in Ruby Ridge.

I am reluctant to identify the murderers here so as not to spoil FX’s adaptation of Krakauer’s book, although it’s fairly obvious early on who is involved. The series comes from Dustin Lance Black — who has some experience in this area, having written for HBO’s Big Love (as well as winning an Oscar for writing Milk) — and he adapts the book in both expected and unexpected ways. There is no mystery in Krakauer’s book, and little by way of a police investigation, but the series turns it into a police drama that excavates the history of both the Lafferty family and Mormonism itself largely through interrogations of the various suspects.

Andrew Garfield plays Detective Jeb Pyre, the lead detective on the case as well as a devout Mormon. The investigation, however, forces Pyre to wrestle with his faith as he has to contend with some of the darker elements of Mormonism from the past that bubble up during the investigation. He also struggles to square modern-day Mormonism with how he treats his wife (Adelaide Clemens) and daughter, as well as his mother, who is suffering from dementia. He quickly learns that the Church is not equipped to help him. Church leaders bury the religion’s dark history and are unwilling to stray from conservative, conventional thinking when it comes to managing modern domestic life.

Garfield is exactly as good as he always is: He is a believable sensitive man of faith, and just as impressive when he begins to interrogate those beliefs. It’s a series about a deranged Mormon sect, so obviously it provides a lot of opportunities for white dudes to show their range, and boy do they: Wyatt Russell — so likable and goofy in Lodge 49 — has taken the temperamental side of his Captain America character and turned the knob to 50 — he is a crazed Koresh-like figure. Because the best prestige dramas need a Culkin, Rory comes along here as some kind of feral Mormon Pioneer man; Christopher Heyerdahl is all kinds of terrifying as the Lafferty patriarch; and Sam Worthington is in this, too. I’m pretty sure he’s even a major character, but as you all know, whenever he comes on screen, his charisma vacuum tends to cause blackouts so I haven’t been able to appreciate his character. Daisy Edgar-Jones plays Brenda Lafferty, the deceased, who in flashbacks rebels against the Lafferty family by, for instance, daring to embark upon a career, or “fornicating,” as defined by the Lafferty men not as cheating on your spouse but as a woman who doesn’t listen to the family elders.

Of course, they’re all outshined by Gil Birmingham, who plays Bill Taba, a veteran detective who recently relocated from Las Vegas and doesn’t buy into any of the Mormon evangelical bullshit and can barely contain his profanity in front of Pyre. He is both a very good dramatic actor here and often the comic relief.

Under the Banner of Heaven is a solid murder drama, particularly for fans of True Detective or true crime, or for those who have an interest in Mormonism and cults. It’s a bleak series, but Garfield brings some light and thoughtfulness to it while subverting the toxic masculine tropes we often associate with these shows, all the more ironic given his character’s place in a patriarchal religion. It’s a fine adaptation, and a fascinating exploration of a religion that has existed only 75 years longer than the state of Utah (Congress, interestingly, refused to grant statehood to Utah for 40 years, until 1890 when the state finally outlawed polygamy).

FX’s Under the Banner of Heaven airs weekly on Hulu.

← 'The Shining Girls' Is a Very Good Show with an Unfortunate Elizabeth Moss Problem | 'Doctor Strange in the Multiverse of Madness' Is Exhilarating, Terrifying, and Littered with Issues →