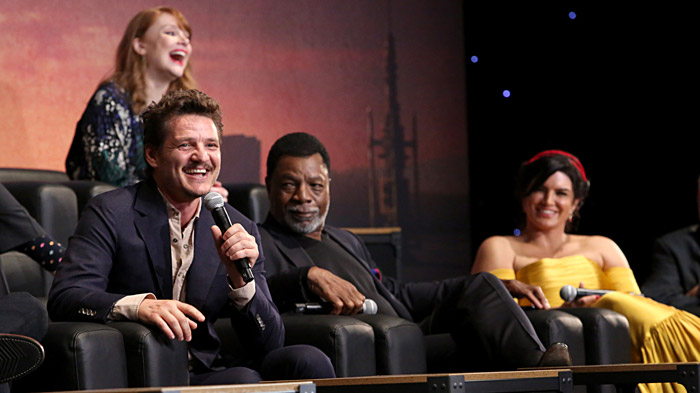 Twitter Reacts To Gina Carano Getting Fired From 'The Mandalorian'

For months, we’ve been reporting on the atrocious behavior of Gina Carano online. The Mandalorian actress used her Twitter account to promote voter fraud propaganda, conspiracy theories, transphobia, and then used Instagram stories to suggest being a MAGA supporter was like being Jewish in Nazi Germany. #FireGinaCarano was recurringly trending on Twitter, because many Star Wars fans who aren’t trash monsters were appalled by Carano’s bigotry and ignorance, and wondered how much more Disney and Lucasfilm would allow her to taint their brands. Well, she was finally canned yesterday. And here’s how Twitter reacted.*

I dozed off and pic.twitter.com/cy1cKi1WN3

Good job #DisneyPlus for canceling #GinaCarano! Best decision you could have made! #ginacaranoisoverparty Proud of you, Disney!

“According to sources, Lucasfilm planned to unveil C****o as the star of her own D****y+ series during a December investor's day presentation but scrapped those plans following her November tweets.”

Some leaped to recasting the role of Cara Dune.

I am a little sad that we no longer have the opportunity to re-shoot #GinaCarano’s scenes with Christopher Plummer. #StarWars #TheMandalorian pic.twitter.com/4ZnDdlvV67

#GinaCarano you know would be cool if they recast Cara Dune with Michelle Rodriguez pic.twitter.com/ULD0tAiOfc

Lana Parrilla for Cara Dune! Nobody will even notice! Except the acting will get better! pic.twitter.com/SaB7AFzkcV

Hola Lucasfilm it is me Carina Duna. I am thicc and buff and not awful. gracias pic.twitter.com/neVbxnXM4j

Others suggested a more final exit.

Can someone tell #GinaCarano to google Roseanne?

*Note: Yes, there are also MAGA morons yammering about freedom of speech and idly threatening to cancel their Disney+ subscriptions. But we’re not about to spread misinformation about that concept here.

This has nothing to do with freedom of speech. Carano is free to say whatever she wants. She’s not been arrested. The government has not silenced Carano. Hell, not even Twitter or Instagram has shut down her accounts. However, freedom from speech does not mean freedom from consequences. She’s been fired presumably because she was drawing a lot of bad attention to herself, and thereby The Mandalorian. Her canning was the consequence of her own actions, not because Disney and Lucas Films are bastions of liberal ideals but because they are companies that want to sell Baby Yoda toys without the distraction/drama Carano’s bilious rants bring.

This isn’t about Freedom of Speech, it’s about the Free Market. Conservatives supposedly LOVE the Free Market, but MAGA folk are still mad. They’re declaring Carano a martyr of “cancel culture.” Because of that, she’ll likely get cast in some low-budget MESSAGE movie that’ll look like trash and be ignored. Thus, she will become a distant memory, a bit of cringe-worthy Star Wars trivia.

Or, as Yvette Nicole Brown put it: Carano just made herself a has-been.

I heard #AntonioSabatojr #DeanCain & the “artist”formerly known as Chachi are filming a movie with Kev Sorbo and #KarenSwanson (y’know the lesser Buffy… her name is Karen, right?). I’m sure #GinaCarano would be welcome addition to THAT cast. https://t.co/tfiTXgaGS3