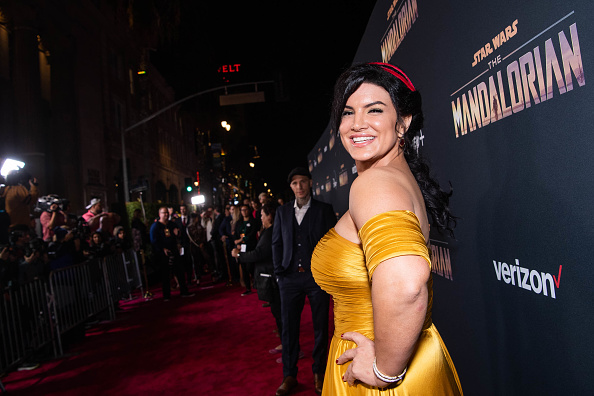 UPDATED: Gina Carano Is No Longer Working on 'The Mandalorian'

Updated — According to a statement from Lucasfilm obtained by I09, Carano is no longer involved with The Mandalorian or ay other Star Wars project:

“Gina Carano is not currently employed by Lucasfilm and there are no plans for her to be in the future. Nevertheless, her social media posts denigrating people based on their cultural and religious identities are abhorrent and unacceptable.”

Gina Carano has not exactly endeared herself to fans of Disney+’s The Mandalorian after revealing herself to be a far-right, transphobic conspiracy theorist who believes that COVID is a political hoax.

Still, Disney+ has not fired her from The Mandalorian, likely out of concern that they’d play into conservatives’ cancel-culture fears and elicit a Republican backlash. On the other hand, on the day after Carano’s co-star Pedro Pascal came out in support of his trans sister, how can Disney continue to employ Carano? At what point will they finally draw the line?

Yo. @starwars I love this franchise. I love how actors and creators of these stories engage the fandom. I love how fans can interact like never before, it's why this podcast/network exists. But this has to end. #FireGinaCarano pic.twitter.com/nFFQsWWgZm

It really feels like Carano is challenging Disney+ to fire her, or that she knows that it’s already in the making and wants to launch as many heinous opinions as possible before she’s reduced to co-starring in straight-to-Redbox Kevin Sorbo films.

It's DESPICABLE that Gina Carano is comparing being a Republican to being a Jewish person during the Holocaust, and it's INFURIATING that she will see #FireGinaCarano as proving her point. That woman is a disease. And while it's far from the point… she cannot act.

Honestly, Jon Favreau: How can you continue to look the other way as this continues? It’s time. It’s well past time. And if she feels comfortable enough to make this comparison, it’s obviously not going to stop.

Yo, @Disney / @Jon_Favreau — it is time to do the right thing and #FireGinaCarano . She’s made NUMEROUS anti-Semitic comments in the past, and now she’s comparing having different political views to being Jewish during the Holocaust. NO. pic.twitter.com/aj2n2DUdup

One day we get a beautiful story about Pedro Pascal and his goodness and support for inclusivity, and the next we’re reminded that Gina Carano has a lizard brain and should not be trusted around human beings. #FireGinaCarano

It's not cancel culture, it's called accountability #FireGinaCarano

Fire her. Replace her with Lucy Lawless. Or Sasha Banks. Or a poop emoji. It doesn’t matter. These aren’t differences of political opinion. This is drawing comparisons between people who stormed the Capitol in an attempt to violently overthrow an election to six million people who were victims of genocide. How does that, in any way, square with the Disney brand?