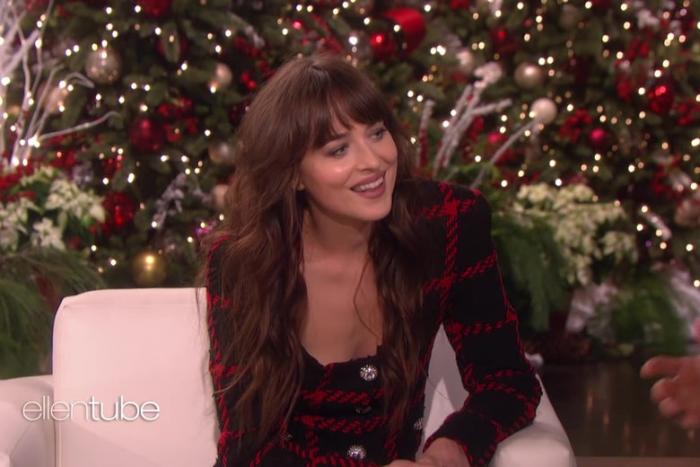 Oh, Ellen. We’ve talked before about how stand-up comedian Ellen DeGeneres has turned her feel-good talk show into a parade of mean-spirited bits and cringe-inducing apologism. Just this year, she gave Kevin Hart a pass for his history of homophobia, defended befriending warmonger George W. Bush, and mocked young women because “Millenials,” amirite? But DeGeneres misstepped when she tried to mess with Millennial actress Dakota Johnson, who didn’t play along when the talk show host tried to shame her over a birthday party invite.

Johnson is an actress who has taken major risks in her career, fronting the controversial Fifty Shades trilogy, throwing herself into mind-bending and stomach-churning horror films like Suspiria and Wounds. She’s the daughter of Don Johnson and Melanie Griffith, so has a childhood studded with stars and surely fascinating stories. She’s there to promote her latest release, The Peanut Butter Falcon, a warm-hearted story about a young man with Down syndrome who chases his dream on a thrilling quest. Yet how does DeGeneres decide to kick off this segment: Happy birthday—why wasn’t I invited to your party?

With a smile and poise that has made many on Twitter call out stan status, Johnson responded “Actually, no. That’s not the truth, Ellen.”

The newly minted 30-year-old movie star did invite the 61-year-old daytime TV host to her birthday. DeGeneres just didn’t come. And that’s not all. Johnson noted, “Last time, last year I was on the show, and you gave me a bunch of sh*t for not inviting you. But I didn’t even know you wanted to be invited…I didn’t even know you liked me.”

DeGeneres tries to defend herself, insisting Johnson is wrong and she was definitely snubbed. Johnson answers, “Ask everybody. Ask Jonathan your producer.” DeGeneres wonders aloud, “Why didn’t I go?” She’s told she was out of town. And yeah. She was in Dallas for the Cowboys football game, where she chummed it up with George W. Bush.

actually no, that's not the truth ellen, you were invited. ask jonathan, your producer pic.twitter.com/3aGpjbzlr7

dakota johnson getting annoyed on ellen: a saga pic.twitter.com/SNsWB4yxjT

Dakota Johnson is a gift that will continue to give both onscreen and off, and you should know this down to your bones.

Dakota Johnson’s grandmother had a pet lion of course she’s not scared of Ellen she comes from a line of fearless women who don’t play by the rules pic.twitter.com/QXhP73Bs93

Knowing that Ellen missed Dakota Johnson’s 30th birthday to hang with her good buddy George Bush really is the icing on the cake.

Dakota hasn't started enough wars for Ellen to consider her a friend https://t.co/OUWWJELWM3

every tongue that rises up against dakota johnson shall fall! https://t.co/LyYalygrUW

Gonna tell my kids this was Frost/Nixon pic.twitter.com/07RQC5FS7b

The second half of the interview also had Johnson stans gleeful, as she subtly shades DeGeneres by talking about Tig Nataro, her “favorite comedian,” who no only came to the party, but also performed.

Y’all aren’t talking enough about the second part of this interview, where Dakota Johnson makes it clear she wants Ellen DEAD.

Dakota: “She’s my favorite comedian……. other than you.” pic.twitter.com/YatBNM05Tt

Last night, Johnson and Notaro reunited at Largo in Los Angeles. No word on where DeGeneres was or with what sneer-worthy celeb she was hanging.

Fans also pointed out the time Johnson shaded clown Jimmy Fallon on his own show.

everyone’s talking about dakota/ellen degeneres but never forget when she called out jimmy fallon for not letting her speak ahksjsd pic.twitter.com/KM222imz4H

Who do you want to see Johnson take down next? How about Shane Gillis defender David Spade?

The Peanut Butter Falcon is now available on home video and digital.