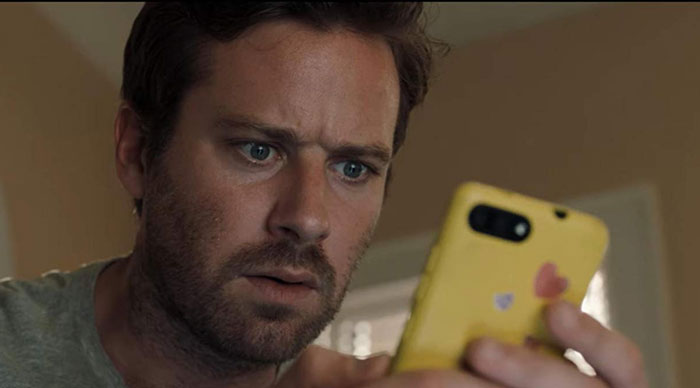 Review: 'Wounds' Offers Some Interesting Subtext, But What About Scares?

In 2016, British-Iranian filmmaker Babak Anvari broke onto the horror scene with his critically heralded directorial debut Under The Shadow. Now, he’s back with his star-studded, English-language debut Wounds. And if you’re searching for something sick and twisted to get you in the Halloween spirit, you could do worse…and better. Frankly, you could do much better.

Written and directed by Anvari, Wounds made its World Premiere earlier this year at the Sundance Film Festival, then played in part of the coveted Cannes Directors’ Fortnight. Then, it was dropped straight to Hulu, which might seem a red flag for his sophomore effort. Another: where Under The Shadow boasts a 99% on Rotten Tomatoes, Wounds is currently ranked rotten at 57%. But hey, its trailer boasts mind-bending menace and creepy cockroaches! How bad could it be?

Wounds centers on Will, a New Orleans bartender with smarts, charm, and the looks of Armie Hammer. He oversees his shift at Rosie’s with a warm grin, an easy banter, and an earnest empathy for his customers. He’s patient with the nebbish new beau of his favorite regular Alicia (Zazie Beetz in another thankless role). He gamely serves a batch of underage college kids, admittedly with a smug smile. And when a gruff bruiser named Eric (Brad William Henke) kicks off a brawl, Will tries his best to de-escalate things before calling the cops in. But all this brings him is trouble in the form of a bright yellow cellphone left behind in the fray.

Texts come to the phone in the middle of the night, pleading for help. When Will looks for clues to the phone’s owner, he discovers disturbing photos depicting gruesome violence and a brief video that’s skin-crawlingly terrifying. His girlfriend Carrie (Dakota Johnson) also peruses the perturbing pics, and urges him to go to the cops. But it’s too late. The couple has been infected by the things they’ve seen, putting them on a path of destruction and doom.

At first blush, it might seem Wounds is the kind of nihilistic horror that’s premise is “good things happen to bad people.” But as we spend more time with Will, we begin to see he’s not such a good guy. There’s a hint of resentment when he talks to a college student, sneering that he himself is a college dropout. There’s an edge to the way he speaks to Alicia, part flirtation and part threat. And when Carrie clamors to know more about the phone, we know why. Will has cheated before. Even his concern for Eric proves hollow. And in all of this we begin to see there are wounds beyond the one inflicted in a bar fight or the strange patch of ache that’s swelling under Will’s arm. There’s the wound to his ego that is slowly swallowing him whole, pulling him to compensate with selfish and reckless behavior that wounds those around him. And then on top of all this there’s the cockroach curse brought on by nosing into the cellphones of cultists.

If you scratch beneath the surface of this skin-crawling premise, Wounds offers a rich and gruesome vein that darts right to the dark side of the psyche. Unfortunately, the actual scares and suspense within this horror-thriller are far from frightening. Anvari aims for the slow-burn tension of a psychological thriller, punctuating sequences with a splash of gore, like a picture of a dismembered head, the reveal of spreading sore, or crusty cockroaches erupted from flesh. Sure, these bits are gross and unnerving, but they are so stingily employed that much of Wounds just feels boring. And the psychological aspect never really takes root because we’re given no room to doubt Will’s perspective, as his girlfriend suffers too, falling into research rabbit holes that take her into darker portals.

There’s little sense of urgency as Will goes from the furrowed-brow intensity to going on a drunken psuedo-date with his bar-mate. The mystery is murky, the mission meandering. And then the film and its beleaguered protagonist lumber into a climax that finally delivers on scream-worthy spectacle and some curious questions. But with all the speed of a roach racing across a bartop, it just ends. Likely, you’ll be left head-scratching and unsatisfied, and maybe wondering why you didn’t just watch Under the Shadow on Netflix instead.

Wounds is now on Hulu.

← What Happened to Walton Goggins's Uncle Baby Billy on 'The Righteous Gemstones' Finale? | Review: 'Goliath' Season 3 Ending, and Will There Be a Fourth Season? →