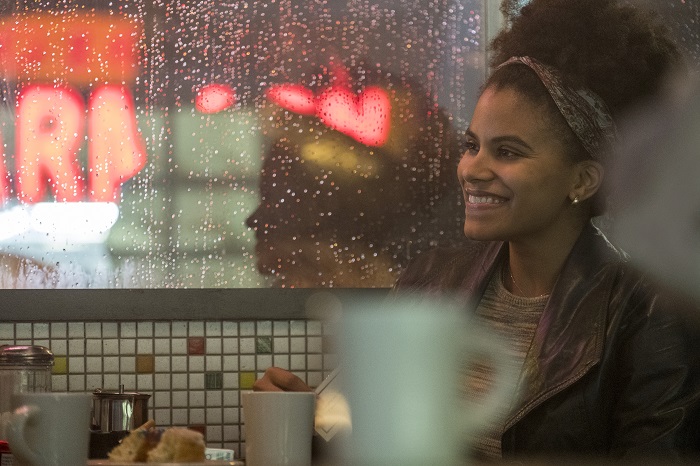 Have you seen Joker yet? If you haven’t, turn back! If you care about spoilers, do not pass go! We are going to get into some nitty-gritty third-act stuff here, so SPOILERS ARE AHEAD.

Todd Phillips’s Joker tracks the mental breakdown of aspiring comedian Arthur Fleck (Joaquin Phoenix), whose daytime job as a clown lines up with his mother’s constant refrain that he should “put on a happy face.” But Arthur is a man surrounded by casual enemies: The kids who beat him up, the social worker who doesn’t understand him, and the other clowns who mock him. One of the only people sympathetic to him is neighbor Sophie Dumond (Zazie Beetz), a single-mom who Arthur meets with her daughter in an elevator. And then, one day after Arthur stalks Sophie, she laughs it off. He invites her to his standup-comedy gig, and they start a relationship. 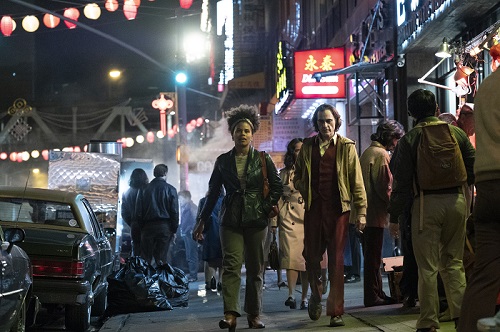 We see an emboldened Arthur, exhilarated from murdering three businessmen who worked for Wayne Enterprises, come to her apartment and kiss her; Sophie’s response is enthusiastic. When Arthur’s mother has a stroke, Sophie is at the hospital to sit by her bedside. And when Arthur, devastated at remembering his mother’s abuse of him as a child, enters Sophie’s apartment, we too realize the truth: Arthur imagined their entire relationship. Fight Club-style flashbacks reveal she was never really there, not on their date, not in the comedy club, not in the hospital. She doesn’t even really know his name. When she finds him on her couch, Sophie says: “What are you doing in here? Your name’s Arthur, right? You live down the hall?”

It makes sense that it was all a fantasy, if you noticed that Sophie’s daughter basically disappears after Arthur meets her. That’s a tip-off that Arthur’s imagining all these scenarios, and purposefully leaving Sophie’s daughter out of them. But Joker leaves one thing very ambiguous: What happens next? He is sitting on her couch, staring at her. She asks him to leave, mentioning that her daughter is sleeping in the next room. She backs away from him. And then the movie cuts to Arthur stalking down the hallway, with the film’s bombastic score accompanying his walk; then we see Arthur in his apartment, sitting in his underwear on the couch, hysterically laughing. We never see Sophie or her daughter again.

So: What happens to Sophie? Did Arthur kill her? This is the question that has Joker’s audience scratching their heads and the Pajiba Slack in intense debate. But honestly, whichever theory you believe, that doesn’t necessarily make Joker any better.

It happens off-camera, but yes. I believe Arthur at least killed Sophie, if not raped and killed her, then maybe murdered her kid too. Admittedly, the film doesn’t give me a lot of hard evidence for this assertion. But it doesn’t seem likely that a Joker finding self-worth through violence would just walk away from that confrontation. He’s already gotten a taste for killing, and is gearing up to kill his mom, his greatest love. So slaughtering his love interest would be a plausible next step.

But my main argument is the other murder Joker chooses to keep off-camera, that of the Arkham psychiatrist in the penultimate scene. We don’t see Joker kill her either. Instead, we see him walk away from their conversation, just as we did with Sophie. But this time his footprints tracking blood. Yes, Joker’s other victims overtly betrayed or abused him, while Sophie didn’t do anything wrong. Even when this creep broke into her home, she seemed more alarmed than angry. But Arthur is coming from a place where he feels his pain means he is owed pleasure, as I discussed in my review. So, in his mind, her simply not being the cool-with-stalking lives-to-validate partner he’s literally imagined would be a betrayal worthy of violent punishment. And it would explain why we never see Sophie again.

But why keep such a kill off-camera? While Roxana and I don’t agree on the scene’s meaning, we do agree on why it’s kept ambiguous. (And also just that Zazie Beetz deserved better.)

The only reason I think that is because the movie is too cowardly to make the narrative choice that he would murder her because then we wouldn’t like Joker. And this movie desperately wants us to like Joker. This movie only has Arthur kill people who he thinks have wronged him: the three bros from Wayne Enterprises who attack him on the train; the rival clown Randall (Glenn Fleshler) who lies about where Arthur got his gun; his mother, who we learn abused him; late-night host Murray Franklin (Robert De Niro), who mocks him; and the Arkham State Hospital psychiatrist who tries to get him to open up at the end of the movie. This all keeps the audience fully on Arthur’s side. And if you saw the movie in the theater, you probably experienced people around you who cheered or clapped when Arthur attacked those people. I certainly had those people in the theater with me on Sunday morning!

This movie doesn’t have the gumption to make Arthur a true villain; it wants to keep him in antihero mode, someone who is only defending himself from the “savages” and “animals” of the world, as he calls them. But Arthur doesn’t only kill. He lets fellow clown Gary (Leigh Gill) escape his apartment after Arthur stabs Randall in the eye and bashes his brains in. He explains that Gary’s kindness didn’t go unnoticed, which shows he doesn’t murder indiscriminately. We’re meant to believe the Joker is insane and unhinged enough to incite a citywide uprising against the rich and powerful and murder a man on live television … but also is relatable and humane enough that he would grant people who were nice to him mercy? OK, then! This is a movie uninterested in committing fully to the depraved story it’s pretending to tell. So, I don’t think Arthur killed Sophie. The murder of a fully innocent person would be too much evil for Joker, and that’s not what this movie is. It’s not nearly as edgy as it thinks.

Did you see Joker? What did you think happened to Sophie? Let us know in the comments.