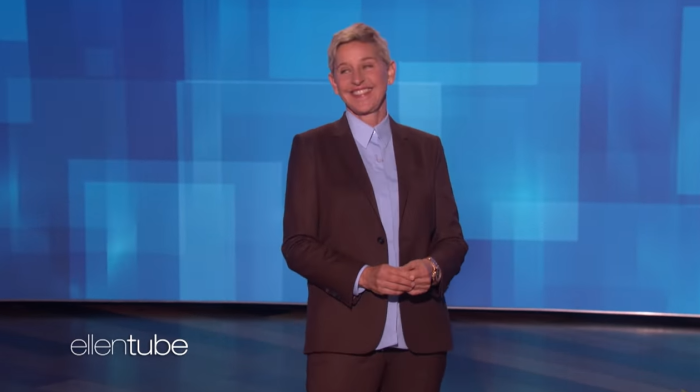 We have plush leather seats!

We serve Friendship Is More Important Than Politics steak!

The wheel of time turns, humanity spins ever onwards towards oblivion, and in all that confusion Ellen Degeneres has managed to put her foot somewhat unfortunately into the ongoing furore over her apparently being friends with George W. Bush—an incident first posted about here in Lainey’s Plove, and later covered by me. Here’s Ellen, providing the context on the situation, and which I guess was meant to make everything okay:

Yes, that was me at the Cowboys game with George W. Bush over the weekend. Here’s the whole story. pic.twitter.com/AYiwY5gTIS

"I'm friends with George Bush. In fact, I’m friends with a lot of people who don’t share the same beliefs that I have. We're all different and I think that we've forgotten that that's OK," DeGeneres said. https://t.co/phcGag21rH

‘Views.’ Such a weightless, fluffy word isn’t it? Much more effervescent and frothy as compared to, say, ‘actions’ and ‘politics.’ Actions like, ‘mass murder’. And politics like, ‘hard right theocratic neoliberalism’.

But you know what, even that word ‘politics’ is sometimes used as a band-aid, or—what the late great George Carlin might’ve described as—a euphemistic softening designed to make language obscure a harder reality. It’s like those two lads—one wearing a Beto t-shirt and one wearing a MAGA one—who took a picture of themselves, embracing, and captioning it with the message that ‘friendship is more important than politics.’ I wrote that up when it happened and I’m gonna just quote myself here real quick so I don’t keep rephrasing the same point over and over again until my brains start leaking out of my ears:

There’s a lot going in that statement, bubbling just underneath the surface. Chief among it the abstract weightlessness given to the word ‘politics’, and its contrasting against the relative power given there to ‘friendship’. […] I find it’s helpful sometimes to substitute the word ‘politics’ with the word ‘power’. Politics is a term that has been intentionally made hazy and removed from reality. A political class that is itself detached from those they govern welcomes that kind of disengagement. ‘Power’ on the other hand is a term that everyone understands, and it is remarkably clear that power is not just a theoretical exercise. It has real, life-changing consequences. And here is the kicker: When those in power seek to do you harm, you are under no obligation to be friendly with them.

Disagreeing with friends that wear fur is not the same as being friends with an anti-gay war criminal President that directly and negatively impacted millions of lives.

You could have just said you care more about maintaining your proximity to power than you do the millions of lives this man destroyed.

My favorite part of Ellen’s non-apology for hanging out with a war criminal was when she promoted the new iPhone. Pretty cool. pic.twitter.com/gbq8fL9t0W

Sorry @TheEllenShow , couldn't disagree more. In 15 years this is how they will rationalize yucking it up with Trump. There are countless dead Iraqi children who aren't here to laugh along with you. https://t.co/IrVH6d7p0v

“I’m kind to the guy who is responsible for the deaths of half a million Iraqi civilians. As long as you dance and make cute jokes, it’s all okay.”

Nice to be reminded that the rich, regardless of how woke they are, will always side with fascists in the end.

He's a war criminal, responsible for millions of dead Iraqis..

But kindness or whatever..
🙄

Just because Ellen doesn’t agree with someone knowingly lying the world into an illegal war that cost the lives of over a million civilians and created endless chaos and terror for the entire region —> more endless wars of our MIC, it doesn’t mean she can’t be friends with them. https://t.co/wYyUMoF4d9

reducing the problem with George W Bush to “we have different beliefs” is folksy disingenuous malarkey! He used his structural power to commit some of the most heinous acts in American history!

one more point about this: it's not as if Ellen and GWB were lifelong friends who refused to let politics come between them! They only met once they were both wealthy and powerful, and developed a friendship after the fact. https://t.co/q50lrdnHel

“Look, I’m too rich for his decisions to really affect me.” Is what this boils down to.

think of the poor Ellen Show interns who spent all of yesterday looking for a positive tweet and then finally stumbled onto this pic.twitter.com/JugQ2YeUqd

listen up wokesters: say what you will about ellen, but i’ve had ENOUGH of this cancel culture that goes after decent men like george w. bush just because they launched an illegal war, drowned a city, and brought the world to the brink of a second great depression.

I don’t know who needs to hear this but “some people are less human than others and don’t deserve basic rights” is not merely a difference of opinion.

You know what the best part is?

They made that the video title:’This Photo of Ellen & George W. Bush Will Give You Faith in America Again’ 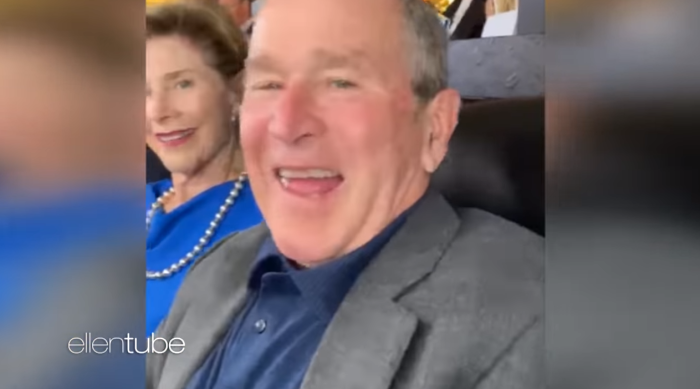 ← Trumpdates: White House Blocks Diplomat from Speaking to House, GOP is 'Freaking Out' | This Homemade Water Slide Looks Like the Most Fun Ever →

Image sources (in order of posting): YouTube, The Ellen Show