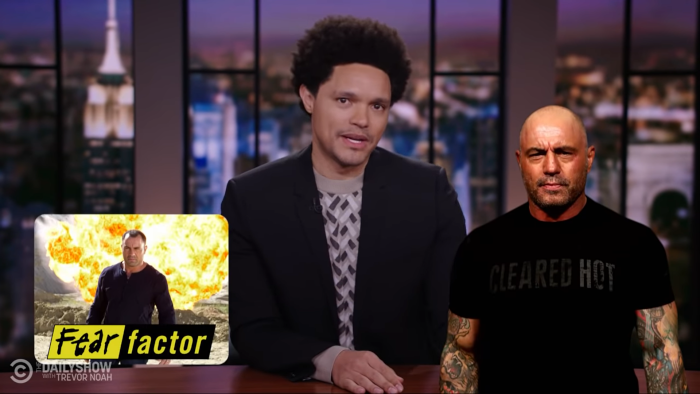 The word “context” has gotten a lot of play recently. When a montage of Joe Rogan using the N-Word went viral (because why should 2022 be any better than the last two years), Rogan was quick to apologize. His fans were quick to have his back. Some were mad he apologized, insisting that context was needed. Rogan has become, if nothing else, a pretty reliable Rorschach test for identifying idiots. That said, Trevor Noah took some time on The Daily Show to point out one of the most glaring things about Rogan’s apology.

Rogan apologized for using the n-word, saying he wasn’t using it in a racist way. That’s a favorite defense for white people. “It wasn’t racist, it was (insert bullshit excuse that likely includes rap music here).” Even if the usage isn’t intended to be racially motivated, the reaction it will get always is. Just don’t say it, white people. That song you feel you have to sing along to will sound just as good if you pause for half a second.

Again, this wasn’t even what stuck in Noah’s craw the most. His biggest problem was Rogan calling a movie theater full of Black people “like Planet of the Apes,” apologizing for saying that, but claiming it wasn’t racist. Even though, when he originally made that comment, he immediately admitted it was racist! It’s yet another example of my least favorite trend: people getting caught on video doing or saying shitty things and then addressing said video like we didn’t all see it. It’s incredible gaslighting.

As Noah points out, people are more afraid of being labeled a racist than doing racist things. You’d almost think that one will likely affect them more than the other.

“When Joe Rogan says, ‘I wasn't being racist. I was just being entertaining.’ - No, Joe, I think you were using racism to try to be entertaining.” -Trevor unpacks Rogan's N-word and Planet of the Apes apologies pic.twitter.com/AKAJGDABKz


← The Trailer for A24's 'Men' Will Unnerve You to the Bone | Jimmy Kimmel Is Unhappy with that 'Don't Look Up' Nomination, Too →