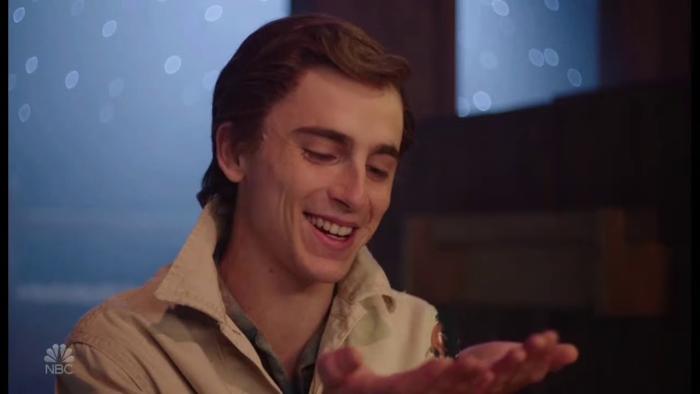 Cold Open — Kate McKinnon and Heidi Gardner come out as Anthony Fauci and Deborah Birx to discuss the roll-out of the vaccine. It is lightly amusing, and disappointing only in the respect that Brad Pitt didn’t reprise the role, and Anthony Fauci didn’t make an appearance himself. On other hand, the cold open didn’t feature either Jim Carey’s Joe Biden or Alec Baldwin’s Trump, so I’m calling it a win. (Score: 5.5 out of 10)

Timothée Chalamet Monologue — Not a fan, but I’m going to restrain myself. Chalamet grew up in New York (in fact, his mother appeared in the background of a “Massive Headwound Harry” skit back in the day), and he reminisces about the greatness of the city over a piano. Pete Davidson joins him to contrast Staten Island with “New York City,” and that’s about it (although, it would be the first of many pairings with Pete Davidson tonight). Not a bad monologue, but not a memorable one, either. (Watch Here) (Score: 4.5 out of 10)

A Rona Family Christmas — The Coronavirus is anthropomorphized into a family and their friends (oral and genital herpes), which means a skit full of virus puns. So many bad puns. Chalamet plays the black sheep of the family — the strain that went to New Zealand and barely infected anyone. Yikes. (Watch Here) (Score: 3.5 out of 10)

Lexus Commercial — A husband buys her wife a Lexus for Christmas, and she goes ballistic because he makes an extravagant purchase without consulting her. He’s unemployed. She’s furious. And the neighbor to whom the husband is indebted ain’t happy, either. (Score: 4 out of 10)

The Dionne Warwick Talk Show — Dionne Warwick discovered Twitter this month, became a huge Twitter sensation for making fun of young musicians. She is now being lovingly parodied on SNL by Ego Nwodim. Chalamet plays Harry Styles, and Chloe Fineman plays Chalamet, and I like Chloe Fineman’s Chalamet more than Chalament’s Chalamet. This skit, meanwhile? I don’t hate it. (Score: 6.5 out of 10)

The Farm — A family has to sell the farm, and the son (Chalamet) sings a song about losing his tiny horse. The skit has some very Kyle Mooney energy. There will be people who love this skit. I am not one of them. (Score: 5 out of 10)

Weekend Update — Kate McKinnon recurs as Dr. Wayne Weknowdis, who answers most of the questions with “We know dis” or “We don’t know dis.” It’s a terrible character, and yet Kate McKinnon makes it work, often while breaking character. Melissa Villaseñor plays a character who says she is not doing an impression of Dolly Parton (she is definitely doing an impression of Dolly Parton). It’s a good impression, but not a particularly good segment (Watch Here). Jost and Che, meanwhile, are decidedly lukewarm tonight. (Score: 5 out of 10)

Holiday Baking Championship — It’s that recurring skit where the contestants make really bad cakes, one of which inadvertently looks like a butt spewing liquid poo, and another that is an actual penis. It’s a really bad skit, and yet also inexplicably funny. Definitely the Mat skit of the week. (Score: 6 out of 10)

XXL Rap Roundtable — Questlove (playing himself) and Queen Latifah talk about the rap industry with two characters played by Pete Davidson and Chalamet who learned rap from TikTok, spout a lot of nonsense, and say “yeet” a lot. It’s a bad skit, but people who spend a lot of time on TikTok and like to say “yeet” are probably going to appreciate it. So, your teenage kids. (Watch here) (Score: 3 out of 10)

Sportsmax — Sportsmax is the sports spin-off of Newsmax. It conjures for its viewers an alternate reality where the winless Jets are good. The idea is better than the execution, but’s it’s a good parody of Newsmax and Trump supporters, and a solid 10-to-1 skit. (Score: 6.5 out of 10)

The show came in short, so there’s a super weird and awkward sign-off where Chalamet had to fill 30 seconds and quoted Harry Styles saying something about being kind to people. I’m not sure Chalamet is particularly bright. Also, Kenan was neither in the show nor at the sign-off. He wasn’t in last week’s episode, either, except in a pre-taped segment. Where is he? Presumably, he is fine, because he engaged with a Dionne Warwick tweet right before the show started.

Perhaps Kenan is working on his sitcom, “The Kenan Show,” which is supposed to launch in 2021, or the Home Alone remake for Disney+. Or maybe he was a close contact or was exposed to someone and is in quarantine. He’s not the only regular to miss a lot of time this season, though. Cecily Strong didn’t join the in-person cast until last week, and Aidy Bryant has been out all season (filming her Hulu show).